Chance Warmack will start at LG in place of Isaac Seumalo, it now appears

On Tuesday, Philadelphia Eagles offensive coordinator Frank Reich indicated that LG Isaac Seumalo would not lose his starting job after a down performance Week 1 against the Redskins and an absolutely dreadful outing Week 2 in Kansas City.

"If that happens over five, six, seven games, then it becomes a problem and you evaluate it," Reich said. "When it happens in one game, you say, OK, we take note of it, but we have a lot of confidence. We've been working hard. We believe in our guys. So whether it's Isaac or whether it's another guy, it happens in this league. We fight to get better, and then you evaluate over the long haul." 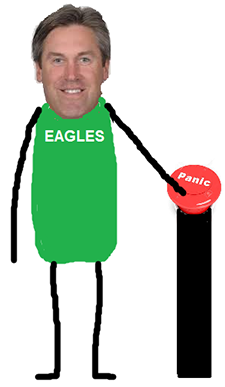 On Monday, Doug Pederson said the Eagles wouldn't panic in regard to a potential benching of Seumalo.

"Experienced backups are great to have, but at the same time, I don't want to push any panic buttons at this time," he said.

After getting reps with the first-team offense in practice today, Warmack himself would not confirm that he will indeed take over for Seumalo at LG Week 3 against the New York Giants, but several of teammates did in the locker room on Wednesday.

"We don't know that," Warmack said. "Whatever the team asks of me, I'm here to do whatever they need me to do. I'll go on both sides, so we don't know what's gonna happen."

Warmack was a dominant player in college for the Alabama Crimson Tide, paving the way for running backs Mark Ingram, Trent Richardson, and Eddie Lacy, collecting two BCS National Championships along the way. He was a first-round pick, 10th overall, in the 2013 NFL Draft. In Warmack's four-year NFL career, he has played in 48 games, starting all 48.

In 2016, Warmack had surgery on his right hand, which cost him all but two games that season. Curiously, he signed a $1.51 million deal on the first day of free agency, a clear indication that teams around the league did not value him. Even more curiously, the Eagles signed Warmack to a one-year contract extension worth up to $5 million.

That move suggested perhaps that Seumalo would eventually move to center in 2018 to replace Jason Kelce, paving the way for Warmack to start at LG. The plan to start Warmack seems to have accelerated.

In 2016, Warmack struggled mightily with the Tennessee Titans, as we showed in a film breakdown back in April. The Titans showed little interest in bringing him back after that season. In Philadelphia, Warmack reunited with former Alabama offensive line coach Jeff Stoutland, now the OL coach of the Eagles.

Seumalo was a third-round pick in the 2016 draft that the Eagles were high enough on this offseason to feel comfortable moving on from veteran Allen Barbre, who is now starting for the Denver Broncos.

We'll see soon enough if Seumalo can bounce back from his demotion, and whether or not Stoutland has been able to get Warmack ready to play this Sunday.