When it was time for the sixth enshrinee of the night, Ahmad Rashad couldn’t make it through his introduction before the cheers rained down from the balcony. Symphony Hall in Springfield, Massachusetts turned into the Wells Fargo Center circa 2001 (so, the First Union Center). The energy in the room had jumped up a few notches.

Allen Iverson is now officially a member of the Naismith Memorial Basketball Hall of Fame, and man, does it feel good to type that. In what should come as a surprise to no one, The Answer’s induction speech (all 30 minutes of it!) was an instant classic.

Iverson, looking dapper in a black suit, poured the same emotion into his words that he played with every single night he put on that ugly Sixers uniform. If this wasn’t a record for the most “thank yous” in a single Hall of Fame speech, it came damn near close.

He thanked what seemed like every member of his family, singling out his wife Tawanna at the very end. He thanked a bunch of his friends. He thanked his college coach, John Thompson. He thanked a plethora of teammates, coaches, and anyone affiliated with the Sixers during his time in Philly. He thanked the local media, including the late, great Phil Jasner. He thanked the Philadelphia fans, which predictably caused more MVP chants:

(Full disclosure: If I was there, I would’ve been chanting with them.)

This being Allen, he thanked a bunch of rappers (Biggie, Tupac, Cam'ron, Jadakiss, etc.) “for being his theme music" throughout his career. Iverson singled out Michael Jordan, who he somehow managed to successfully compare to Rick James in the famous “Chappelle's Show” skit. Also included was a great story about Tyronn Lue, who he memorably stepped over in Game 1 of the 2001 NBA Finals. 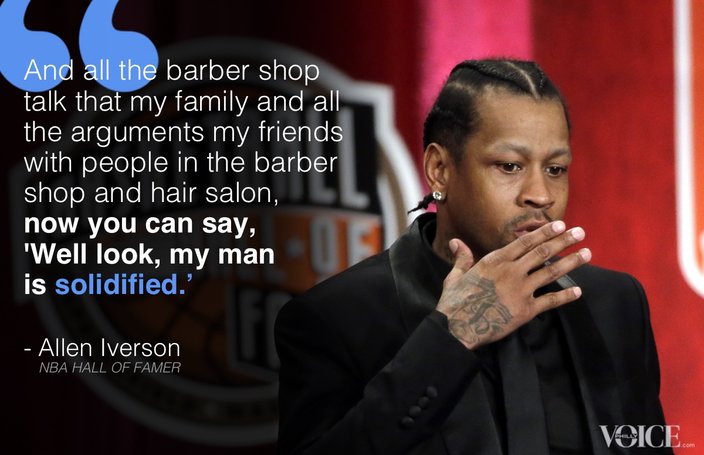 “The ones that stuck by me throughout my journey, I love y’all and I love the fact that now y’all can walk around and stick y’all chests out and say y’all Hall of Famers,” Iverson said at one point.

Solidified. For the 5’11”, 165-pound dynamo that continued to attack the rim at full speed through every injury imaginable, the guy who never stopped attacking, that’s pretty perfect.