A South Jersey man's journey from pills to heroin

Like so many suburban addicts, habit started with painkillers and then to smack 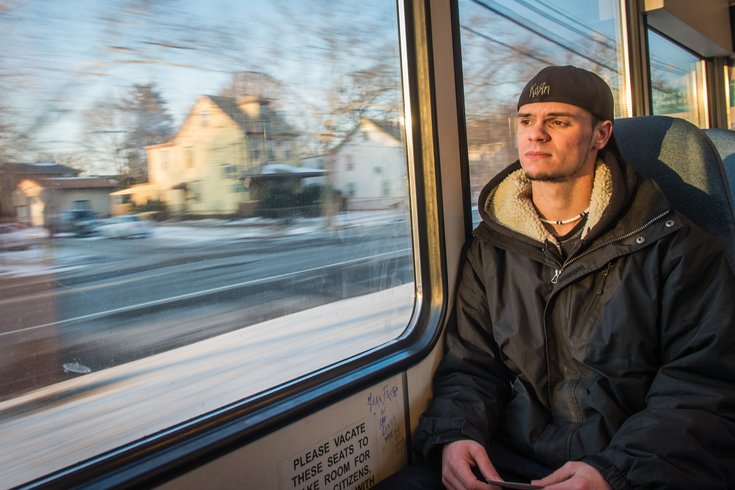 Joseph Miller takes the train to the city to supply his habit. He describes the sound of the light rail horn as the dinner bell for his addiction.

For Joseph Miller, the suburban RiverLine is his lifeline.

Miller, 28 and the father of a year-old son, has been addicted to heroin for the last four years and rides New Jersey Transit's commuter train daily to get his fix.

“I hate the RiverLine,” Miller says. “I hate the thing, I really do. I don’t even like hearing it ... just hearing the thing is like ringing the fucking dinner bell for me. That’s how an addict’s mind sees it. I associate it with getting drugs.”

At about six feet tall and skin and bones, Miller, who lives with his parents in the middle-class community of Riverside, admits he’s not very strong, and could use an extra 40 pounds on his frame, “especially in this cold,” he says through chattering teeth.

But there’s a growing flame in his eyes. They burn with hunger.

He’s going to Camden on a frigid Sunday night in February. With shoulders hunched and knees quivering, he's waiting to catch the light-rail train.

A pair of headlights emerges from the north. He shuffles closer to the tracks. 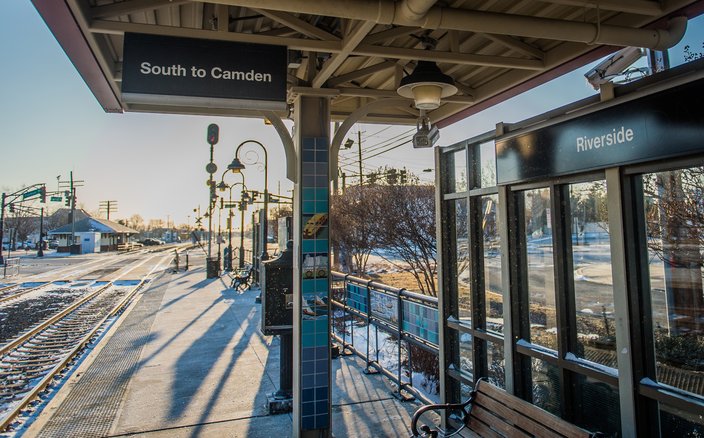 The Riverside station of the New Jersey Transit Light Rail is the starting point for Joseph Miller's trips to Camden. The light rail is commonly used by addicts in search of drugs. (Bryan Woolston / For PhillyVoice)

Miller is part of a growing epidemic in South Jersey's river wards that have been ravaged by opioid addiction. In the last decade, suburban Riverside and its neighbors have seen a dramatic rise in not only the number of addicts, but in opioid-related overdoses and deaths, and drug-related crimes.

There were 741 heroin-related deaths in New Jersey in 2013, a 160 percent increase since 2010, the state Attorney General’s office reported. Suburban Burlington County saw nearly 300 drug-related overdose cases, more than half of which were from illicit drugs, according to the county’s Freeholder’s Office.

Burlington County’s Victorian-styled towns along the Delaware have been more susceptible to heroin’s vicious grip – in part, because of the RiverLine, which operates down the state’s jagged western edge, police say. Built in 2004, it connects Camden and Trenton, stopping in these villages along the way.

“The light rail has driven a lot of the way we have to police,” said Riverside Police Chief William Eliason. “Twenty years ago, when I started here, I knew every single person. We never saw needles, we never saw heroin, [but] over the last five years, it’s just exploded. Most of it's come from transients getting off and on the RiverLine.”

A RiverLine ticket is about $1.50, but it’s a fare that’s easily evaded. The RiverLine operates on a Proof-of-Purchase system that requires on-board transit employees to check riders’ tickets. Punishment for not having a ticket is getting booted from the train and a nominal fine, but more often than not, transit police aren’t on board to enforce the rules. So users hop on and off for free, mostly without repercussion.

Three years ago, several area police departments along the RiverLine’s service area teamed up with New Jersey State and Transit police forces to combat petty criminals who used the light rail to escape capture or to score narcotics.

Jean Stansfield, sheriff of Burlington County, said her department was part of the drug task force, but needed to pull out for lack of funding. Ultimately, the demise of the task force was due to a scarcity of funding and resources, she said.

When PhillyVoice initially contacted Snyder for comment on its role in the growing opioid epidemic ravaging South Jersey, she said “All we do is provide transportation.”

Since that time, Snyder has expanded her view of the agency's role: “The goal for the NJT Police Department is to crack down on all criminal activity,” she said. “We work in coordination with other law enforcement agencies in all matters relating to criminal deterrence.”

When told that transit property is littered with used needles and empty heroin baggies, Snyder reiterated the “coordinated effort” among local, state and federal law enforcement agencies, adding that the transit service patrols the lines daily for all criminal activity. She said she couldn’t elaborate on specifics in its policing methods nor offer statistics on the number of arrests or rate of crime on transit property over the years.

She added that “heroin use is prevalent throughout the state and country, not just South Jersey.”

While Eliason and his officers say they have been able to stave off dealers’ attempts to move into Riverside, they haven’t been fully successful in stopping addicts from taking the train south to get their fix.

So addicts, including Miller, continue to make their daily low-cost to no-cost pilgrimage to Central Camden or nearby Pennsauken, scouring streets for free samples in the early morning hours, stalking corners looking for the best “stamp,” or brand of heroin, or trading clean needles for cash or pills. 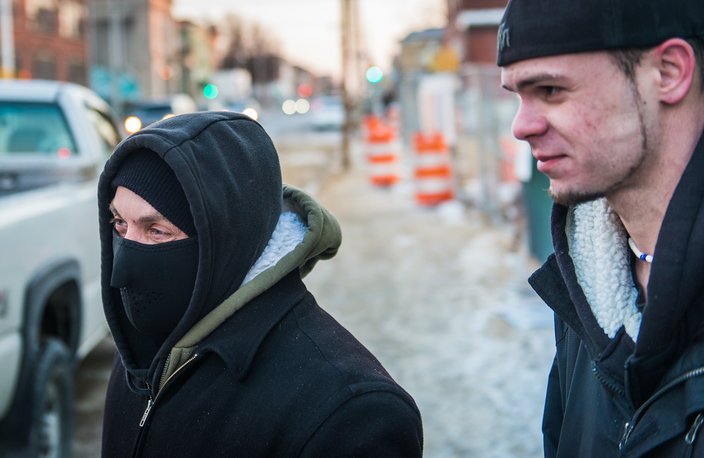 Heroin addict Joseph Miller, 28, right, of Delran, Burlington County, stands with "Bush," a fellow addict. The two talked about where they should go to buy the best product on Camden's drug market. (Bryan Woolston / For PhillyVoice)

THE SEARCH FOR SUBS

On a freezing Sunday night, Miller takes his usual route to Camden. Just blocks down Broadway, he makes a friend.

“Got any subs,” a squatty guy mumbles as Miller walks past.

Subs, street slang for Suboxone, are often preferred over dope for when withdrawal symptoms get bad, Miller later says. But for now, he and his acquaintance, who only goes by “Bush,” are talking shop.

Miller tells him one stamp, “Best Buy,” is decent, and directs him across the street, where subs might be available. Bush, 36, has been using for 21 years. His daily journey for a fix starts in Burlington City, and ends where Miller’s does.

But Bush doesn’t stay long; his eyes, pinkish and puffy from withdrawal, are on a mission, scanning the street for a solid source.

While dope is still easy to cop in Camden – dealers and their minions stand on street corners, offering goods to passers-by like bazaar entrepreneurs announcing cheap wares to tourists – the trade has migrated north into nearby Pennsauken, after Camden County cops and state investigators launched a renewed offensive against the city’s deeply embedded, cyclical drug epidemic.

In September, 42 alleged drug dealers in and around Camden were indicted in a state-wide crackdown of a cocaine and heroin ring headed by three brothers with ties to Mexican drug cartels.

Acting Attorney General John Hoffman said at the time that the brothers were targeted because of the open-air markets they allegedly controlled, which were a “primary source of heroin for suburban addicts, who easily accessed them from public transportation or the highway.”

Pennsauken, which spans three stops along the RiverLine before Camden's Walter Rand Transportation Center, now draws in these suburban addicts, promising greater safety than Camden while still accessible from the train. 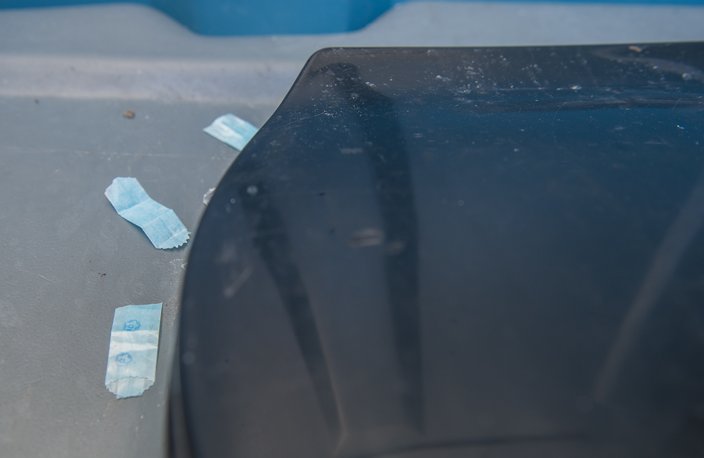 Baggies that once contained heroin, and are stamped with the street brand, litter the portable toilet at the 36th Street Station on New Jersey Transit's RiverLine. (Bryan Woolston / For PhillyVoice)

PhillyVoice met Erin, Paul and Mike earlier in February as they sauntered off the 36th Street platform, situated on the city line between Pennsauken and Camden. Paul, who’s been using for over a year after seven years clean and a stint in rehab, said he’s tired of the daily run.

“I went from doing it to have fun, to doing it because I’m sick,” Paul, 27, says, referencing withdrawal symptoms. “The point I’m at right now, I’m just tired … tired of running back and forth, of the money and the couple hours you’re gonna be sick, it’s just tiring.”

“It’s like the worst flu you ever had,” Mike cuts in. “Like a flu that’s gonna fucking kill you. It ain’t gonna kill you, but it feels like it.”

They unanimously agree that when they were younger, they never thought they’d end up shooting up narcotics.

It’s a common narrative among addicts. Prescription painkillers are easy to get from doctors or dealers, and the relaxed, warm state they bring keeps users coming back long after pain has subsided. But these pills, like Oxycodone, usually go for $1 per milligram on the street. A 100mg-a-day habit gets expensive – fast.

When money runs out, addicts turn to heroin, which promises a faster, stronger high at a significantly reduced price tag: $10 a bag, three hits a bag. A hit of heroin usually lasts about four hours, with the "high" peaking about two hours after shooting up. 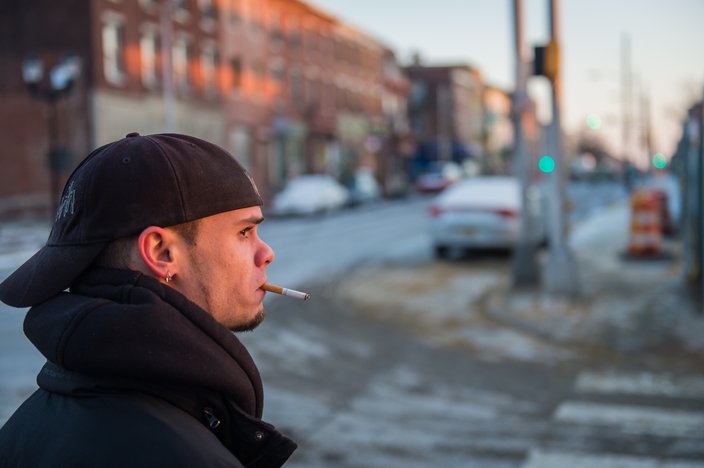 Joseph Miller walks the streets of Camden, where he feeds his drug addiction. He has overdosed twice. (Bryan Woolston / For PhillyVoice)

FROM HEAVY LIFTING TO HEAVY CHOICES

Miller was working in an ice-cream warehouse when he first started popping Opana, an oxymorphone painkiller. He says the drug helped him work faster and made him immune to the heavy lifting and warehouse’s crippling cold. But when the ice-cream manufacturer laid him off, money was tight and his cravings unavoidable.

Anywhere from two to six bags of heroin took the place of Miller’s usual two-pills-a-day habit. For cash, he’s asked his parents for $10 “for a movie,” and pawned his video games and consoles.

Still unemployed, Miller’s not opposed to an honest day’s work, either.

“When it snows, I shovel, stuff like that,” he says, but is quick to add that he’s never stolen anything.

When money’s scarce, Miller explains that a lot of addicts will sell their bodies.

“There’s people that sell themselves. That’s probably what astonishes me the most … They’ll be sucking dick to get like, 20 bucks.”

“There’s been people that come up to me, and it’s always guys, it’s never like a hot girl,” he laughs. “I had this one dude, a Marine, and this dude looked like fucking Hercules, like the black fucking Hercules.”

The pair took the RiverLine to Black Hercules’ house in Edgewater Park. Miller unzipped his pants and went through with it but escaped before his client could take the encounter further.

He’d been clean five days after a stint in county jail, and thought he could handle his usual dosage. Riverside police officers administered Naloxone, an overdose antidote that elicits immediate sobriety. On a stretcher, getting pushed into an ambulance, he came to.

“That was a wake-up call,” he recalls.

Miller wants to get into an in-patient rehabilitation program and get clean for his son. 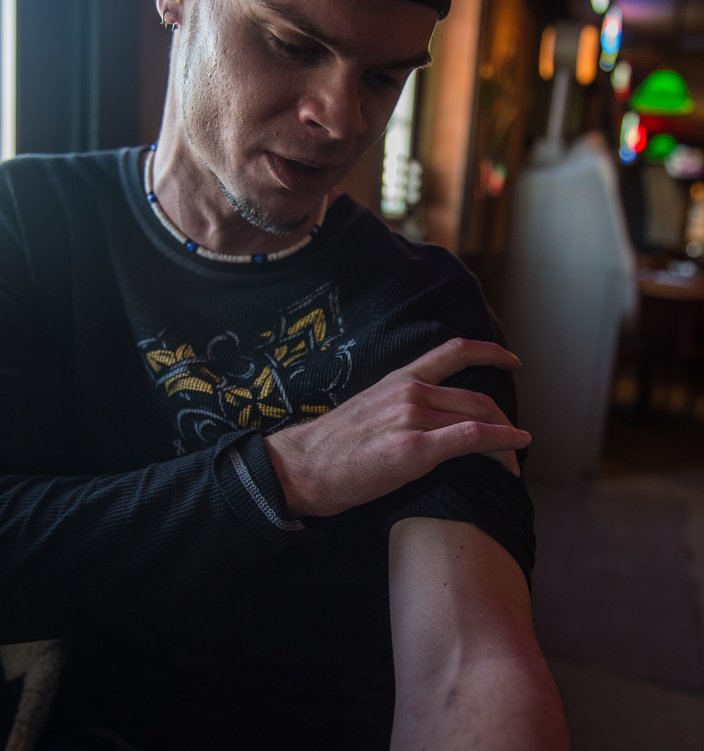 Joseph Miller shows the tracks of his addiction.  (Bryan Woolston / For PhillyVoice)