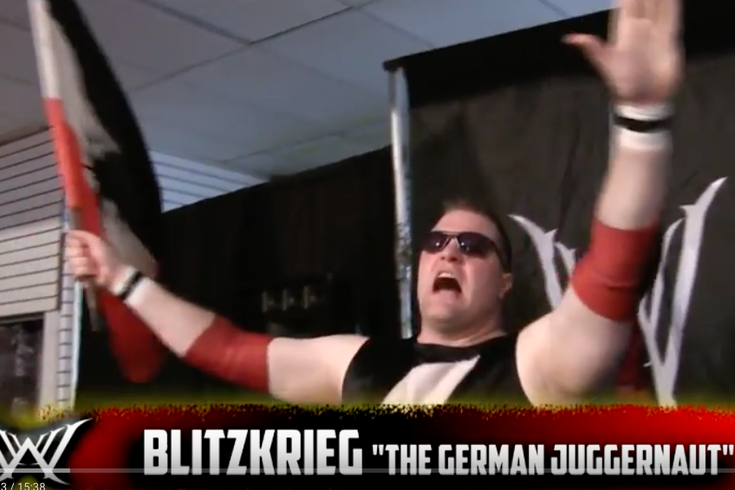 Videos posted online of Kevin Bean show the Montgomery County teacher – and independent wrestler who goes by the stage name of 'Blitzkrieg the German Juggernaut' – before a recent match in Quakertown, Bucks County. During his entrance Bean can be seen waving a flag with a German cross and doing the Nazi salute, and heard shouting 'Sieg heil.'

The Spring-Ford Area School District has decided to retain Kevin Bean, the sixth-grade teacher who moonlights as a professional wrestler with a Nazi persona, following an investigation, according to an email sent to parents on Aug. 8.

The district, which serves students in Montgomery and Chester counties, initiated an investigation in late July after a social media post about Bean and his wrestler's character went mildly viral, and his real-life identity and occupation were revealed.

In a letter to parents, Dr. David R. Goodin, superintendent of Spring-Ford Area School District, said that based on the investigation the district “found no evidence indicating violation of board policies by Mr. Bean. As such, Mr. Bean will continue to remain a teacher within the District.”

The letter included an apology from Bean, 36, who has been employed by the district since 2004:

“The character I portrayed did not reflect my personal feelings or beliefs and I do apologize to those in the community who were offended by such actions. I have spent many years working in the Spring-Ford community and pride myself in providing an exceptional education to my students over the course of 14 years.”

Goodin said the actions demonstrated in the video by Bean — in which Bean waves a flag adorned with the German Iron Cross and uses Nazi salutes, including shouting “Sieg heil” — are not supported or sanctioned by the district. Goodin said the district will work with its staff “so that we may continue to uphold the high standards our community has come to expect.”

A group of about 30 parents, calling themselves the Spring-Ford Parents for Racial and Cultural Awareness, responded to the letter and the apology in an open letter of its own, both of which the group feel “fail to acknowledge” the offense of Bean’s actions.

“In this particular cultural climate, where the symbol that echoes the atrocities on the Jewish people is being used to incite white nationalist sentiments across our country,” the group wrote, “this situation needed to be an opportunity to affirm the character of Spring-Ford School District, our commitment to diversity and a strong rebuke of those actions.”

"I think their actions, inactions, and investigations were a sham. I think they were more concerned about legal costs for wrongful termination." – Andrew Rosenbloom, parent and member of the Spring-Ford Parents for Racial and Cultural Awareness group

The group called for the school district to publicly clarify its commitment to creating an inclusive and diverse community, as well as its stance on white nationalism and hate speech. The group also called for a public forum to discuss issues of race, for a district policy of public conduct for teachers and employees, and an outline of specific actions during the upcoming school year to address and encourage diversity.

Andrew Rosenbloom, a member of the group and parent of two daughters, told PhillyVoice he believes Bean should've been fired, or at least re-assigned to a non-teaching position.

"I think their actions, inactions, and investigations were a sham," Rosenbloom said Tuesday of district administrators. "I think they were more concerned about legal costs for wrongful termination."

Rosenbloom said he doesn't think someone like Bean, who should be a role model for his students, should be able to act the way he does and then go into work the next day to teach children.

"I think it's extraordinarily irresponsible," Rosenbloom said of the district's decision.

Rosenbloom also said the district provided "no real clarity" to parents on whether Bean will stop using the persona.

The wrestling promotion Bean is involved in, the World Wide Wrestling Alliance, held an event on Saturday night, its first since Bean came under fire last month. It’s unclear whether he wrestled in the event. The WWWA did not respond to requests for comment.