Study: Exercise beneficial for mom and baby during pregnancy 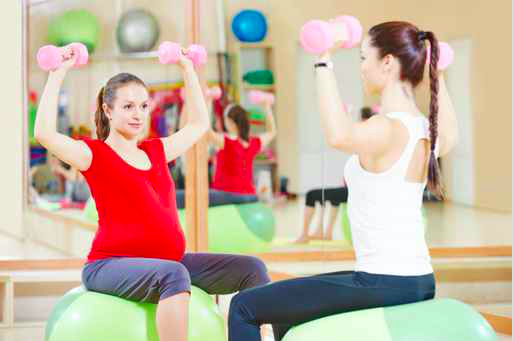 A new large-scale study led by researchers at Thomas Jefferson University confirms that vigorous exercise, contrary to historical belief, can be particularly beneficial to pregnant women and their babies.

Women were once advised to avoid prenatal exercise out of fear that it could cause pre-term birth, but when Dr. Vincenzo Berghella and his colleagues at the Sidney Kimmel Medical College pooled data from nine different randomized controlled studies, they found several advantages for pregnant women who engage in physical activity.

“The thinking was that exercise releases norepinephrine in the body, which is a chemical that can stimulate contractions of the uterus, and thus lead to preterm birth,” Berghella said. “But numerous studies, including this new meta-analysis, have since shown that exercise does not harm the baby, and can have benefits for the mom and baby.”

To complete their analysis, researchers divided 2,059 women into two groups. Approximately half (1,022) women exercised for 35-90 minutes 3-4 times per week for 10 weeks or up until their delivery. The other group (1,037) didn't exercise at all. All of the women were carrying a single baby, had a normal starting weight and had no existing health conditions that would prevent them from exercising.

The clinical review found that exercise caused no significant increase in prenatal birth, defined as delivery before 37 weeks, in the women who exercised compared to those who didn't.

In fact, many of the women who exercised while pregnant experienced a few benefits. Among the group that exercised, 73 percent delivered their child vaginally. In the group that didn't exercise, that rate was 67 percent. There was also a lower rate of C-sections among exercising women — 17 percent required the operation compared 22 percent of non-exercising women.

“The results of this analysis support current guidelines from the American Congress of Obstetricians and Gynecologists (ACOG), which sets the recommendations for our field,” said Dr. Berghella. “However, there are many reasons women pull back on exercise during pregnancy – discomfort, an increase in tiredness and feeling winded by low-level exertion. This paper reinforces that exercise is good for the mom and the baby and does not hold any increased risk preterm birth.”

Several other studies and self-reports have found that pregnant women experience boosts in mood, better sleep health and fewer aches and pains when they exercise. There's also evidence suggesting that women who exercise while pregnant have an easier time getting back in shape after birth.

Women are encouraged to discuss exercise with their doctor prior to developing a fitness plan. Here are some tips on safety and a list of recommended exercises, varying by trimester, for pregnant mothers.

The Jefferson study was published in the American Journal of Obstetrics and Gynecology.