Even if the weather is not going to cooperate in Philly, there's another way to check out the rare lunar event 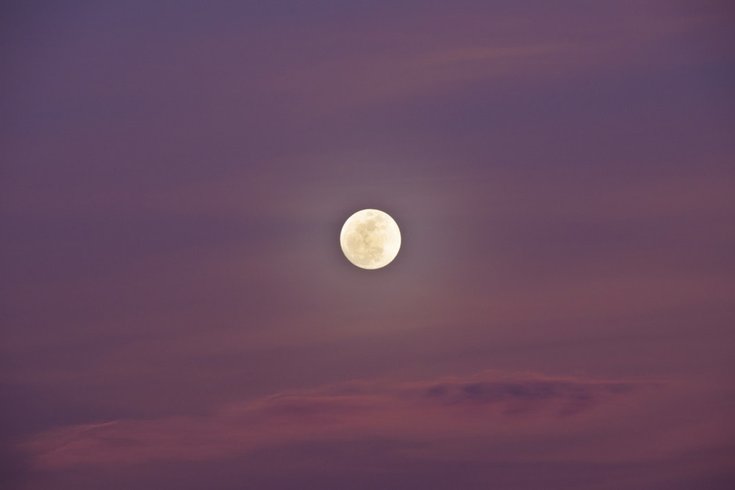 The Super Worm Equinox Moon is a rare trifecta comprised of the third and final supermoon of 2019; the first full moon of March; known as the "worm moon"; and a full-moon occurring on the spring equinox.

The Super Worm Equinox Moon could be visible in the night sky tonight over the Philadelphia region on Wednesday night. The rare lunar spectacle is a trifecta comprised of the third and final supermoon of 2019; the first full moon of March; known as the "worm moon"; and a full-moon occurring on the spring equinox.

The equinox, signaling the start of spring on the Northern Hemisphere, will come at 5:58 p.m. The Super Worm Equinox Moon will be officially in full view few hours later, at 9:43 p.m.

If the sky is clear enough, the best time to take a look at the moon in its biggest, brightest form will be shortly after sunset, just as the moon begins rising. In Philadelphia, sunset takes place 7:11 p.m. Wednesday.

RELATED: Is Pluto a planet? New research says yes, though the debate rages on

The problem with seeing tonight's moon could be the weather. The early afternoon blue skies on Wednesday are expected to get increasingly cloudy as it gets later. And more clouds and rain are in the weather forecast for everywhere from Cape May to Philadelphia to Downingtown.

A supermoon occurs the moon reaches its closest orbit to earth while in a full-moon phase. The proximity caused the moon to  appear larger and brighter in the night sky. Tonight's supermoon is not to be confused with January's more epic-sounding Super Blood Wolf Moon. January's lunar event was characterized by its alignment with the sun, giving the moon a red-orange effect. Thankfully the event, despite speculation from questionable YouTube evangelists, did not cause the apocalypse.

Nonetheless, March's supermoon, the Super Worm Equinox Moon will be the he first supermoon to occur on the first day of spring in 19 years. The name "worm moon" comes from folklore tradition, describing the time when frosty winter ground melts due to warmer temperatures, causing earthworms to emerge at the surface.

In conjunction with the worm moon, a live stream of the event started at 12:45 p.m., live from Italy, will be available for broadcast through Virtual Telescope. And based on tonight's weather forecast in Philadelphia, it could be the best opportunity to see the Super Worm Equinox Moon.