Survey: How does Philly feel about Philly?

A new survey from The Pew Charitable Trusts categorizes Philadelphia into four types of residents, all with different outlooks on the city's future.

Suffering from a poor economy and feeling unsafe outside their own homes, the largest group is comprised of residents who say they distrust the police, feel racial inequality is alive and well and believe their government is inefficient.

The other three groups, all slightly smaller than the first, are composed of aging, diehard Philadelphians who live and breath their city, cautious millennials, and well-educated optimists.

These groups aren't traditional in terms of the way they were put together, and that was exactly the point, according to the director of Pew’s Philadelphia research initiative, Larry Eichel, who says it presents a way of "looking at Philadelphia based on attitudes rather than demographics."

The groups share some common ground, with many residents saying there needs to be more focus on neighborhoods and education in the city.

Pew's survey asked 26 questions about everything from schools to personal financials to the neighborhood residents call home.

Compiling those answers using a social science method called cluster analysis, the survey found the biggest group to be those who are poor and frustrated.

Just eight percent of them say they want to spend the rest of their lives in Philly. A little more than half believe the city is going in the wrong direction.

In addition, only 18 percent of dissatisfied residents believe police do their job properly and 41 percent believe they treat blacks and whites fairly. Six out of 10 didn't feel safe at night.

On the opposite side of the spectrum is a group of older, middle-class people, "the diehards," most of whom have spent a majority of their lives in Philly and, for the most part, plan to stay (95 percent).

Half of them are older than 50 and just 23 percent are younger than 35, and they generally believe Philly is on the up and up. 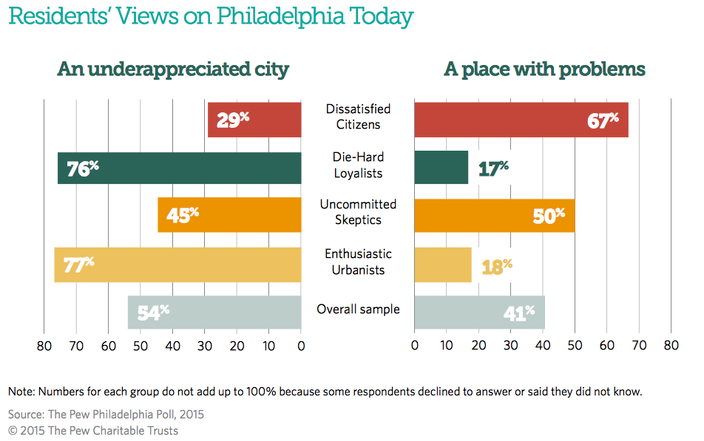 These diehards make up a quarter of the survey, are strong union supporters (64 percent) and believe the government doesn't do enough to help the poor (64 percent).

They themselves have modest wages – 78 percent reported a household income of less than $50,000 a year – and low levels of education, with more than half having a high school degree or less.

While the diehards say they're here for good, the "uncommitted skeptics" are just a job offer away from bolting town.

This mostly millennial group, the youngest of the four, also makes up 25 percent of the survey, and 97 percent of them would ditch Philly if the right circumstances came along.

Mixed on the city's status, a decent majority think the city's a good place to live (58 percent), but 41 percent say Philadelphia is headed in the wrong direction.

They share concerns about the police and are less likely than the other groups to want to stay, but most don't have trouble paying their bills. That's a key difference between the diehards and the skeptics, according to Eichel.

The skeptics aren't necessarily negative, but rather not yet sold on the city, Eichel explained. He also points out that they're more educated and better off financially than the diehards, but less thrilled with the city as a whole.

"The skeptics are sort of the surprise of the analysis," Eichel said. "They like the city in some ways, but would leave if presented with the opportunity." 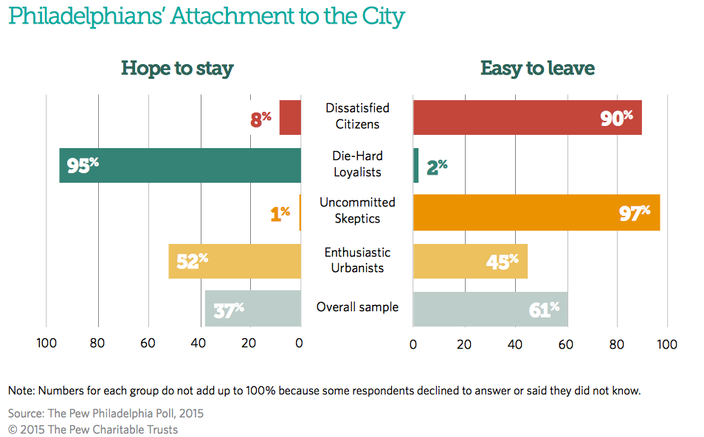 The smallest of the four groups – the "urban enthusiasts" – shares the diehards' excitement about the city's future. Yet despite many in this group calling Philly a great place to be, only 52 percent said they wanted to spend the rest of their lives here.

Unlike the diehards, who tend to believe the city should work on retaining new residents, the majority of the enthusiasts (69 percent) believe it's more important to attract new people to Philly.

The enthusiasts are the most educated, with 39 percent holding a bachelor's degree or higher, and they have the highest number of new arrivals, as 22 percent have lived in Philly for 10 years or less. 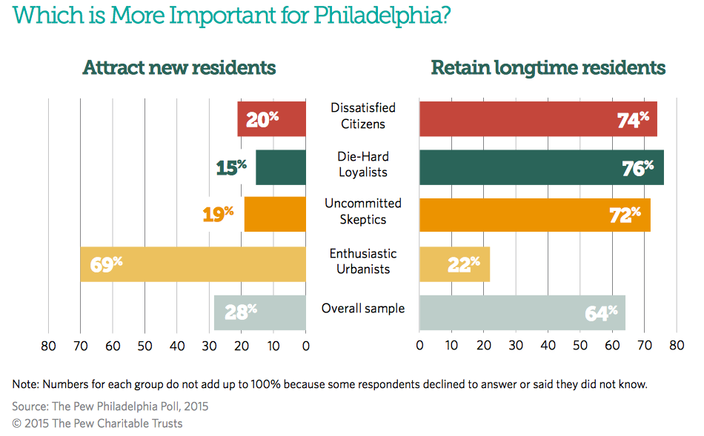 All four group said three issues – education, jobs and public safety – are most important. They mostly favor labor unions and believe immigrants better the community instead of creating problems.

Also, every group but the enthusiasts believe more work needs to be done in the neighborhoods instead of Center City.

Ultimately, Pew wants the study to be a groundwork for future research, and they want to know: which of these four groups do you fall under? You can take their new quiz and find out here.