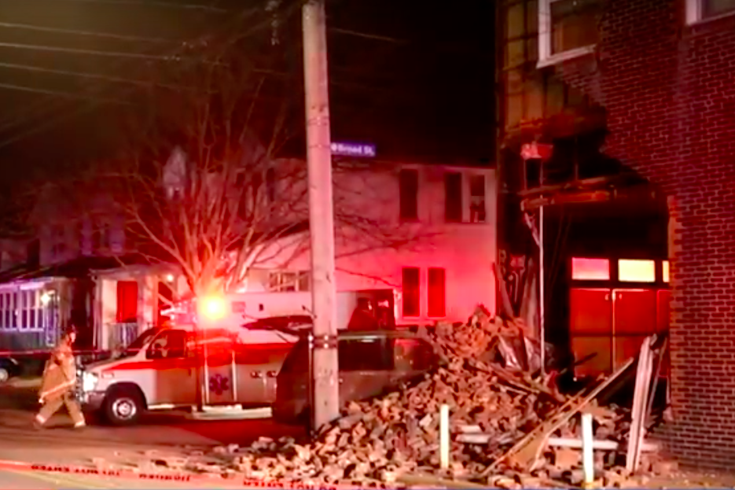 The crash left a gaping hole in the building and a pile of debris on the sidewalk.

A female SUV driver crashed her vehicle into a Delaware County apartment building early Friday morning, leaving a gaping hole in the building and a pile of bricks on the street.

Police said that the driver was heading southbound on Clifton Avenue nearby Broad Street in Collingdale when she attempted to make a U-turn at an intersection. She reportedly went onto a church lawn and crashed into a metal utility pole, preventing the car from flying into a nearby pizza shop, according to 6ABC.

The driver then drove into the brick apartment building on the corner of Clifton and Broad, sending a wooden support beam into the passenger side of the SUV’s windshield that almost hit the woman.

An SUV slammed into this Collingdale building at the corner of Broad and Clifton. The driver was helped out and taken to the hospital. Live reports this morning on @KYWNewsradio pic.twitter.com/NTEjj9QxcQ

Couple crews working now. One is working on boarding up the part of the building where the SUV crashed. The other is from Verizon doing work on the utility pole that was first hit. pic.twitter.com/kl6vcADXIb

SUV INTO BUILDING in #Collingdale #Delco Firefighters rescued the female driver & took her to the hospital. A man was inside the building, but got out safely. 2 families displaced. Collingdale’s fire chief says the driver also took out a telephone pole. No word on cause of crash. pic.twitter.com/P02XLc9cAU

Police and firefighters responded to the accident and pulled the woman from the car after she was trapped in the vehicle by debris. She was then rushed to the hospital for treatment.

“My daughter and them ran out. She went to check the young lady,” another eyewitness said to CBS 3. “She was like, ‘don’t move, we’re calling 911.’ She was strapped in the seatbelt. My daughter said her face was bloody. But my daughter said, ‘mom, she’s alive, she’s alive.'”

No one in the apartment building was injured, but the crash displaced two families. Both Verizon and PECO were called to the scene to fix the damaged utility power line.

THIS MORNING:
SUV into building.
Driver ping ponged into a utility pole, metal post and then crashed into the building, according to fire chief.
Broad & Clifton in Collingdale. https://t.co/Ge8VoOUnek@6abc pic.twitter.com/Wq3ZX4yALZ

CLEAN UP
The SUV has been pulled from the building, but still lots of work to do. Crews are securing the building and repairing a utility pole that was hit. @6abc https://t.co/Ge8VoOUnek pic.twitter.com/3ehAcYbYgF

Clifton Avenue between MacDade Boulevard and Spruce Street are currently shut down as a result of the crash, according to the Delaware County Daily Times.

BREAKING: A car slammed into a building on Collingdale Ave near Broad Street. @CollingswoodFD tell us the driver, a woman was taken to the hospital. Front of the building on the first floor is unoccupied. 2 families had to relocate—fortunately they were not hurt @FOX29philly pic.twitter.com/Cw9X2HvkU5

The cause of the accident is still under investigation by the police.