Artist from Pa. creates tree that can bear 40 different fruits 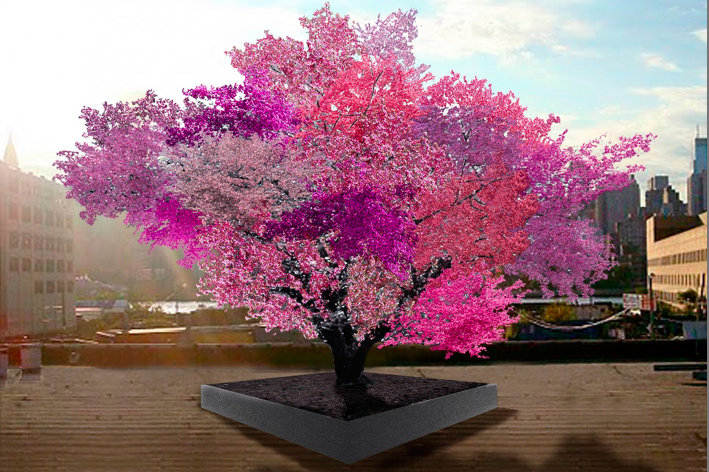 A Syracuse professor and artist who grew up on a Pennsylvania farm is capturing worldwide attention for his experimental work creating trees that can bear 40 different varieties of fruit.

Sam Van Aken, an artist and sculptor at SU's College of Visual and Performing Arts, designed the "living art" concept through a multi-year process called chip grafting, which involves slicing a branch with a bud from one tree and inserting into a slit in the branch of a "working tree" that bears a different variety of fruit, which Van Aken explains in the National Geographic video below.

The project gained attention when it became a symbol for the Syracuse 9/11 Memorial, planted on a university quad in hopes of yielding a variety of cherries, peaches, plums, nectarines, and apricots, Syracuse.com reports. Van Aken explained that he chose the number 40 because of its appearance in the Bible as a representation of bounty.

According to Epicurious, Van Aken now has 16 trees planted in museums, community centers and private art collections across the United States. He views it as part of a much larger project that could blossom into a new agricultural and conservation practice.

"As the project evolved, it took on more goals," he told the food site. "I realized that for various reasons, including industrialization and the creation of enormous monocultures, we are losing diversity in food production and that heirloom, antique, and native varieties that were less commercially viable were disappearing. I saw this as an opportunity to, in some way, preserve these varieties."