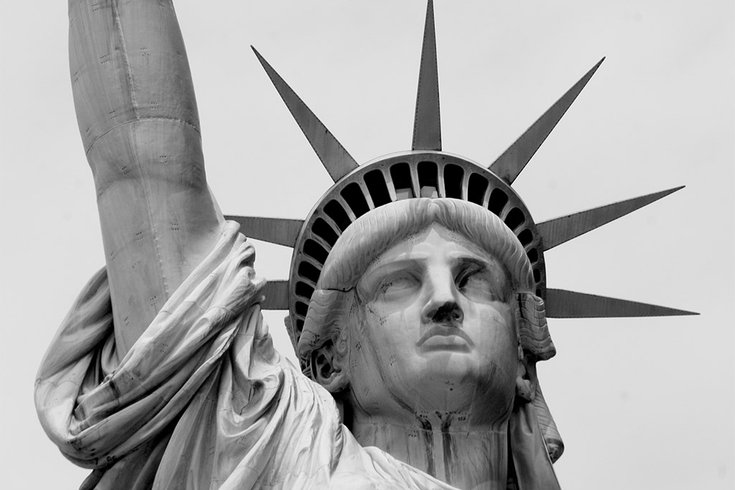 Photo by Fabian Fauth /on Unsplash

He looks up at me, curious.

“You know. Hijab is the headscarf our friends Fatima and Shabtha wear,” I explain.

My little one nods nonchalantly. We have a wide-ranging mix of friends. He frequently hears Spanish, Arabic and Portuguese spoken by guests who gather around our dining room table. He has played with children while visiting a local mosque and understands there are many ways of praying to God.

“Fatima and Shabtha’s families are Muslim,” I continue. “Our family isn’t Muslim, but I’m wearing hijab today to show how much I love them.”

A few minutes later, as we put on our shoes in preparation for another day of adventure, my son gently touches the soft cloth surrounding my face.

“This is a very difficult time,” states Yasmin Battat, an audiologist and mother of three from central New Jersey.

The morning after the San Bernardino terrorist attack, one of Battat’s patients came into her office. Battat recalls: “After a long pause, he looked at me and said ‘What is happening to our world?’ And we were both in tears. It’s like that with many of my patient’s today. The good in people’s hearts, that keeps me going.”

Certainly, the good in people’s hearts does provide the needed strength to keep beleaguered individuals and communities going.

In December 1993, a brick was thrown through the window of a Jewish family’s home in Billings, Montana. The family had displayed a treasured holiday menorah and anti-Semites attacked. It wasn’t long before thousands of Billings residents displayed menorahs in their windows as a sign of solidarity with their Jewish neighbors. Invoking “our dedication to the principle of religious liberty embodied in the First Amendment to the Constitution of the United States of America,” editors from the Billings Gazette wrote:

“We urge all citizens to share in this message by displaying this menorah on a door or a window from now until Christmas. Let all the world know that the national hatred of a few cannot destroy what all of us in Billings, and in America, have worked together so long to build."

In the wake of unprecedented political vitriol and extremist hate directed toward Muslim Americans, the time has come for all of us to actualize the good in our hearts and stand in needed solidarity -- in courageous unity -- as one American people.

The anti-Muslim climate in America is worse now than following the September 11 attacks. The Islamophobic statements made by key Republican presidential candidates serve to normalize anti-Muslim rhetoric and embolden those who act with hate.

Consider the severed pig’s head thrown onto the property of a Philadelphia mosque, vandalism at the Islamic Center of Palm Beach, Florida, the active recruitment by the Ku Klux Klan in Alabama to fight “the spread of Islam in our country,” and multiple shots fired at a mosque in Meriden, Connecticut. Sadly, these ugly acts represent only a small portion of a markedly increased number of hate crimes targeting our Muslim American community.

Furthermore, despite condemnation from the White House, multiple international leaders, and a growing chorus (finally) of Republican officials at home, Donald Trump refuses to repudiate his call to ban all Muslims from the United States. Instead, he threatens to run as an Independent should he fail to garner the support needed to represent the Republican Party in its bid to reclaim the presidency – an act sure to sever the once respected party of Abraham Lincoln. Whether running under the guise of independence or republicanism, there is no longer any doubt that Trump’s presidential campaign sustains itself by feeding off of the ignorance and xenophobia characterizing America’s paranoid and intellectually hollow far right. With regard to Trump, Ariana Huffington aptly notes, “we are no longer entertained.”

It is tempting to argue that the current expression of anti-Muslim bigotry is simply “un-American.” Yet, Omid Safi, Director of the Duke University Islamic Studies Center, argues: “The truth of the matter is that what we are seeing from Trump represents a facet of the ugliest part of what it has meant to be American…Which is why we have to reject it forcefully and decisively, no matter what end of the political spectrum we come from.”

Having taught Islamic Studies on the college and independent high school level for more than 15 years, I frequently receive emails or Facebook messages from family and friends stymied by an encounter with Islamophobia.

“Amy, a friend keeps posting things that are anti-Islam. She posted this pic and since I don't know enough to set her straight I was wondering if this picture she posted was even correct or if you could give me a link...”

My responses to such inquiries vary. Sometimes I’ll bring up activities I have had my students do. For example, I created a “guess the scripture” game wherein I provide students with a list of violent scriptural passages and ask them to guess which verses come from the Hebrew Bible, New Testament, or the Qur'an. Such activities allow for a needed examination of unconscious bias.

In my replies, I’ll frequently highlight the fact that one of the key teachings in Islam is “mercy takes precedence over wrath.” God's mercy and forgiveness are mentioned far more frequently than anger in both the Qur’an and the Hadith, the sayings attributed to Prophet Muhammad. To portray any religious tradition fairly, one must look at it as a whole, spend time reflecting with scholars who have devoted decades to the study, and avoid the temptation of polemic that only looks for the worst in confirmation of bigotry and bias.

In the effort to distinguish fact from fiction and mainstream Islamic scholarship from extremist interpretations, there are documentaries worthy of note that I often highlight. For example, The PBS documentary “Muhammad, Legacy of a Prophet,” features well-respected Muslim and non-Muslim scholars. The documentary highlights how Muhammad was born at a time of intense tribal conflict. This sets the needed stage for understanding verses in the Qur'an that deal with injustice, community defense, and war. The film highlights how Muhammad challenged the systems of oppression at the time. For example, he condemned the infanticide of girls and advocated for women to have a say in determining who they will marry.

It’s also important to be honest about areas of tension within the Muslim community. For example, do leadership roles reflect the ethic of gender equity? How are LGBT Muslims treated in mosques or families? How does one honor tradition in a rapidly changing world? One of the best ways to understand how mainstream Muslims reflect upon these topics -- issues of concern in all religious traditions today -- is to follow the social media posts of key American Muslim leaders. I often encourage people on Facebook to follow individuals like Dr. Ingrid Mattson, Eboo Patel, Shaykh Hamza Yusuf, Dalia Mogahed, Professor Omid Safi, or Imam Feisal Abdul Rauf. Furthermore, Georgetown University’s Prince Alwaleed Bin Talal Center for Muslim-Christian Understanding is a helpful resource.

I strive to behold the complexity of each individual’s identity. What do I see when I look at woman wearing hijab? What did people see when they looked at me?

I always conclude my remarks by suggesting that the best thing any American who isn’t Muslim can do is to meet and befriend American Muslims. Invite your Muslim neighbors to dinner. Go to the mosque and ask heartfelt questions. Poll after poll reveals that one of the most important factors in determining how positively a non-Muslim American views Muslim Americans is if the non-Muslim in question knows any Muslims personally. Finally, a clear understanding that America’s most significant domestic terrorism threat comes from white extremists is essential for we must acknowledge our collective fear and transform it with the light of reason.

While I hope that those who create Islamophobic rhetoric will consider my words, I realize the chance is slim. Those who propagate anti-Muslim propaganda feed off of the murderous distortions of Islam that terrorist organizations like ISIS and Boko Haram actively promote. It’s a vicious cycle.

My aim, therefore, is to open the minds of those who question this rhetoric. As Friar Michael Calabria, director of the Center for Arab and Islamic Studies at St. Bonaventure University in Western New York, notes: “Americans are being exposed to Islamophobic messages all the time.” Hence, it is vitally important to understand that Islam, like all of the world’s wisdom traditions, can reflect both the best and the worst of human nature. However divinely inspired a text maybe, scriptures pass through the subjective and interpretive human medium wrenching open the very real possibility that words will be used to both uplift and oppress.

The good in our hearts

I wore hijab on my 42nd birthday.

It was a simple act of solidarity and I was ready to explain it as such should anyone inquire.

Along with my husband, son, and visiting friends, I enjoyed my birthday celebration with a walk through a nearby Japanese garden. The fact that not too long ago, the Japanese American community was vilified and forcibly interned was not lost on me.

People were polite, even kind. Only once during lunch did a man at a nearby table find it hard not to stare. My husband addressed him respectfully, “Can I help you with something, sir?” The man shifted his gaze.

I often began my Middle East Case Studies classes by asking students to read selections from Maalouf’s book “In the Name of Identity: Violence and the Need to Belong.” In this text, Maalouf argues that a tribal vision of identity creates a “distortion” in both our understanding of self and other. This distortion makes it seem that only one component of a person’s identity matters. For example, the totality of a person’s complexity is suddenly reduced to one, often hated, affiliation: “He is a Jew,” “She is an Arab,” “They are Muslim,” etc. Maalouf argues that no “particular affiliation ... predisposes anyone to murder” but rather it is the tribal vision of identity that transforms “men of all countries, of all conditions and faiths” into “butchers.” He calls for a new vision of identity, one that is “needed urgently.”

I strive to behold the complexity of each individual’s identity. What do I see when I look at a woman wearing hijab? What did people see when they looked at me?

The New York Times recently featured Muslim American New Yorkers in a moving piece entitled, “Do you know me? Do you know my heart?” Bahaa Ellaithy, a high school math teacher in Brooklyn, poses these provocative and beautiful questions. When he is on the subway train, Ellaithy describes how “people don’t want to sit” by him. “It’s easier for those who look American,” he notes.

But what does an American look like? Did I look less American walking through the Japanese gardens?

As we answer these questions, may we embody the community ethos of those who placed menorahs in their Billings, Montana, home windows 22 years ago. It is time to decisively reject the politics of hate, rooted in a tribal and narrow vision of identity. It is time to be guided by the courageous good in our hearts.