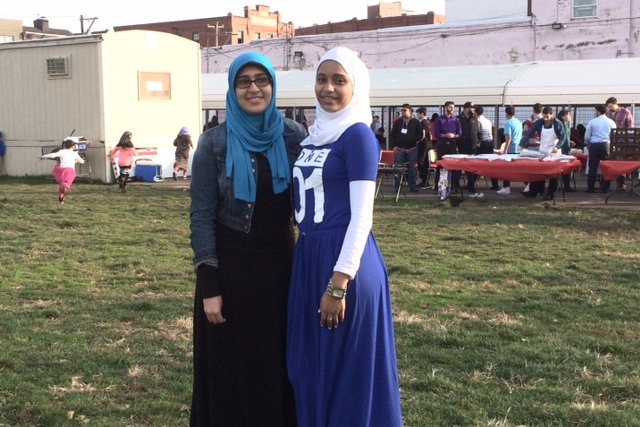 Nada Mustama and Chaimaa Harfouf, teens who worship at a South Kensington mosque that was desecrated by someone who lobbed a pig's head at the entrance, were unsettled by the incident but felt comforted by an outpouring of support from the community.

Three teens of diverse backgrounds who share a religion and place of worship were stunned to see someone desecrate the Al-Aqsa Islamic Society in the dark of night.

Through social media, they saw a hateful person lob a severed pig’s head out of a truck’s window at the entryway to their place of worship in South Kensington over and over, again and again.

Swine are considered unclean animals in the Islamic faith tradition, much like traditional Jewish food guidelines. But then of course Islam, Judaism and Christianity all spring from shared antecedents.

“Disturbing,” said Chaimaa Harfour, 16, who lives in the Northeast, but whose family hails originally from Morocco.

“We’re all humans. But people don’t care about facts. But then I’m used to hearing ‘Go back to your country. You’re a terrorist,’” said Harfour, a taunt she heard long before attacks in Paris and California by Muslim extremists that likely led to the incident, captured on surveillance footage, that is being investigated as a hate crime.

“How can people look at everyone in a religion in the same way?” she asked.

Nada Mustama, 16, of South Kensington, felt baffled that anyone would attack a place where she “comes to worship God and show respect and love for other people. It’s upsetting for someone to judge just on religion.”

The three girls, American citizens all, were among hundreds who came together at Al-Aqsa Saturday afternoon to celebrate the warm and uplifting messages of support and outreach from the neighborhood and beyond in the aftermath of the incident.

Gihan’s father, Aladdin Elmasry, 55, said he was unfazed by the attack because such attacks are so commonplace.

“Each community gets it,” he said of prejudiced reactions and attacks.

“We have to live together,” he said.

He claimed “yellow media” – specifically naming Fox Broadcasting Company – is a big part of the problem.

“The ignorance of some people is part of the problem. But the response we’ve gotten since the pig head proves my true love and trust of the American people.

“This is how we became the strongest nation on the face of the earth. The negativity is not us,” he said.

“I’m excited the people came out and showed there is no place for hate in Philadelphia,” said Marwan Kreidie, one of the organizers of the community party.