Talking Tactics: Why are the Union conceding easy goals? 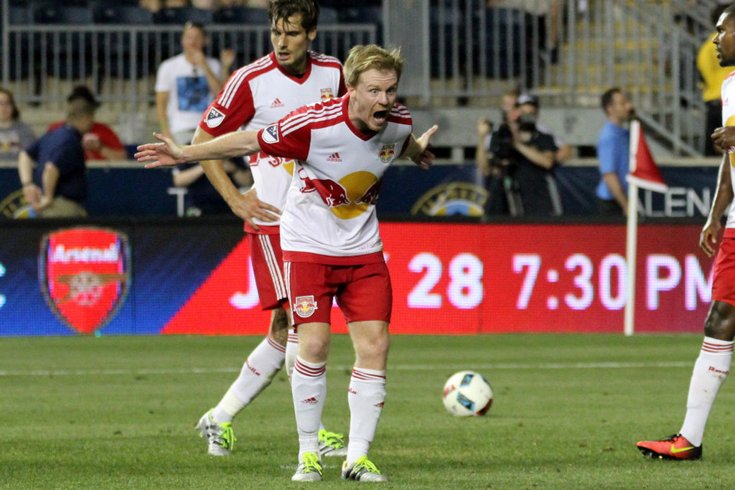 The 3-2 loss in New York (North Jersey) is out of sight and out of mind at this point, but I want to dive into that game one final time because of some great quotes that I didn't get around to last week.

Jim Curtin's candid nature provides us with some inside information from Philadelphia Union film sessions. One of those concepts from last week's loss was the idea of working hard to score goals, juxtaposed with the concession of preventable goals.

"The big thing we stressed in the film session was a recurring theme now, where you look at the goals we score, and you take Red Bull as an example, the goals we score, it takes 10 to 12 passes," Curtin said on Wednesday. "One was a very strong effort from Fabian Herbers outside the box to get a goal. The other one is eight to 10 passes, good buildup, a great ball by Fabinho, and a great header.

MORE: For the Union, it doesn't get any bigger than this weekend

"Conversely, I'm not taking anything away from the goals that Red Bull scored, but it's a short corner where we lose track of the best player on the field, which is I think preventable. Then also one ball from Dax (McCarty) in behind our backline and that leads to a goal. So, it takes so much for us to get a goal, and it takes the perfect play, and then you'll see us give up goals in silly ways. We're trying to rectify that. I think the group sees that. They're in agreement. We had good discussion in the film session."

It's true that both Union goals were multi-layered in the buildup.

The Herbers goal started wide, ended up at Fabinho's feet, then took a deflection after a nice layoff from Chris Pontius.

The second goal again started wide and came from a rather hopeful ball into the box.

By comparison, the New York goals were easier.

This is the short corner that Curtin was talking about, where Sacha Kljestan is ghosting across the box and finds himself unmarked for a clear shot attempt.

It starts with a ball played in to Dax McCarty, who recycles the ball back into the corner. 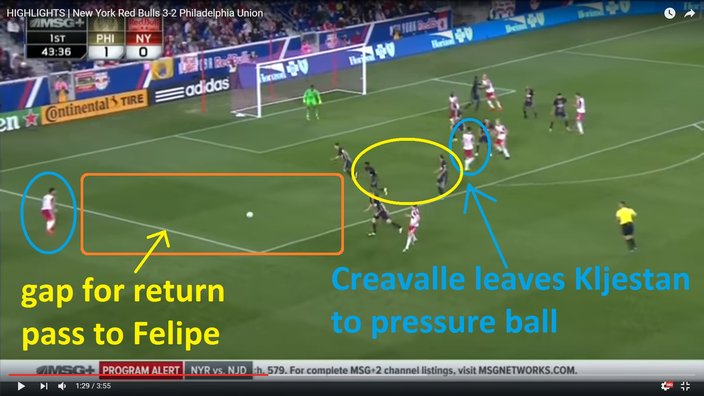 You basically see three players start to peel off here in order to get some pressure on Felipe. The ball comes in to Kljestan, who scores.

Here's what Curtin had to say about conceding this goal:

"Things we could have done better in the first one, Herbers coming out a little quicker to nullify the short corner. He stares at it and recognizes it, but still retreats back to the post, and his role is to get out there quick. It doesn't happen."

For the second goal, I want to reuse the graphic from the post-game grades and analysis column.

It's just a simple ball over the top, with Ken Tribbett and Richie Marquez beaten for pace by Bradley Wright-Phillips. 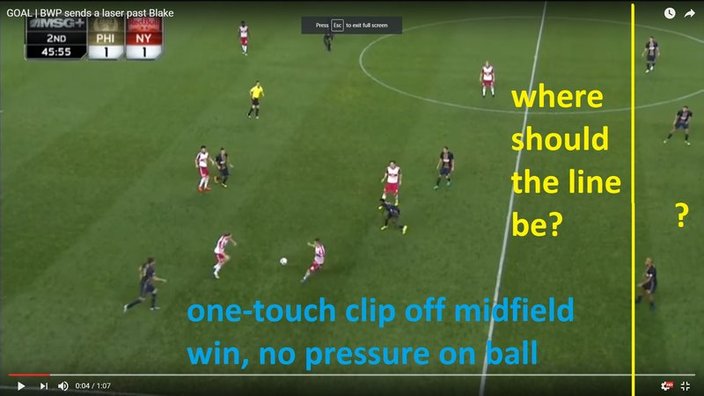 Without midfield pressure, McCarty can clip a ball over the defensive line, which looks a little staggered. I think Marquez is cheating a bit in anticipation of the pass, and that's why he's out of the picture.

Curtin kept it simple with this breakdown:

"The one straight ball by Dax, obviously it's a great finish by Wright-Phillips, but we give them a breakaway from midfield essentially, which is disappointing."

The game-winning goal may have been the most inexcusable out of all three goals, because it's just a mess up in set piece marking.

Here's a replay, where McCarty, one of the shortest players on the field, basically loses his marker on the dead ball.

This is what the play looked like when it started, with Felipe running over the ball. You've got Brian Carroll and C.J. Sapong handling Aurelien Collin and Dax McCarty, but the Union basically have some guys holding an offside line at the 18, and others who have sagged a bit deeper. 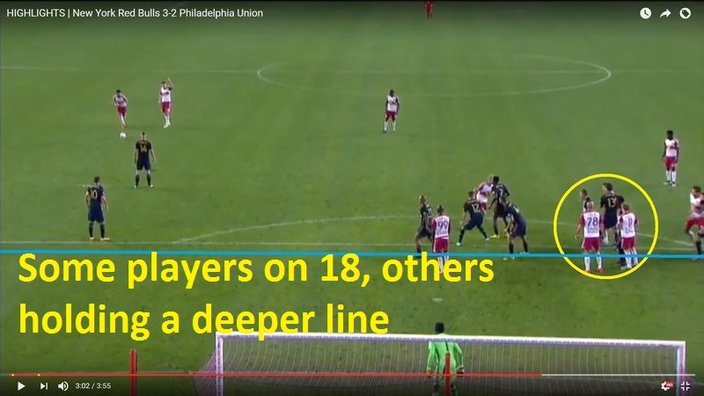 When Felipe starts his movement and runs past the ball, a few Union players sag a bit deeper and move the offside line a bit further.

Then, when Kljestan steps up, this is what the freeze frame looks like at the moment of contact. 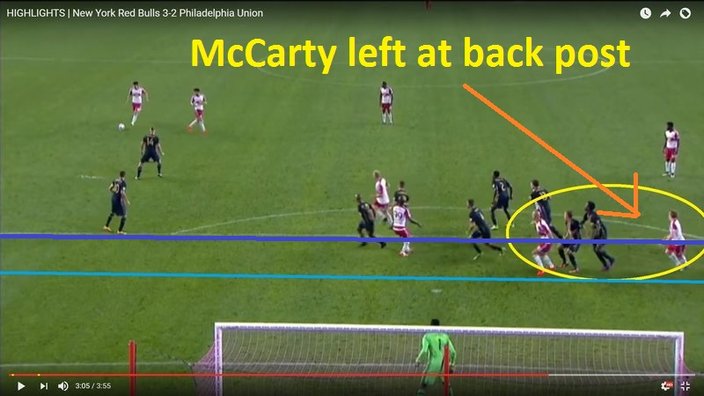 You can see that McCarty is left wide open on the back post. Carroll and Sapong both move with Collin.

Curtin spent the most time talking about this play:

Curtin: "Then, losing track of Dax, when you can see our line at the 18. There's a group that's set at the 18 and there's a group that's three yards behind, and that's inexcusable. That has to be together, and dropping and stepping together. Yea, there's traffic in there, but communicating and fighting through your picks is something we've discussed. I think we'll have some solutions, and again, I'm very optimistic and comfortable in knowing that our group will respond the right way at home."

PhillyVoice: Were C.J. and Brian just mixed up on that assignment?

Curtin: "No, they know who they had in the matchups. Brian had Dax. Before the injury, Alejandro had Dax. Dax is a guy who is good with his head, it's no secret, for a short guy especially. Brian got caught between, 'do I go tight and drop with him?' or 'do I hold the line?'. I think you almost saw him get picked then by our own guy, by C.J., and that's a thing where, when we see that, can Richie at the back post maybe solve it? Can C.J. just take the onus upon himself to leave Collin and attack the ball? There are a million different things but they are split second decisions and we came up a little bit short.

"Overall, we're much too deep by the time Felipe approaches the ball, stops, and that makes us drop an extra yard. By the time Sacha hits it, we don't give Andre (Blake) enough space to come and get it. Could he? And is he capable? For sure, because he's done it all year. By no means does it have anything to do with him at that point, but we had the space so tight that he had questions and he stayed. You respect that. A lot of things a lot of guys could have done better on that play."