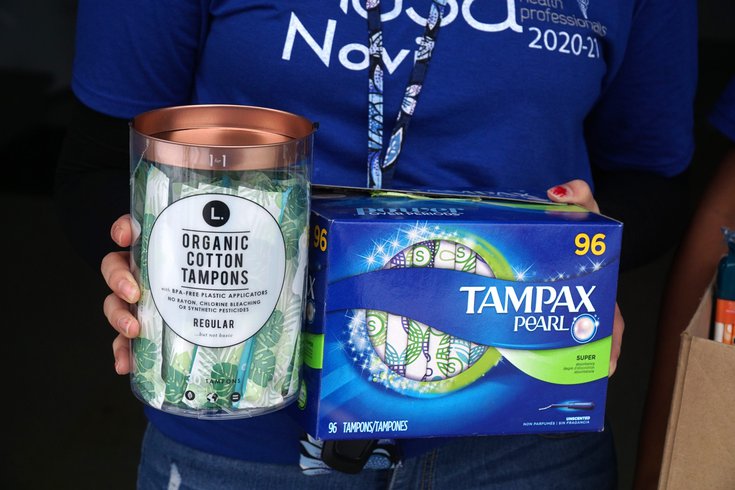 A national tampon shortage caused by supply chain issues has led to some consumers struggling to find period products. The shortage is exacerbating existing gaps in access to menstrual supplies, which many Americans already struggle to afford.

People scanning pharmacy and grocery store aisles in search of menstrual products may be coming up short due to a national tampon shortage caused by supply chain issues.

Hints of the shortage began popping up on social media earlier this year, with people sharing photos of empty store shelves and asking for help in accessing products. Nonprofits focused on menstrual equity also have started to see an influx in people seeking out items.

Lynette Medley, co-founder of The Spot, said the Germantown menstrual hub has seen a large influx of requests from residents looking for pads, tampons and other menstrual products as the shortage has hit stores across the Philadelphia region.

"We've seen a lot of requests for tampons and have given away 85% of our supply," Medley said "And it's not just tampons. It's all other period products as well. We're almost out of pads, too."

On Monday, spokespeople from Walgreens, CVS and Target told Axios that they were aware of a limited supply of tampons at some locations. Many suppliers have been unable to fulfill some of the regular orders placed by the stores, with companies pointing to supply chain issues as the probable cause of the delay.

Tampax producer Proctor & Gamble told The Washington Post that it is working with retailers to ensure that people who menstruate have access to the products they need, and stressed that the shortage is temporary. Though not every tampon brand is in short stock at this time, Proctor & Gamble is one of the largest manufacturers of tampons in the United States.

Period products, including tampons and sanitary pads, have become more expensive in recent months, as inflation continues to impact consumer spending on necessities. Data from NielsonIQ shows that the average price of a regular pack of pads increased by 8.3% from the beginning of the year through May 28. An average pack of tampons increased by 9.8%.

Though inflated costs of other products have led to shoppers cutting their spending, menstrual products are necessary to maintain hygiene and can not be cut back easily. Further, attempting to extend use of the disposable hygiene products can lead to increased risk of infection.

Dana Marlowe, founder of I Support The Girls, told NPR that her organization has received half as many tampon donations as they have in previous years and more than 60% fewer donations than in 2020. She noted that people who lack the resources to travel from store to store in search of products often resort to potentially risky alternatives.

Though some shoppers may be new to the struggle to find tampons and pads, gaps in access to menstrual hygiene products have persisted for years, both in the United States and around the world.

A 2021 study commissioned by U by Kotex found that 2 in 5 Americans experience period poverty, meaning that they experience difficulties in accessing and affording products like pads and tampons.

A large 2019 study in St. Louis found that about 67% of low-income women were unable to consistently afford menstrual supplies. There are 16.9 million people who menstruate currently living in poverty in the United States.

Lack of access to period products can have an additional economic or societal impact because it can cause people to miss work or school, particularly in places where those products are not provided.

"You know, if you can't afford housing or food or all of those other things, you cannot afford menstrual products because they are not covered by anything," Medley, of The Spot, said on an episode of Crooked Media's "American Dissected" podcast earlier this year.

Medley later said the pandemic hit communities in different ways, and she sees people of varying socioeconomic statuses come in seeking products because they are often not provided through other safety nets.

In Philadelphia, people struggling with period poverty often utilize The Spot and No More Secrets Mind Body Spirit, another effort co-founded by Medley and Nya McGlone, to bridge the gap in access.

The Spot, is the only organization of its kind in Philadelphia, Medley told PhillyVoice. Despite the tampon shortage, it is continuing to host traveling menstrual product giveaways. On Monday, Medley and McGlone brought their Mobile Menstrual Health Unit to West Philadelphia Preparatory High School for a community event.

Medley and McGlone founded The Spot in 2021 as a "menstrual hub," traveling from their headquarters in Germantown to communities throughout Philadelphia and the surrounding region. The Spot provides education, menstrual care and products to those who may otherwise not be able to afford them.

"I think the difference in our approach is that we provide dignity to our communities," Medley told the Inquirer in February. "We do not give them pity because in my mind we should not have to do this work. I cry because I can't believe this is something they have to ask for, to beg for — a pad or a tampon."

While those with disposable income are encouraged to purchase longer-lasting, reusable menstrual products like period underwear or menstrual cups, which can last up to six months with regular cleaning and disinfecting, those who lack access to other necessities like water service or operational toilets may not have many other options.