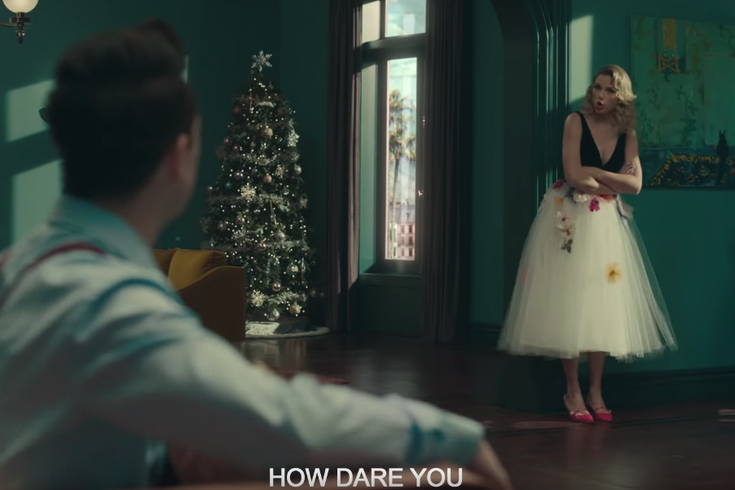 Taylor Swift released a music video late Thursday night for her new single, "ME!" In the video, we see a brief reference to her childhood in Berks County.

After weeks of teasing her fans, Taylor Swift finally dropped the music video for her newest single, “ME!," featuring Brendon Urie (Panic! At the Disco) late Thursday night.

The video stars Swift in a bubbly pastel world of metamorphosis. Through this world we see glimpses of her past - including a reference to her childhood growing up on a Christmas tree farm in Wyomissing, Pa.

Early in the video we see a shot of Urie and Swift fighting like a married couple in French (??) while in the background we see a decorated Christmas tree. The reference is relatively brief and may even seem somewhat coincidental, but given the amount of references to her past in the video, it would be odd if this wasn't something a bit more.

The entire video takes place inside what appears to be a chrysalis. This idea of growing from her past is littered throughout the shots, which we first see with a pastel snake, a motif we commonly saw on her last album, "Reputation." Before it can slither away, it explodes into a thousand little butterflies.

There are some obvious hints to her country roots. There's a shot of her dancing in cowboy boots, and there's a not-so-subtle reference to the Dixie Chicks. She sings, "You're the kind of guy all the ladies want - and there's a lot of cool chicks out there," to which the camera pans to a wall filled with paintings of literal chicks. Though, smushed in the middle is a painting of The Dixie Chicks. (Swift brought out Natalie Maines from The Dixie Chicks on her "1989" tour for a duet on "Goodbye Earl.")

There's a reference to her video for "Look at What You Made Me Do" when Urie proposes to her. Her cats Olivia and Meredith also make an appearance and are lovingly referred to as Urie's and Swift's "daughters." And if you need more reason to watch the video, there’s a whole slew of dancing sequences with '60s and '70s references throughout.