Students on the campus of Temple University.

Common Grounds, the recently-opened coffee shop on Temple University’s campus that caught flak for hanging a neon sign referencing the prescription stimulant Adderall, has decided to change the sign after negative feedback from the community.

The shop told PhillyVoice on Wednesday the plan is to put up a new sign reading "Up All Night On Coffee" or temporarily put a line through the word"Adderall," and add the word "coffee" to the sign.

The Temple News’ Kelly Brennan first wrote about the coffee shop's owners' plans to change the sign in an opinion piece published Tuesday.

Common Grounds, which opened for business at 16th Street and Cecil B. Moore Avenue on Sept. 19, is helmed by 2005 Temple grad Shawn Bullard and 2002 Penn State grad Stephen Yaeger.

The shop had told PhillyVoice over the weekend the sign was not meant to encourage or promote drug use. Adderall – a prescription amphetamine with effects similar to cocaine that is used to treat ADHD – is often found on college campuses and has a history of being used, and abused, for non-prescribed purposes: staying up late to study, or to party.

The Temple News also reported that the employee who used to run the shop’s Instagram page was fired. The shop’s Instagram account had spent part of last week responding to critics of the sign in a post that prominently featured it, but was deleted Wednesday afternoon. 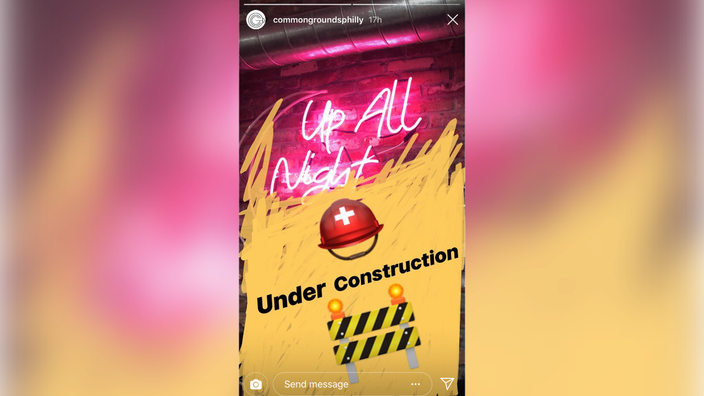 Common Grounds coffee shop on Temple University's campus posted this Instagram story to its account on Wednesday. It shows a portion of a neon sign displayed inside the shop, that reads, 'Up All Night on Adderall.“ Common Grounds' owners have promised to remove the sign or change.

The post had been embedded in PhillyVoice’s story about Common Grounds' Adderall sign last week. The shop's most inflammatory comments seem to have since been deleted, though a few remain.

The sign has a number of detractors. In addition to the professor and student quoted in last week’s story, multiple Temple students contacted PhillyVoice to express their distaste for the sign since the original story about it was published on Oct. 16.

Adderall is a potentially addictive medication, and according to The National Center for Health Research, the frequency of Adderall abuse fluctuates between schools and can be as low as 1 in 12 across a student body, or as high as 1 in 3 students.

The center says Adderall users are more susceptible to extreme risks like hallucinations, cardiac arrest, or even death among people with heart conditions when they use the drug without a prescription or at higher-than-recommended dosages.