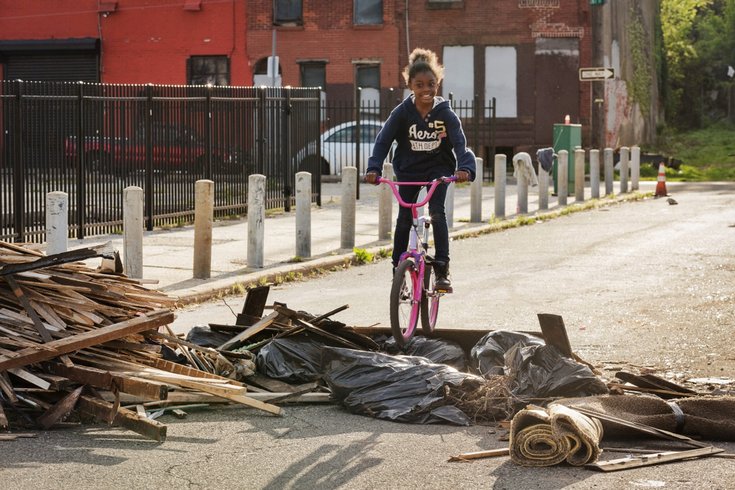 Mikayla, a young girl David Suender encountered in North Philadelphia, rides her bike over a trash pile. "This little girl really showed the boys how it was done on a bike," Suender said. "She was one of the more fearless kids we met that day, pedaling full speed at the jump over and over again."

After flying through the air over a ramp propped up by trash, Mikayla enthusiastically looked up at BMX rider and documentarian David "Joby" Suender and smiled.

"Could you come back and teach us more tomorrow?" she asked.

How could he not?

Inspired by his many interactions with kids like Mikayla, Temple University graduate Suender and his co-founder Steve Tassone are transforming their everyday experiences into something meaningful.

"Riding out in various communities in Philadelphia, kids who are already passionate about riding bikes see us and constantly ask us to come back and show them how to ride," Suender told PhillyVoice. "These are kids in economically depressed and disadvantaged neighborhoods who obviously don’t have community resources, but all they need is something to feel passionate about -- someone to teach them about bikes in an organized environment."

And that's exactly what he plans to do.

This morning, the duo launched an Indiegogo project that hopes to raise $10,000 to create the Urban Youth BMX BikeLife Program, in partnership with One Day at a Time and the Urban Affairs Coalition. Suender and Tassone first came up with the idea to create a sort of "summer camp" for at-risk kids while working together on a project in a social entrepreneurship class at Temple. After they graduated last year and continued to ride through North Philadelphia communities, they realized it was something they actually wanted to pursue.

Free of charge to participants, Suender said it would function as a means to engage at-risk youth who would otherwise be exposed to violent and drug-related crimes. The violence-reduction element comes into play, he said, by offering incentives through the program in partnership with Philadelphia schools: Good grades and positive performance within the program result in prizes like T-shirts, DVDs and, potentially their own BMX bike. 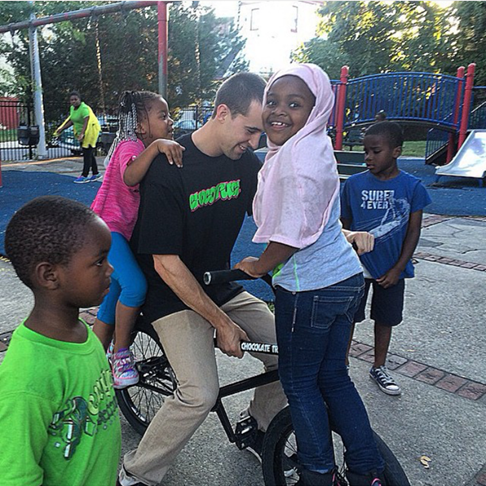 His ultimate goal is to team up with as many schools as possible.

"I really want to try and partner with the School District of Philadelphia or charter schools to see if this is something they’d be interested in working into their curriculum as an after-school activity," he said. “I just want to get as many kids on bikes and way from street violence and guns that rule their lives -- to try and get them interested in something a little more wholesome that might be able to take them somewhere."

His program will initially target kids between the ages of 7 and 14 in North Philadelphia, he said. Seven-year-olds, of course, would be limited to learning basics, and Suender insists it's nothing parents should be fearful about -- "It's no different than sending kids to play tackle football," he said.

The $10,000 he's asking for would be used to purchase about 25 to 30 BMX bikes as well as equipment, such as transportable ramps. As a BMX rider and documentarian, he'll be teaching the program with the help of friends he's made along the way as a rider.

Philadelphia, he added, is an urban landscape that lends itself to the sport. Biking, he said, is inexpensive and offers an opportunity to explore outside the boundaries of their community. Many kids he interacts with, he said, seldom leave their blocks.

"You can explore a built environment that's right in front of you, and you don't need a lot of money to do it," he explained. "Kids don't have to pay $15 to get into an indoor park [like they would in the suburbs]."

Suender will host a "BMX jam" demonstration for interested youth on Aug. 28 at 20th and Lehigh streets. As part of that event, he hopes to convince parents of BMX's potential as a skillset-building and communal activity for their kids. Ideally, he said, he'd like to raise enough money in the next few weeks to start the program alongside the new school year in September.

Their Indiegogo crowdfunding campaign can be found here.