The guy many wish would run for public office in Philadelphia

Omar Woodard, 32 and patient, is biding his time 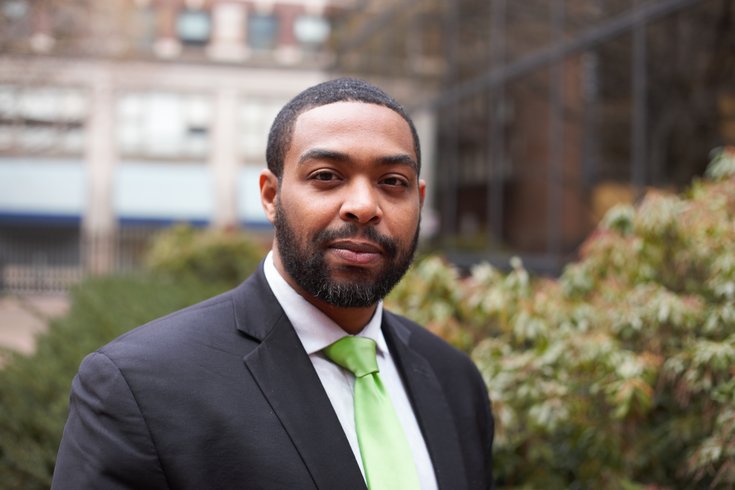 At 32, Omar Woodard's goal is to end deep poverty in his own neighborhood – North Philadelphia. And while he is mum on his political ambitions, "there is literally unlimited potential to what he may end up doing,” says Brad Bauman, a Democratic political consultant.

He isn’t going to be famous in pop culture.

He doesn't head up one of Philadelphia’s major institutions.

And he isn’t running for office, not right now anyway.

Woodard is, however, the exact kind of person who embittered commentators and civic activists are always wishing would be elected to something in Philly. The city’s politics are maligned for many things. The list of indicted and imprisoned politicos is too lengthy to name. Officeholders keep their seats for decades, regardless of their ability to craft policy. Incompetence is rarely punished, while incumbency is rewarded above all things. It’s hard for a neophyte to break into the political class, although it helps if you come from a long-established political family.

Woodard is the executive director of the Philadelphia branch of the GreenLight Fund, a non-profit venture capital firm that invests in evidence-based social innovations focused on ending poverty. Just 32, he has already worked as a Washington, D.C. lobbyist, toiled at a high-flying private sector firm, served on the boards of numerous influential institutions, worked for the Obama campaign, and plowed the field of venture philanthropy. Although well-connected in Washington, he chose to return to Philadelphia and stumbled into a job as policy director for state Senator Anthony Williams mere months before the 2015 mayoral race.

In short, he’s someone to watch.

“You talk about people who are in this public space for the right reason, he’s one of them,” said Adam Bonin, a prominent political lawyer in the city. “He’s not an operative who is dabbling in policy. He cares about finding the right answer. He’s a policy guy.”

Woodard is a son of North Philadelphia, but he wasn’t born there. His earliest years were spent in Norristown, Montgomery County, where his mother moved to escape from her neighborhood. His father was incarcerated at the time.

Woodard’s mother brought him back to North Philly when he was five, after their Norristown apartment building burned down. But she didn’t have faith in the School District of Philadelphia. Instead she got him into Girard College, a private boarding school for low-income children overseen by the city.

“I quickly found that Omar was not just one of the brightest young minds in the Democratic Party but that he had the ethics and the heart to match.” – Brad Bauman, Democratic political consultant

Then Woodard’s father returned from prison. He quickly got into trouble again and, one day as the now-six-year-old rode in the car with his parents, they were stopped by police in 1990. His father had outstanding warrants and both adults in the car were arrested. Philadelphia police drove Woodard to the King of Prussia mall, where he had an aunt who worked at Bloomingdales. His mother didn’t get out of prison until 1994, his father in 1997.

“I was disconnected from the regular experience a child would have,” said Woodard. “Coming home, parents helping with homework, food on the table. That wasn’t my life, that wasn’t my experience. I grew up in a boarding school. Breakfast, lunch, dinner all eaten together, same kids every year. Girard College gave me the structure I needed when my family was...when I didn’t have a family.”

Woodard’s mother got out when he was in middle school. In prison she converted to Islam and he did the same, quickly becoming fluent in Arabic. He memorized huge sections of the Koran, and began leading prayers at local mosques — his first experience in front of a crowd. (By the end of high school, Woodard became fluent in French as well.)

In college at The George Washington University, on a scholarship that covered 90 percent of his tuition, Woodard rose from president of the black student union to president of the student senate to student body president, a position that came with a 100-person staff and a $1 million budget.

After becoming student body president, he faxed a letter to state Senator Shirley Kitchen — his representative back home — and asked for her advice. She put him in touch with Chaka Fattah, who promptly took a liking to Woodard and hired him as an urban policy aide. In practice that meant both real responsibilities – conducting research on housing and education policy– and grunt work, like getting coffee and making copies.

After that he jumped from the Whitaker Group, a lobbying firm that works with African nations, to leading the Obama campaign effort in Chester County in 2008 – which went to the Democrats for the first time since 1964.

That victory brought accolades but not a job in the Office of Legislative Affairs as he had fervently hoped, because Obama promised to not hire lobbyists. Nonetheless, he’d made an impression.

"Then GreenLight came along, which meant money on the table to actually invest in trying to address these issues [of deep poverty]. It was a no-brainer.” – Omar Woodard, on why he decided not to run for state senate

“I quickly found that Omar was not just one of the brightest young minds in the Democratic Party but that he had the ethics and the heart to match,” said Brad Bauman, a Democratic political consultant and former director of the Congressional Progressive Caucus, who met Woodard at that time. “There are few people I have known in the past 15 years who really qualify to be called the real deal the way that Omar does. There is literally unlimited potential to what he may end up doing.”

Woodard went to the private sector and traversed the country with the blandly titled Advisory Board Company and becoming, in his words, “the black Ryan Bingham” (a reference to the George Clooney character in "Up In The Air," the movie about a constantly traveling businessman). But he decided the work was soulless and worked for more than three years with Venture Philanthropy Partners in Washington — very similar work to the GreenLight Fund.

“Around then I knew I wanted to come back to Philly,” Woodard said. He started spending his weekends back home. When he left VPP, he moved back with “no job but a nice severance package. Two months later I get a call from a former Obama guy about a state senator here who’s looking for a policy director. I did not know he was running for mayor.”

Woodard received his education in Philadelphia politics during the 2015 election. He was policy director for Williams’ ill-fated effort, too. Despite the campaign’s poor performance, he raised his own profile as well as that of his candidate. He acted as a surrogate for Williams at numerous forums when the candidate was unable to attend. There he impressed general audiences and political players alike with his easy manner before a crowd and his obvious grasp of the issues, ranging from Vision Zero to his ultimate motivation: ending deep poverty in Philadelphia.

“The first time I met him was at the bicycle coalition’s mobility forum [Woodard was standing in for Williams] and I thought he did an extraordinary job,” said Mustafa Rashed, president and CEO of Bellevue Strategies, a political consulting firm, and campaign manager for 2015 mayoral candidate Doug Oliver. “A couple other times as the campaign got busier we both subbed in as surrogates. I could see early the seed being planted in his head, 'Hey, I could do this.' He got the bug.”

Soon after the primary Woodard quit his work with Williams and began exploring a run in the Third Senatorial District, which comprises much of North Philadelphia. His old pen pal Shirley Kitchen officially announced her retirement in December 2015, but those in the know were aware of the move for months prior. Everyone also knew that she wanted Sharif Street, son of the former mayor, to take over for her.

Street's bid was endorsed by the Democratic Party City Committee, Kitchen and Williams. Nonetheless, Woodard raised and pledged more than $100,000 for his campaign at the end of 2015, an impressive amount for a nascent politician with few party ties. 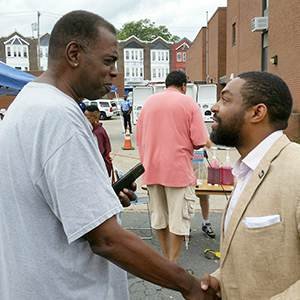 “I was running against the Democratic Party,” said Woodard, describing what his campaign strategy would have been. “Running as a Democrat against the Democratic machine. I didn’t expect or anticipate or ask for Senator Williams endorsement…The original message was 'I’m you.' I’m from the community. I wasn’t the son of a mayor. I wasn’t the son of a senator. I was the son of two formerly incarcerated people from North Philly.”

In the end, however, he decided against running and took the position with the GreenLight Fund instead. He said Street “is a friend” who shares the same mission.

“I looked at my goal of ending deep poverty in North Philadelphia and then I looked at the fact that Harrisburg couldn’t even pass a budget,” Woodard said. “We’re not talking about struggling with deep multi-generational intractable issues. We’re just talking about a budget and they couldn’t get that done. I’m wondering how I would feel confident of being able to deliver anything.

"Then GreenLight came along, which meant money on the table to actually invest in trying to address these issues," he continued. "It was a no-brainer.”

Woodard is investing the millions of dollars the GreenLight Fund has put at his disposal in organizations working to address the needs of many North Philadelphians – bringing formerly incarcerated people back into the mainstream economy, helping low-income children receive proper care and ensuring that those who are eligible have access to proper public assistance programs.

Woodard said that he is not gaming out which political offices he might seek in the future, or whether he will consider running again at all. But there are rumors of seats on Philadelphia City Council that may open up in a couple years, both at-large and in-district. And the state Democratic Party is banking on the new district lines in 2022 to make Harrisburg more friendly to their agenda.

Street’s presence in Philly politics may always be a challenge for Woodard, in that he is a politician of comparable age and constituency who could well angle for a council seat in the future. But there are scenarios where that wouldn’t be a factor, too. If, for example, what if Street moved to council in 2019 and Woodard moved to the state senate—just ahead of the remapping.

The future is as unknowable in politics as in anything else, and Woodard waves aside such speculation. In his telling, he looks forward to working with Street and anyone else who is willing to fight for North Philadelphia.

“Omar understands that the right set of circumstances to hold elected office are going to present themselves to him,” Bauman said. “There are numerous ways in which he can serve his community without being an elected official until the time is right. And when the time is right, he will be an unstoppable force when it happens.”