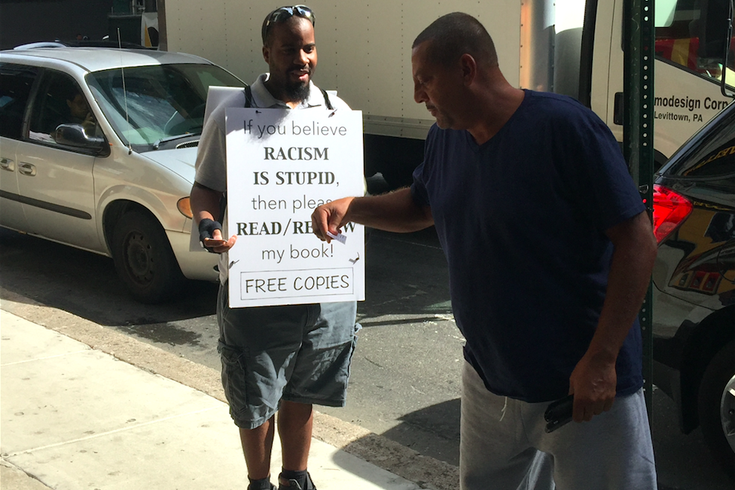 Anthony Coleman wrote a book called 'From Black to Human: The Journal Entries from a Conscious Black Man' and spends time at 15th and Chestnut streets handing out business cards so potential readers can get a copy emailed to them.

Even though it happened eight or nine years ago, Anthony Coleman remembers the moment as if it were yesterday.

He was in a car with high school friends when the Coldplay song “Viva la Vida” came on. As human beings are wont to do when they hear songs they like, he started passionately singing along.

“Anthony, hold on,” he recalled of one friend’s reaction. “You’re not supposed to like this song.”

“What the hell does that mean?” he thought to himself.

It was a rhetorical query. He figured he already knew the answer.

Coleman is black, his friends were white, and narrow-minded thinking held that people of his race aren’t supposed to like Coldplay when rap music is more their forte.

While the exchange prompted zero confrontation, it informed Coleman’s personal examination of race – both in his life and across the country.

It also led, years later, to him compiling race-related journal entries, quotes and other passages into a book titled “From Black to Human: The Journal Entries from a Conscious Black Man.”

Granted, the book wasn’t widely printed. In fact, he gave the 30th – and last – copy away this week.

In recent months, though, the 25-year-old from Ardmore has spent a few hours each Tuesday and Thursday standing at 15th and Chestnut street in Center City, where he’s worn a thought-provoking sandwich board that reads, in part, “Racism is stupid.”

There, he’s handed out business cards designed to draw attention to his book.

“My name is Anthony and I’ve discovered my humanity from ‘being black’ in America!” the cards read. “For a free PDF copy of my book, email me at arc2k5@aim.com.”

"I fear that ‘BLM’ is diverting our attention away from the real issues because it’s easier and preferable to blame others for our problems than to blame ourselves!" – Anthony Coleman

Two weeks back, I took one of those cards from Coleman. On Tuesday morning, after I’d had time to read his book, we sat down for an interview in Dilworth Park.

He expanded on a mindset that seems exceptionally rare in this era of people screaming their views instead of taking time to hear one another out.

It’s worth taking a look at a few passages before delving into the conversation.

It was funny because I was also called the “whitest black kid” in school since I didn't do what other black kids did. I didn't steal, start fights, or curse out teachers and was it because I wanted to be white? Or was it just common sense to be on your best behavior?

Did you know that there was a time where I actually wanted to be white? Can you believe that? I honestly thought that being black was wrong and that being white was right!

• Why do so many black men engage in crime so frequently?

• Why do so many black children grow up without a father?

• Why do so many black women believe they need to wear weaves to feel beautiful?

• Why is the ‘nigga mentality’ normalized within the black community?

I agree that we should bring awareness to the unfair treatment that black people receive by racist cops, but are racist cops solely responsible for every problem that black people face? Hell no! I fear that ‘BLM’ is diverting our attention away from the real issues. … Because it’s easier (And preferable) to blame others for our problems than to blame ourselves! If we blame ourselves, then we acknowledge that we are responsible for solving our own problems, which is very uncomfortable. Black people are possessed by the victim mentality!

Coleman knows these entries may not appeal to everybody, and some measure of pushback he’s received from passersby served to confirm it. Still, it’s his reality and if it sparks conversation, that’s the ultimate goal.

The impetus came from that “whitest black kid” label he heard while being raised by a single mother, and his time at Harriton High School in Lower Merion Township.

“I took that as a compliment back in the day,” he said. “But as I got older, I realized that’s disrespectful.”

He said he heard the “well-spoken” labels that left people assuming he was a 4.0 GPA student when in fact, he estimates his academic record clocked in at a 1.8 because “school wasn’t something that I really wanted to do.”

He said his motivation was never getting an education so he could make money later in life, though he spent time in an “invention phase” that led Coleman and his grandmother to bandy about ideas like trashcans that already had trash bags inside them.

Seeking his purpose, he found God, who he views as a figure that created humans “for the purpose of love.”

Through that lens, he realized that “racism doesn’t make sense. Love and racism cannot coexist.”

Still, people – both white and black – are “indoctrinated by society” to see inherent differences along racial lines.

There’s enough blame to go around: Whites are born onto one track while he said some blacks use those hurdles as an excuse to revert to a “ghetto mentality” instead of working to make their situations better, he said.

Coleman rued the mindset which holds white people should be ashamed of their privilege – “Just because you’re white doesn’t mean you have to feel guilty” – a stance that most assuredly draws blowback from black peers.

To that, he said, “Why aren’t you demonizing the ghetto mentality? We all have the ability to love, do treat others right. It’s a choice.”

“It hurts to know black people have gone through such horrible things in the past. That reality hurts. I understand that pain,” he said. “Saying the white man is the devil isn’t the answer. We can’t allow ourselves to not get past that history, to dwell on that history.

“Setting that aside is how you get to unity, forgiveness and respect. Where you were born in society does not have to define who you are, and you shouldn’t allow people to define you because of it.”

He said that he’s gotten a moderate level of feedback from people who’ve taken his card – he estimated that he’s handed out 250 cards two days a week for the past six months – and emailed to get a copy of the book.

That includes family members who haven’t been too happy with his depiction of a challenging upbringing. Namely, he doesn’t like how they use the fact that other families face similar challenges as a crutch to justify their personal business as usual.

“That normalizes it,” he said.

He’s been called "an a******" when his sign made reference to Black Lives Matter by a woman who thought he was a member of that group.

He’s also spoken to white men who said they’re trying to work through the racism inherent in their upbringings.

Coleman doesn't seem all that flustered by the negative reaction. All he hopes is that people engage in the conversations he’s trying to spark.

“Sell out. That’s an insult I’ve gotten before," he said. "Black people embrace this divide.

"People told me they sensed a lot of anger in the book. I prefer to call it passion. This is not how things are supposed to be.”