Thousands chip in for annual MLK Day of Service in Philadelphia

Martin Luther King Jr. "was fighting for justice 365 days a year," said Todd Bernstein. "Today is a day where we can embrace that legacy." 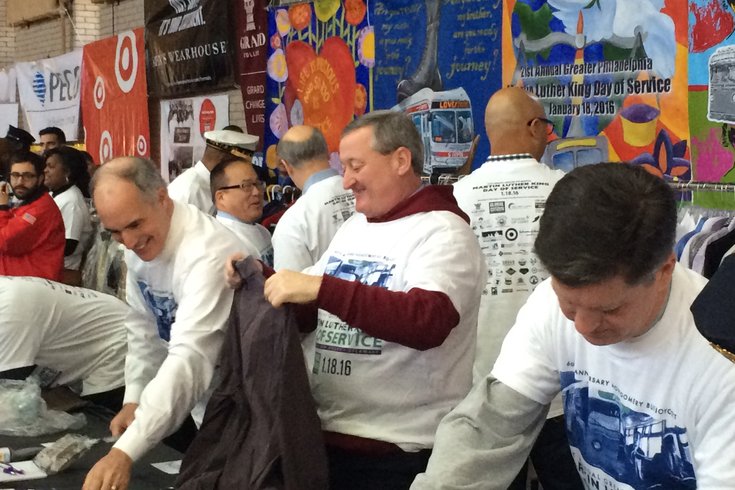 Mayor Jim Kenney shares a laugh with Sen. Bob Casey as the politicians chip in to help sort clothes for the needy during Monday's MLK Day of Service gathering at Girard College.

Thousands of volunteers from throughout the city braved a blistering cold Monday morning in order to gather at the Cheesman A. Herrick Fieldhouse and Armory at Girard College in Fairmount, all in the name of service.

Monday's event celebrated the life of Martin Luther King – who would have been 87 on Friday – and the community work that King had performed throughout his life.

At Girard College, Todd Bernstein, president of Global Citizen and founder/director of the Greater Philadelphia MLK Day of Service, estimated about 5,000 volunteers were participating in more than 150 service projects on the school's campus in North Philadelphia. Other service projects were being performed around the city to mark the day.

"He (Martin Luther King Jr.) was fighting for justice 365 days a year," said Bernstein. "Today is a day where we can embrace that legacy." 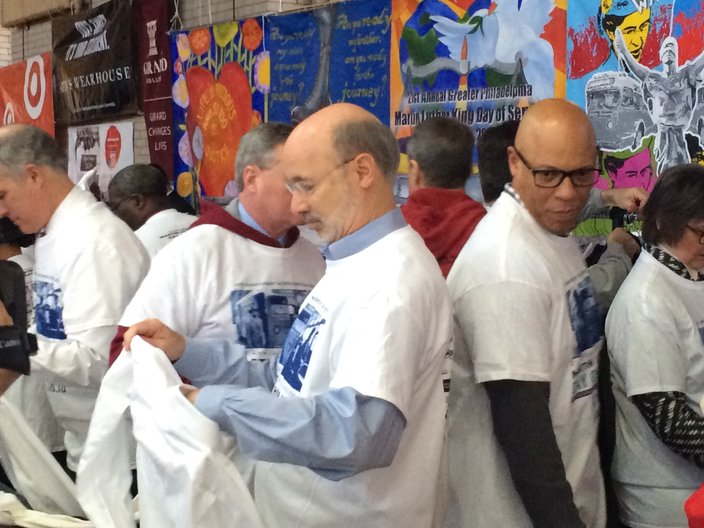 Pennsylvania Governor Tom Wolf, during the MLK Day of Service at Girard College, inspects clothes that will be donated to needy Philadelphians.

As volunteers huddled into the large auditorium building at Girard College, thousands filled the space, toiling on service projects presented by city community groups and charitable organization. Children painted murals and birdhouses while adults taught board games and double-dutch.

As he folded and sorted used sweatshirts and jackets, Kenney said he was happy to help out the community during the day, saying that kindness, even small acts, reverberates throughout the community and can have a long-reaching, positive impact.

"Your impact on people's lives just keeps going on," he said. "It's like a ripple." 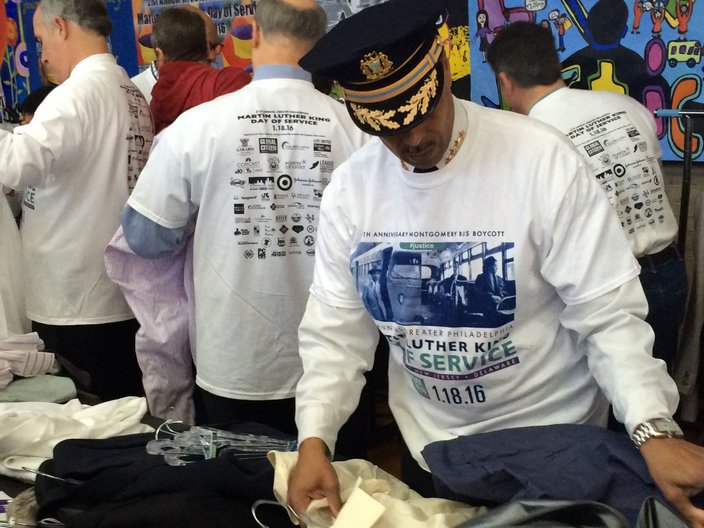 Philadelphia Police Commissioner Richard Ross inspects clothing that will be donated to needy Philadelphians during this year's MLK Day of Service at Girard College.

The freshman mayor said that he wanted to help celebrate King's legacy in the Day of Service and said that it is important that Philadelphia citizens gather together to help strengthen the community.

The city's new police commissioner said that he too supported the Day of Service because of the positive impact that the service projects started Monday would have on the community throughout the coming year.

"Today is very special to a lot of people," said Commissioner Ross. "And, hopefully, we can channel this and it will help improve our community relations throughout the year." 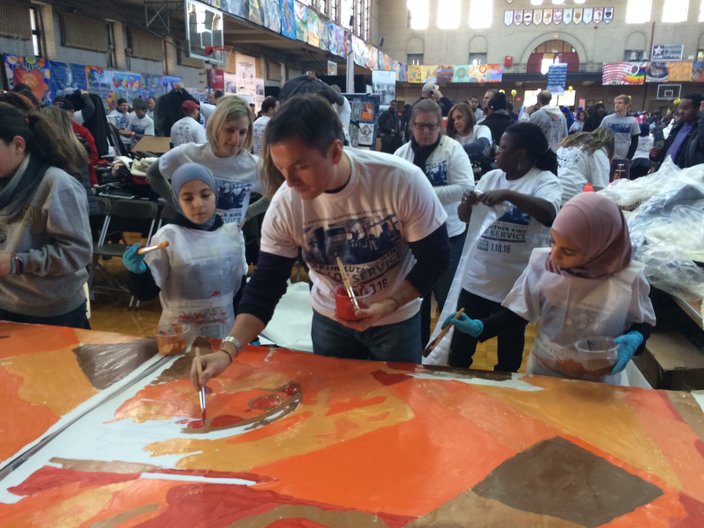 Kevin Valencia, of Philadelphia, joins two students from the Al-Aqsa Islamic Academy, Juenan Ali and Nazeeha Salameh, both nine-years-old, as they paint a mural of Richard Allen.

In fact, Amneh Ahmad, of the Arab American Development Corporation – located at the Al-Aqsa Islamic Society on Germantown Avennue, which was targeted by anti-Islamic vandalism in December – said that she brought a group of 40 young students to help show them the importance of working to support the community in which you live.

"We have to teach, at an early age, that you have to help each other," Ahmad said.

Students from the school spent the morning painting a mural of Richard Allen, who founded the African Methodist Episcopal Church and lived in Philadelphia in the 1800s. 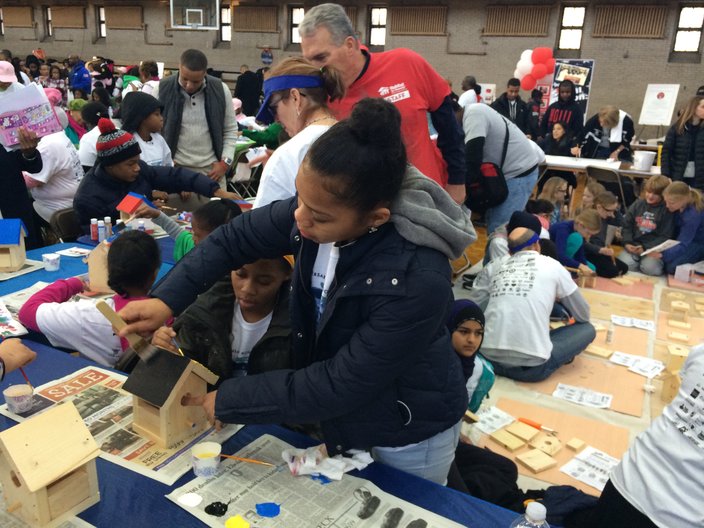 Unity Poller, 15, of North Philly, helps to paint a birdhouse for Habitat for Humanity.

Across the auditorium, volunteers painted something different – birdhouses – as welcoming gifts for individuals involved in Habitat for Humanity projects.

It's really a good way to help the community," said Unity Poller, 15, of North Philly, who painted a birdhouse as part of the city's Fire Explorer program, a youth program hosted by the Philadelphia Fire Department.

"It's a good way to give back and I like helping," she said.