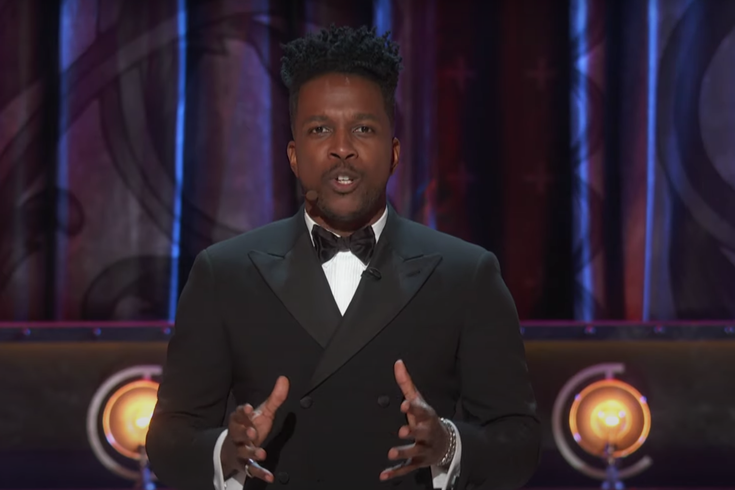 The curtain rose on Broadway on Sunday night as the 74th annual Tony Awards was finally held after an indefinite hiatus caused by the coronavirus pandemic.

One of the night's biggest stars was Leslie Odom Jr., who hosted "The Tony Awards Present: Broadway's Back!" at the Winter Garden Theatre in New York City.

The live music event, which took place following the main awards ceremony, celebrated the much-anticipated return of Broadway. The COVID-19 pandemic had kept theaters all but dark for the last 18 months.

Odom, who won a Tony Award for his performance as Aaron Burr in "Hamilton," opened the show with a musical number, "Broadway's Back," that paid tribute to theater's long-awaited return.

The song began with the Philly native singing on the streets of Manhattan's Theater District. He made his way into the theater and on stage. The song included references to several iconic Broadway shows, and a plea from Odom for people to get vaccinated against COVID-19.

The actor opened the concert with a few remarks about the way Broadway theaters will look and feel different for the foreseeable future. Anyone who attends a Broadway show must be fully vaccinated and wear a face mask.

"Every Broadway theater is going to look like this for a while and that's OK," Odom said. "We're a community and that's what community does. We look out for one another."

Odom and his wife, Nicolette Robinson, also performed a beautiful rendition of "You Matter to Me" from the popular Broadway musical "Waitress."

The concert featured performances from the three nominees for best musical, a reunion of famous Broadway duets and other special guests.

"Moulin Rouge!" captured 10 awards, including best musical. "The Inheritance" won best play and "A Soldier's Play" won best revival of a play. A full list of Sunday night's winners can be found on the Tony Awards' website.

The Tony Awards originally was scheduled to take place in June 2020. Nominations were pulled from just 18 eligible plays and musicals from the 2019-20 season. During the previous season, nominations were taken from 34 shows.

Odom hosting Sunday night's live concert event was just the latest development in what has been a fine year for the East Oak Lane native.

The 40-year-old's portrayal of the late R&B and soul singer Sam Cooke in the film "One Night in Miami" earned him the first two Academy Award and Golden Globe nominations of his career.

Odom also earned an Emmy nomination for his role as Burr in "Hamilton," which debuted as a film adaptation last summer on Disney+. Odom and Robinson celebrated the birth of their second child this year, too.

Odom also will appear in "The Many Saints of Newark," the much-anticipated prequel film of "The Sopranos," when it premieres in theaters and on HBO Max on Friday.