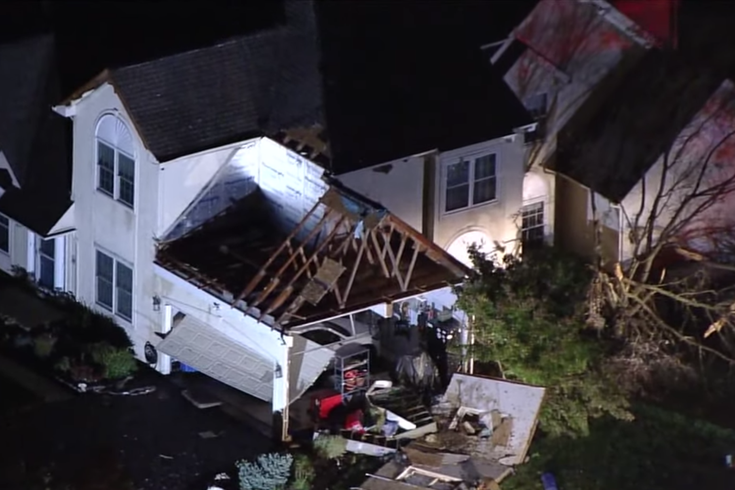 Surveyors in the area on Friday reported an EF2 tornado occurred near Glen Mills, according to the NWS's Mount Holly outpost:

The survey team has confirmed that an EF2 tornado touched down near Glen Mills PA yesterday evening. The tornado was embedded within a swath of straight line wind damage. The survey is still ongoing, so a full report with more details will be released later today. #PAwx

A storm survey team also was dispatched to investigate storm damage in Bucks County, according to Mount Holly crew.

Tornados are measured on the Enhanced Fujita scale (EF), which rates tornados from EF-0 (weakest) to EF-5 (strongest) based on estimated wind speeds. An EF-2 tornado, according to the Weather Channel, indicates a tornado which reached wind speeds between 111 and 135 miles per hour, and caused "considerable" damage in the area

(For reference, an EF-1 tornado touched down in Mount Laurel, New Jersey, back in July, and an EF-0 tornado occurred in South Jersey's Cumberland County back in August.)

At 8 a.m., more than 100,750 were without power in the Philadelphia region, according to PECO's outage map. The outages were due to downed power lines and fallen trees.

Bucks County was hit hardest by the electrical outages, with more than 39,360 customers without power on Friday morning. Chester, Delaware, and Montgomery counties also had thousands of outages.

Service on nearly all SEPTA Regional Rail trains was delayed, suspended, or overcrowded Friday morning due to fallen trees and downed power lines.

Pennsylvania and New Jersey have seen a noticeable uptick in tornadoes, surpassing their respective yearly averages, though scientists aren't exactly sure why.

Over the summer, a Pennsylvania man proposed an interesting hypothesis: traffic circles.