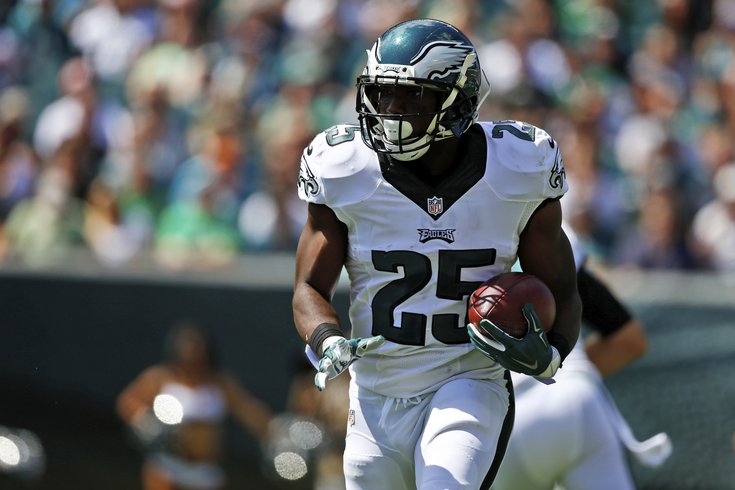 LeSean McCoy averaged a yard and a half per carry less than Darren Sproles last season.

LeSean McCoy, who spent the past season dancing, is shuffling off to Buffalo now, and the Eagles will be a better team because of his shocking departure. Goodbye, LeSean. Don’t forget your earmuffs.

If Chip Kelly’s stunning trade of the over-the-hill running back last week is any indication, Eagles owner Jeff Lurie made a brilliant decision when he handed over all personnel power to the unconventional coach. Based on that deal, Kelly may be an even better GM than he is a coach.

The key to assessing the trade that sent the Eagles’ all-time leading rusher to the Bills for promising young linebacker Kiko Alonzo is to weigh the future versus the past. Kelly sees a runner who lost a yard per carry last season, and figures to lose more as McCoy’s overworked legs continue to age. Meanwhile, fans remember that snow game, those exhilarating runs, that infectious swagger.

When I proclaimed early last season on my WIP radio show that McCoy had lost a step, the wails of criticism were deafening. Even Kelly dismissed the notion when I asked him about it, but now we know the truth. Approaching 27, McCoy has carried the ball 1,461 times. His first step is not as quick. His cuts are not as sharp. Check the tape.

"LeSean McCoy has a legacy in Philadelphia that will ensure all of the honors reserved for the biggest stars – walls of honor, testimonial dinners, maybe even a retired number. But his time here was over."

Kelly’s decision to trade McCoy while the runner still had value was brilliant on several levels. First, it saved the Eagles $10 million under the salary cap – money they have already used to sign Frank Gore, with plenty left to improve other positions. Second, it brought back a linebacker who dominated the NFL in his rookie season before knee surgery sidelined him last year. And third, it removed another attitude issue from the locker room.

Behind McCoy’s amiable demeanor was a me-first player. As I pointed out here weeks ago, the most carries that Darren Sproles got all season came in the very first game, when he ran 11 times for 71 yards against Tennessee. After that, Sproles never got more than seven runs in any one contest, and a total of 13 in last five games combined.

Although he never said anything publicly, McCoy let it be known that he didn’t like sharing the ball with Sproles – or with anybody, for that matter. Kelly had to balance the sensitive temperament of his biggest star with the best interests of the team. In this case, the coach made the wrong choice.

Sproles was a more effective runner than McCoy last season. The numbers don’t lie. The elusive little back averaged 5.8 yards per carry, while McCoy dropped to 4.2. Those stats obliterate the argument that McCoy was the victim of a patchwork offensive line. Wasn’t Sproles running behind the same blockers?

Kelly has always been a master of hiding his true feelings from the public, but there were times on the sideline last season when his frustration spilled out into the spotlight. The most memorable was when the coach was caught yelling, “Hit the damn hole!” after one of McCoy’s maddening dances.

In the end, the only challenge Kelly had was finding a team that didn’t see what he saw, a running back in decline whose $11-million salary far exceeded his value. When the Bills offered Alonzo – one of Kelly’s former stars at Oregon, no less – the coach probably pulled out his own dancing shoes and busted a few moves.

LeSean McCoy has a legacy in Philadelphia that will ensure all of the honors reserved for the biggest stars – walls of honor, testimonial dinners, maybe even a retired number. But his time here was over, even if many of his biggest fans don’t see that yet.

Chip Kelly’s first big move as personnel guru was a shocker to most of Philadelphia, but it was a perfect start in what promises to be an off-season of great change, and great promise.

Hey, it might even be a good move for McCoy. As we all know, he does his best dancing in the snow.

And the actual free-agent signing period doesn’t even start until Tuesday at 4. p.m. What could possibly happen next? Is Kelly done making shocking roster moves, or is he just getting started?

It is already safe to say that Kelly is off to a spectacular start in remaking the roster to reflect his coaching philosophy. Yes, parting ways with Maclin and McCoy – after DeSean Jackson a year ago – subtracts most of the best raw talent on the offense, but it also enables Kelly to hand-pick his own players, find the true winners. Remember, those three studs won no playoffs games in their tenure here. None.

Would anyone like to argue the merits of Byron Maxwell versus either Williams or Bradley Fletcher? The ex-Seattle cornerback represents a massive improvement over those two bumblers. Kelly now has an elite cover corner to match up with the Dez Bryants and Odell Beckham Jrs. on the schedule. Bravo.

And Frank Gore is actually an upgrade over McCoy. That’s right. Even at 32, Gore averaged more yards per carry than McCoy last season, was more effective inside the red zone, and was far more adept at avoiding unproductive or damaging plays. Gore was tackled for no gain or a loss on 52 carries last year; McCoy an appalling 78.

Herremans and Cole had exceeded their expiration dates, and were getting paid far more money than they were worth. They can be replaced easily. Granted, Sanchez is a bizarre signing, given his failure last season, until you consider how perfect a mentor he will be for quarterback Marcus Mariota when Kelly executes that draft maneuver.

Replacing Maclin figures to be a challenge, but the risk of signing him for the $11 million per year he got in Kansas City was simply too great. Does anybody remember how close he came to blowing out his twice-repaired knee in the pre-season? The chances of him staying healthy for the five years on his new deal are less than his coach, Andy Reid, becoming a Chippendales dancer.

So far, what we have learned about Kelly’s style as a GM is that it’s really not much different than his approach as a coach. He works fast, takes chances and is fearless. No one in football is less predictable than Chip Kelly.

Bovada.com found that out last week when it posted, very briefly, the odds of Kelly trading up for Mariota. The Canada-based gambling website gave betters four-to-one odds, and quickly discovered that all the money favored Kelly acquiring his favorite young quarterback. Fans have come to expect the unexpected from Kelly.

With him, it’s really the only safe bet now.

The reaction to McCoy’s abrupt exit from Philadelphia last week was almost as stunning as the trade that sent him to Buffalo. Our football-crazed city did not bellow its rage from the mountaintops. It accepted the loss of a sports hero with little more than a shrug. Oh, the fans showed respect for his seven great seasons here, but then they yawned.

McCoy should not take personally this lack of sentiment. It is commonplace in a sports world now that invites fans to see players as numbers on a ledger sheet – or, in this case, as stats on a fantasy-football roster. Even great players like McCoy do not get the poignant goodbyes that were the norm with Mike Schmidt and Bobby Clarke.

There is really only one player left in Philadelphia whose departure would elicit tears: Chase Utley. He is truly a throwback to another era, with his intensity, his quiet likeability and his championship pedigree. That’s why we asked him on my WIP radio show last week to explain his unique bond with the city.

“I play hard,” he said. “I think they appreciate that.”

That comment is vintage Utley. Why use 25 words when eight will suffice? He speaks a language that appeals to fans, even at a time when interest in his team is lower than at any point since he joined the Phillies. If kids want a role model in sports these days, there is no better choice than Utley. He plays hard. He respects the game.

On the field, McCoy did those things, too, but he added the baggage of not showing up at appearances or big-timing a waitress with a 20-cent tip. Very few sports figures can survive the information overload of today without some issues that hurt their legacy, mistakes that make fans shrug instead of cry when they leave.

Enjoy these final years of Chase Utley’s brilliant career. He is the last of a breed, a sports star whose exit will inspire more than a yawn.

• Phillies president Pat Gillick ended all speculation over who has been responsible for the free-fall of the team since he left the GM job in 2008. He said last week that Ruben Amaro has had final say on all personnel moves. Other voices had input, but Amaro made the decisions. OK, I give up. Why is Amaro still here?

• How much more putrid pitching must we endure before Amaro gives up on Phils’ trade bust Phillippe Aumont? After Aumont served up back-to-back home runs in his first spring appearance last week, the GM actually said the reliever is running out of time. Really? And all it took was five years?

• Fourteen seconds. That’s how close the Flyers came to making the playoff race exciting Saturday in Boston. If they had held a 2-1 lead for just 14 more ticks, they would have been two points behind the Bruins. But Boston scored, then won in overtime. Not this year, Flyers fans.

• The Sixers are so hideous this season, fans who buy tickets can no longer expect to see the star players from other teams. The latest opponent to use Philadelphia as a night off was Atlanta, which rested starters Paul Millsap, DeMarre Carroll and Kyle Korver last weekend. The Sixers actually won the game. Whoopee.

• Phillies coach Larry Bowa revealed last week that he was offered the TV analyst’s job this winter but turned it down to remain on the field. Hey, who can blame him? Nobody will ever really replace a broadcast legend like Jamie Moyer.