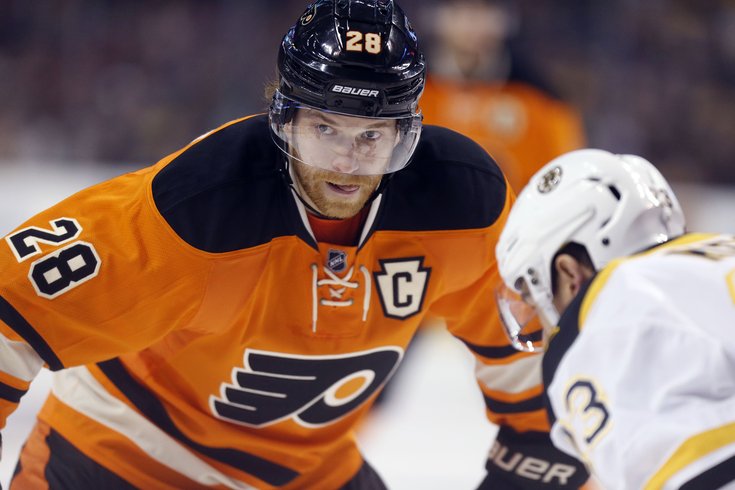 There was no doubt about it. Trailing the Bruins by four points in the standings, the Flyers needed to leave Boston with a pair. More importantly, they needed to get those points in regulation.

Despite falling behind 1-0 in the first period, it looked as though the Flyers were going to get it done. First, Jake Voracek tied the game on a power play in the second period, and then, with just 4:30 left in the game, Chris VandeVelde scored to give the Flyers a 2-1 lead.

But then, with two minutes remaining, Wayne Simmonds took a hooking penalty on an awful a questionable call in the neutral zone. The Bruins pulled goalie Tuuka Rask to give themselves a 6-on-4 advantage and with 14 seconds remaining in regulation, just as Flyers fans were starting to believe their team could make a playoff run, Brad Marchand scored on a deflection to tie the game.

The goal all but guaranteed the Bruins, who collected just 11 points in their previous 13 games (4-6-3), at least one point against the Flyers, something the team desperately needed to avoid. And with a minute remaining in the extra session, it went from good to bad to ugly for Craig Berube's team, as Boston scored -- again off the stick of Marchand -- to come away with a 3-2 win.

Here are some observations on the game:

Despite the result, goalie Steve Mason was spectacular Saturday, stopping 34 of the Bruins 37 shots, including 29 of 30 in the first 59:45 of the game.

Perhaps his best save of the day came in the first period against former Flyer Max Talbot, who was playing in his second game with the Bruins. Take a look:

Steve Mason straight up robs Max Talbot of his first goal for the Bruins. https://t.co/dlGCQ4NV8T

If the Flyers hope to make the playoffs, they'll need more play like this from their starting goaltender. Perhaps playing in some more matinee games could be the trick:

Day game or not, Mason has been exceptional since returning from his injury. In those five games, Mason is 2-1-2 with a 2.00 goals against average and a .927 save percentage. The numbers may not be all that eye-popping, but he's single-handedly kept the Flyers in some of those games with saves like the one in the above video.

Get by with a little help

Over the last two months, the Flyers have gotten very little offense from the two players that lead the team in points, Jake Voracek and captain Claude Giroux.

Voracek, who scored his 20th goal of the season Saturday against the Bruins, now has just three goals since Jan. 12, all on the power play. His last even strength goal came on Dec. 21, 2014. In his last 16 games, Voracek has tallied just eight points* (three goals, five assists).

* Voracek is still tied for fifth in the NHL in total points, however. Both he an Sidney Crosby have 66, while there are four players tied at 67 points.

Similarly, Giroux has eight points (two goals, six assists) in his last 16 games and just four goals and since Jan. 12.

So where has all the Flyers scoring been coming from? In a word, their defense. The Flyers have now gotten at least a point from the defense in each of their last 12 games, including eight from Michael Del Zotto.

Michael Del Zotto left the game in the first period after taking a Dennis Seidenberg slap shot in the left foot. Luckily for the Flyers, he returned in the second.

As mentioned earlier, Del Zotto is one of the defensemen who have stepped up while guys like Giroux and Voracek have been slumping:

MDZ has more goals (7) in last 19 games than Giroux and Voracek combined. Yes, they need him back.

After the game, the Flyers announced that they have recalled defenseman Brandon Manning from the Phantoms.

Roster Update: The #Flyers have recalled D Brandon Manning from the @LVPhantoms.

Rinaldo gets better of McQuaid

Fans got a rare glimpse at the good side of Zac Rinaldo's reputation for being a fighter Saturday against the Bruins. In the first period, after Adam McQuaid laid out Jake Voracek in the Flyers zone, Rinaldo skated over, as if he was looking for a fight. McQuaid immediately dropped his gloves. Rinaldo did not, drawing a two-minute penalty and a Flyers' power play.

That's the good Zac Rinaldo. You don't get to write that sentence often, so when the opportunity presents itself, you gotta write it.

Unfortunately for the Flyers, their power play has been awful the last few games. They were 0-for-7 in their last three before facing Boston.

Things didn't get much better in the first period, as the consensus on Twitter was, well, not very positive:

That PP was awful..

They'd make up for it on their next power play, thanks to Voracek's goal. However, both teams were 50 percent with the man advantage. The Flyers finished 1-of-2 while the Bruins were 2-of-4.

I guess it's time for an updated look at the standings, even though you won't like it.

The Flyers have some company in their quest to catch the Bruins, including the team they'll face tomorrow, the Devils:

The Panthers host the Islanders Saturday night. With the Flyers-Bruins game in the books, the rest are off until tomorrow.

As you can see, with less than 20 games remaining for all these teams, and the Bruins having two games in hand over the Flyers, they really needed the regulation win today. Had they been able to hold on for 14 more seconds, they'd be tied with the Panthers and Senators and just two points back of the Bruins.

Welp... There's next year... *remembers saying it every year since he's been born*