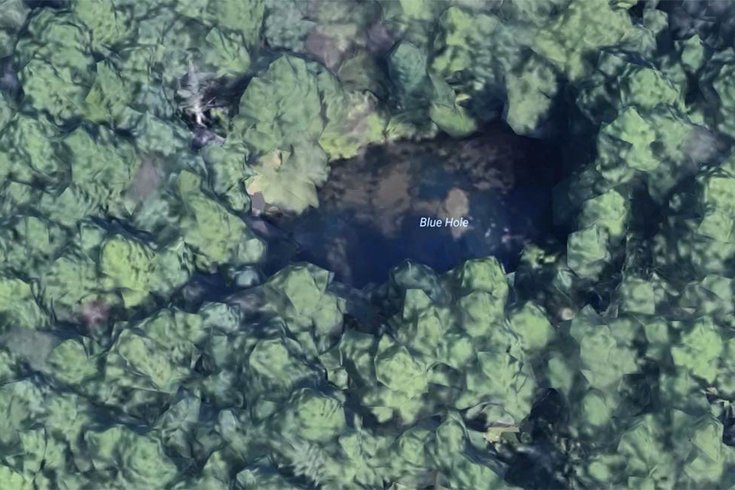 The officers, working in conjunction with five uniformed officers with the New Jersey Division of Fish and Wildlife, witnessed numerous illegal activities at the popular recreation site, Winslow police said. The undercover enforcement assignment also focused on Penbryn Lake, on Penbryn Road; Oak Pond, in a wooded section off New Brooklyn Road; and Hanson Sand and Gravel, on Williamstown Road.

According to police, the Friday-night-to-Sunday-night undercover operation targeted trespassers on the properties participating in illegal activities, including swimming in the quarries, riding ATVs and the drinking of alcoholic beverages.

Two children – ages 9 and 11 – were injured recently when the ATV they were riding was struck by a vehicle. Last week, a man was arrested after a possible drowning was reported at the Blue Hole.

The Blue Hole, a circular lake about 70 feet across, is located in the Pinelands of Monroe Township, Gloucester County, and Winslow Township, Camden County. It is illegal to swim and dive there. The spot was popular with swimmers and partygoers in the 1930s. It can only be reached on foot after a wooden bridge over the Great Egg Harbor River was destroyed by a storm in the 1960s.

Visitors often come from out of the area – some from as far as Trainer, Delaware County – and "use these areas as a haven for illegal activities," police said.

"It's hard to believe that the violators do not know that certain activities are not permitted in the area," the police statement said. "As the undercover officers entered the area and before enforcement action was taken, some of the violators interacted with the undercover officers. They warned the officers, telling them, 'Be careful, the rangers are in the area and they will write you up.'"

The undercover officers thanked them for the warning. Division of Fish and Wildlife officers then moved in to cite the violators.

On other occasions, people drinking alcohol on the property seemed ready to offer the undercover officers a beer until they identified themselves, police said. The violators sighed and said, "Oh my God, it's the cops!"

One woman at the Blue Hole, who was watching over several children between the ages of 2 and 16 who were swimming in dangerous waters, was cited for trespassing, police said. The waters have steep drop-offs of 50 feet or more. None of the children were wearing life preservers.

During the weekend, the following violations were observed:

• 10 citations for the consumption of alcohol in a public place

• 2 citations for being in a park after dark

• 2 for fishing without a license

• 4 other Fish and Game violations

Police said they are not discouraging people from visiting the areas but are asking them to refrain from illegal activities and are promising enforcement. The areas are closed completely between the hours of 9 p.m. and 5 a.m., police noted.