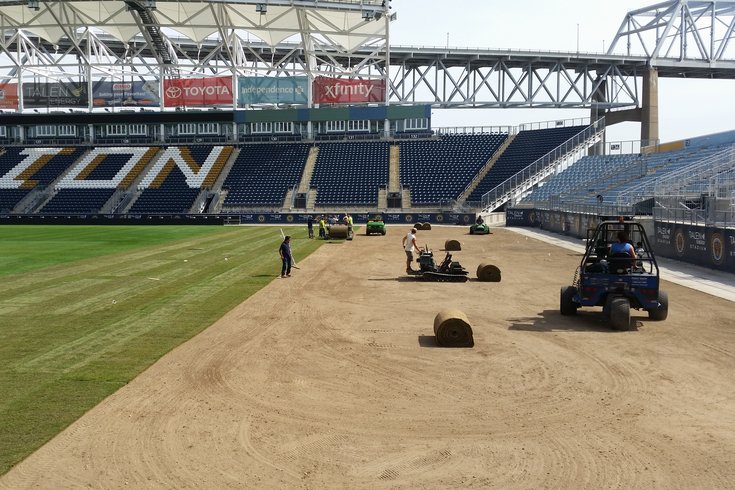 A pair of starters were absent from Union training on Wednesday morning.

Tranquillo Barnetta has swelling in one of his knees and Josh Yaro is going through Major League Soccer's concussion protocol. Head coach Jim Curtin says Barnetta picked up the injury in a late-game collision with Portland's Fanendo Adi. He does not, however, expect the Swiss playmaker to miss out on Saturday's trip to Toronto.

Yaro was already scratched from the Canada trip due to the red card he earned in Portland. His spot at right center back will be filled by Ken Tribbett.

It's a big issue for the Union, who pulled Tribbett at halftime in the 3-1 home loss against Toronto a few weeks ago. The first-year defender struggled in that game and has only played in one match since.

This weekend, he has a chance for redemption against the team that ultimately cost him his starting job.

"I mean, obviously it wasn't my best performance," said Tribbett of the 3-1 loss. "But I'm grateful to have another opportunity to play well against them. There are certain things you can always improve on, such as spacing and (allowing players) in behind. If there's a big, strong guy, you have to learn to use your body. There are a bunch of different things. I've learned my lesson and hopefully it'll pay off on Saturday."

Barnetta picked up a knock in a knee-to-knee collision with Adi. No twist but just swelling. Doing some scans

'YOU'RE GOING TO GET PUNISHED'

Keegan Rosenberry had a poor defensive showing in Portland.

We haven't seen much of that from the all-star rookie, who has been solid and consistent for the majority of the season. In this game, he had to deal with the pace of left winger Darren Mattocks, whose ability to quickly reach the ball and turn gave Rosenberry fits.

Speaking to reporters Wednesday, Rosenberry didn't blame the artificial turf and constant rain, instead taking full responsibility for his performance.

"I wouldn't attribute it too much to the actual surface," Rosenberry said. "We had a couple of days out there to train on the turf and whatnot. It was just moreso about me being sharp and not letting that kind of thing happen. I think, with the exception of maybe one or two other games, I've been good with (wide defending) all year. You fall asleep for one second in this league and you're going to get punished. That's the challenge of being an outside back."

NO PAIN IN THE RAIN

The return could not have come at a better time.

Warren Creavalle and Maurice Edu were not fully fit for the road trip and the Union were ready to rely on Tribbett at the number six position if Carroll was unable to go. Instead, the veteran started, played 79 minutes, and didn't feel any pain.

"I felt pretty good," Carroll said. "I was more fit than I thought I would be after missing 5 games in a row. It was great to put in a lot of work to get back and hopefully be able to contribute in a solid way. I thought that was achieved and it was good to be out there for (79 minutes). I still feel good and still feel healthy. It just would have been better to get a better result, but I'm happy to be back and get some game fitness under my belt."

Crews are laying new sod over 25 percent of the pitch at Talen Energy Stadium.

Workers will have 25 days to restore the pitch before the Union return home for an October 16th matchup with Orlando City.