An updated look at the NFC East's holdouts and suspensions 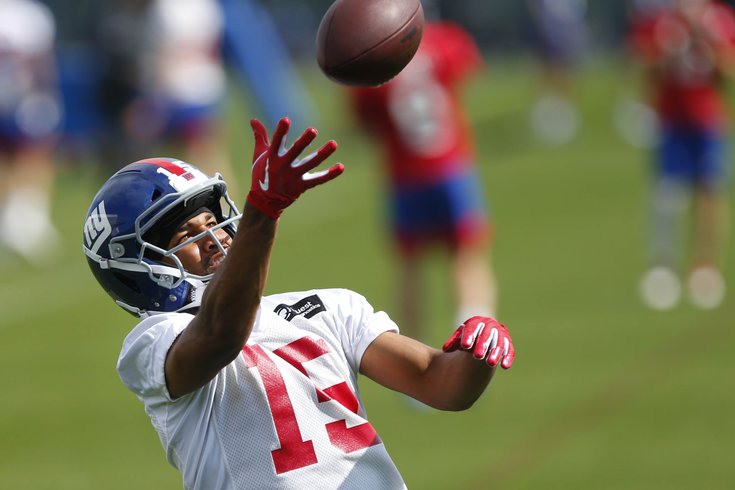 Golden Tate will likely be missed some games this season, which is pretty much the only way he'll be able to emulate Odell Beckham.

Philadelphia Eagles training camp has been quiet so far this year, in terms of off-field drama. The other NFC East camps? Not so much. Each team is dealing with significant issues, so let's take an updated look at what's going on with each of them.

Elliott's training camp holdout is nearly a week deep already, and he is hanging out in Cabo. According to Jane Slater of NFL Network, Elliott and the Cowboys aren't close on a new deal:

How close is this Zeke deal to getting done? A source informed told me, “close? Nope.” So, what are the sticking points? The guarantee? Length? “Everything” #ZekeWatch

As we've noted in the past in greater detail, the Cowboys would have been more than happy to let Elliott to play out his rookie contract, nice and cheap. Conversely, Elliott is right to try to get paid now, rather than allow the Cowboys to run him into the ground before he ever sees an extremely lucrative second contract.

The Cowboys built their team around a strong rushing attack, and, you know, their rushing attack won't anywhere near as strong without Elliott. The guess here is that the Cowboys will eventually cave and make Elliott the highest paid running back ever, because what other choice do they have?

I mean, they could realize that building their team around a rushing attack is a stupid thing to do in 2019, thus kissing the 2019 season goodbye by not caving, but we all know that Jerry Jones isn't punting on a season. Elliott and his camp hold all the cards.

Actually, 'there's almost no way' he'll win his appeal, according to Ralph Vacchiano of SNY (explanation of why he was suspended also in that link). And if indeed Tate loses his appeal, the Giants could be without their top three receivers to start the season, as Sterling Shepard has a dislocated thumb and Corey Coleman has a torn ACL.

So, who would start at WR for the Giants Week 1 if Tate loses his appeal and Shepard isn't ready to play? Can you even name any other Giants receivers? If not, here they are. I have no idea who would start from that mess.

From the Eagles' perspective, it would actually be better if Tate won his appeal and was able to play. Why? Because the Giants play the Cowboys Week 1, and the Cowboys are very clearly the Eagles' biggest threat in the NFC East, with the Giants and the Washington team trailing far behind.

Williams reportedly seems steadfast that he has zero interest in ever playing for Washington again. That notion may be backed by the fact that Donald Penn, a friend of Williams, only signed with the team after having a conversation with Williams. Kareem Copeland of The Washington Post explains why that may mean something:

Donald Penn may have some inside information on the Trent Williams saga, but he is not sharing.

[Washington's] newest tackle said he is good friends with Williams and talked with him before signing. The holdout of the seven-time Pro Bowl honoree has left the organization scrambling to shore up the left side of the line — hence the addition of Penn. But the former Oakland Raider and Tampa Bay Buccaneer said he selected [Washington] from a group of teams that showed interest because he could play on the left side and have the opportunity to start.

If Penn wanted a chance to start at left tackle, and he spoke to Williams, what does that indicate about Williams’s future with the team?

According to Jeff Howe of The Athletic, Washington is already discussing trade.

[Washington is] having trade discussions regarding left tackle Trent Williams, according to a source. It’s unclear what type of compensation they’d look to recoup in a deal for the 31-year-old who is at odds with the organization. There’s a feeling around the league the Patriots would be involved due to their depth issues at tackle.

So what is Williams worth? To a Super Bowl contender with a hole at LT, some are going to say he's worth a first-round pick. But, he's 31, and the team trying to deal him (assuming they are) has no leverage. I'll be stunned if anyone gives up a 1, and think it's more likely he gets moved for something closer to a 3, even if he's Washington's best player.