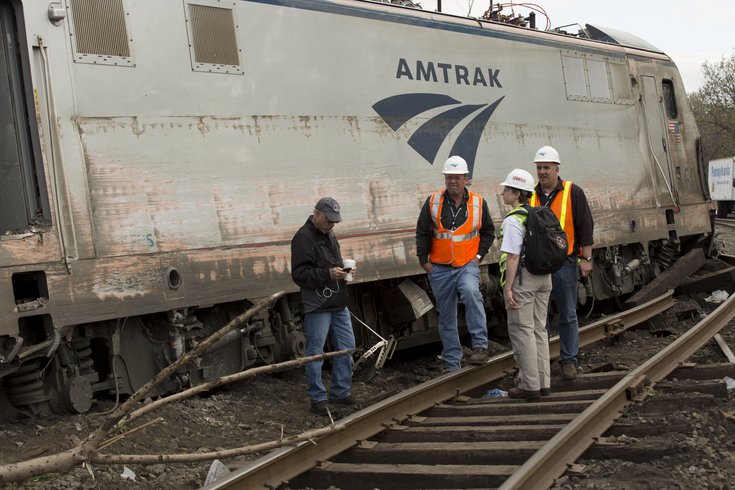 NTSB Recorder Specialist Cassandra Johnson works with officials on the scene of the Amtrak Train #188 Derailment in Philadelphia, PA

As the National Transportation Safety Board (NTSB) continues to investigate in the aftermath of Tuesday's deadly Amtrak train derailment in Philadelphia, the Federal Rail Administration has ordered Amtrak to take immediate measures to improve safety along the Northeast Corridor.

According to NBC News, the FRA issued three orders on Saturday to address rail speed control after Amtrak Train 188 was traveling 106 mph, more than double the limit, at the time of Tuesday's accident that killed eight people and injured more than 200.

"We are continuing to work with the NTSB to understand exactly what happened on Tuesday so we can prevent this type of devastating accident from ever happening again," U.S. Transportation Secretary Anthony Foxx said in a statement made available on the rail agency's Facebook page. "While we do not yet know everything that happened, we do know — without question — that protecting rail passengers is our top priority."

Among the new regulations, Amtrak must immediately implement automatic train control technology for all trains passing through the area in North Philadelphia where Tuesday night's incident occurred. Such technology detects when a train surpasses the speed limit and signals the engineer. If the train is not manually slowed down to the speed limit, automatic controls apply the train's brakes to adjust to a safe velocity.

Another order requires Amtrak to conduct a risk assessment of all curves along the Northeast Corridor to determine if new technology can be used to "prevent over-speed derailments."

Finally, the FRA has ordered Amtrak to increase speed limit signage to keep engineers and fully aware of the authorized speeds at any given point along their route.

"These are just initial steps, but we believe they will immediately improve safety for passengers on the Northeast Corridor," said Sarah Feinberg, acting Federal Railroad Administrator, adding in the statement that Positive Train Control is the most important step that must be taken to improve railroad safety.

On Friday, the NTSB interviewed engineer Brandon Bostian and two of the three conductors who were working on board Amtrak Train 188. The interviews represent an initial step in the investigation, which seeks to determine the how the engineer's actions, mechanical failure, or even object striking the train may have  been responsible for the fatal accident.