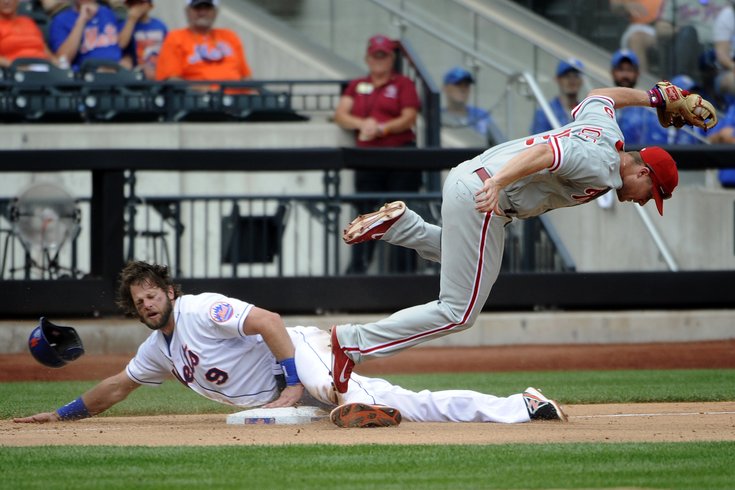 New York Mets' Kirk Nieuwenhuis steals third base safely under the glove of a flying Philadelphia Phillies third baseman Cody Asche (25) in the eighth inning of a baseball game at Citi Field on Sunday, Aug. 31 2014.

Read More
For the Philadelphia Phillies, that 25-year deal with Comcast SportsNet can't kick in fast enough.
Forbes released its annual ranking of MLB team values on Wednesday and the Phillies, despite rising from $975 million to $1.25 billion in worth, operated at a loss of $39 million in 2014.
The Phillies ranked 10th in the league overall, but joined the Dodgers as one of only two teams in the top 12 to operate at a loss the previous year.
With the third highest payroll in baseball last year ($178 million) and $73 million going to Cole Hamels, Ryan Howard and Cliff Lee, it appears the plunge in attendance, among other factors, finally caught up to the team. Tracking ESPN's average attendance at Citizen's Bank Park from the year of the World Series title up to the present shows just how sharp the decline has been relative to the win-loss column (stats via ESPN).

What makes the team's operating loss even more pronounced is that it was $18.9 million higher than the $20.7 million loss absorbed by the Detroit Tigers, the closest team behind the Phillies.

The team's fall has been pretty dramatic, but as Forbes points out, the 25-year deal with Comcast is worth more than $5 billion and the Phillies will own 5 percent of the regional sports network.

According to SNL Kagan, CSN SportsNet Philadelphia charges carriers $4.20 per month, per subscriber, the fourth-highest of any RSN.

As the table above shows, the surest way to get and keep Philadelphians at the ballpark is to build a winning team. In doing so for this past run, the Phillies may have overcommitted, but if the revenue situation turns around with the television deal and the team shows improvement, things could balance out sooner than later.