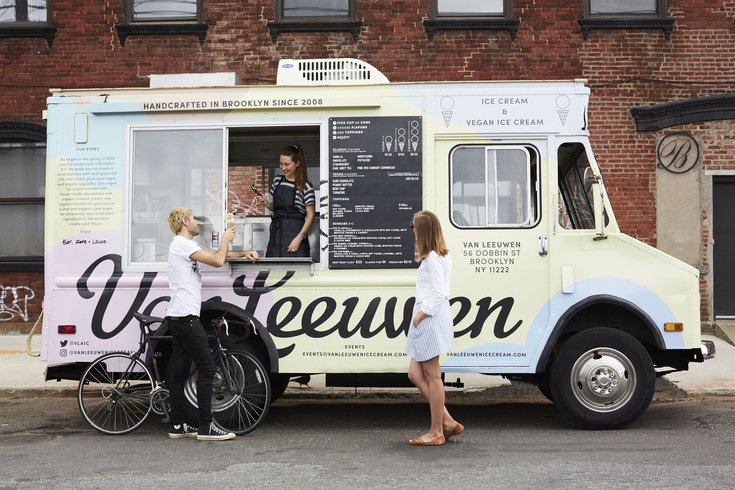 Van Leeuwen Ice Cream, which began a truck in Brooklyn, is opening a second Philadelphia location at 115 S. 18th St.

Van Leeuwen Ice Cream, a Brooklyn-based chain that offers vegan and traditional frozen desserts, is adding a second Philadelphia location – less than a year after opening its first storefront in the city.

"Hey Philly! We're back for round two," the company posted on Instagram.

To celebrate, Van Leeuwen will offer $1 scoops from 1-5 p.m. Free swag bags will be given to the first 100 customers. They will include merchandise designed by artist Amberella, who is known for the heart messages she has placed around the city, Newsbreak reported.

The location will have its own signature flavor, Alex's Birthday Cake, inspired by the April birthday of Alex Holley, the co-host of FOX29's "Good Day Philadelphia."

Standard hours will be noon to 11 p.m. Sunday through Thursday, and noon to midnight on Friday and Saturday.

A third Philly shop is expected to open in Fishtown, at 1601 Frankford Ave., later this year. The brand's first Philly location, at 119 S. 13th St., opened in August.

The new Center City location is not the only big news for the brand.

For a limited time, seven of its flavors will be carried in 3,500 Walmart stores. The flavors include Van Leeuwen's blueberry shortcake, hot honey and pizza varieties.

LIVE GOODER Today is the day people. Allow us to introduce you to our Walmart] lineup: ~ Planet Earth ~ Pizza ~...

Van Leeuwen's also is reviving its mac and cheese flavor, which the brand developed in collaboration with Kraft, to be sold in Walmart. The flavor debuted last summer and quickly gained attention on social media platforms like TikTok.

But the brand is no newcomer to the artisanal ice cream game.

The company started in a truck in Brooklyn in 2008. At the time, its flavors like earl gray tea and honeycomb seemed completely out of the box.

Van Leeuwen also has been serving vegan ice cream since its beginning. It was one the first companies to make vegan ice cream that was palatable, according to Brooklyn Magazine.

The company now has more than 25 locations, mostly in New York City. Van Leeuwen aims to add 20 shops this year and another 40 by the end of 2024.