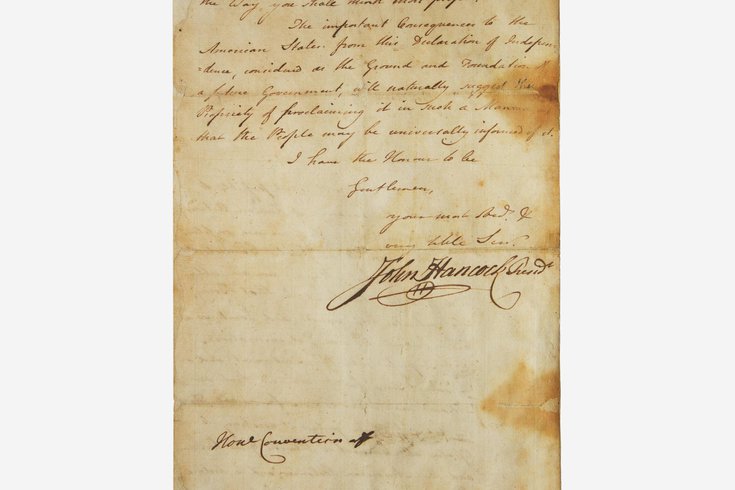 A letter written by John Hancock to the Georgia state legislature announcing the United States' independence from Great Britain will be available for purchase at an auction hosted by Freeman's in Philadelphia next month.

John Hancock's handwriting and iconic signature have become synonymous with the American story.

History buffs who want to own a piece of the Founding Father's well-regarded penmanship will soon be able to bid for a letter in which Hancock declared the United States independent from Great Britain.

Next month, Freeman's will auction off Hancock's letter to the state of Georgia in which the statesman announced the signing of the Declaration of Independence.

The sale will be held on May 4 at 10 a.m. at Freeman's auction house at 2400 Market St. A price estimate is available upon request.

When the Declaration of Independence was signed by the Continental Congress in Philadelphia on July 4, 1776, the document was quickly taken to John Dunlap's print shop, where about 200 copies were printed.

Hancock, who was the president of the Continental Congress at the time, was tasked with informing each of the original 13 states that the U.S. had declared its independence from Great Britain. He sent each one a copy of his letter and Dunlap's broadside.

Dated July 8, 1776, Hancock wrote in the letter that "the Congress have judged it necessary to dissolve all connection between Great Britain, and the American colonies; and to declare them free and independent states … The important consequences to the American states from this Declaration of Independence, considered as the ground and foundation of a future government, will naturally suggest the propriety of proclaiming it in such a manner, that the people may be universally informed of it."

The document features Hancock's famously large signature, which stands out prominently among the other Founding Fathers who signed the Declaration of Independence.

Described as "an unmissable opportunity for collectors," the letter is one of only five Declaration of Independence proclamation documents sent by Hancock to the state legislatures that are still around today.

"Given the rarity of this highly important historical letter, as well as record prices we’ve seen across the board for rare American documents in the past year, we expect a lot of interest and perhaps a not insignificant hammer price," Freeman's Darren Winston said.

How John Hancock Announced America's Independence: The remarkably rare 1776 letter that changed the course of...

Next month's auction of historic books and manuscripts will also feature several other significant American documents.

A rare signers' copy of the Declaration of Independence was sold for $4.42 million last summer. The document's final price was more than five times its pre-auction estimate of $500,000-$800,000. It's the second-highest price ever paid for any copy of the Declaration of Independence and the highest price ever paid for an American document printed in the 19th century.