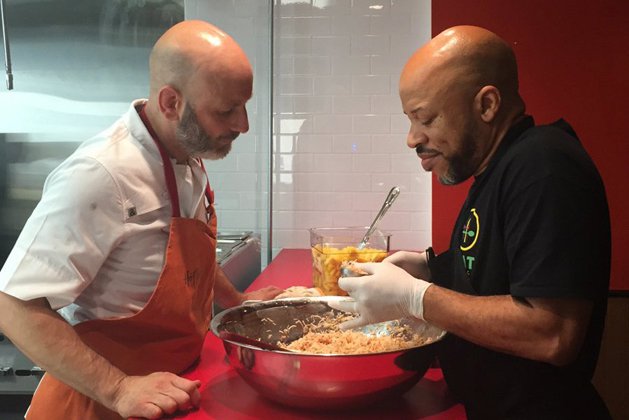 Chef Marc Vetri, left, watches as Donnell Jones-Craven, EAT Cafe's general manager, prepares food. EAT Cafe is a partnership between Vetri and Drexel University that allows customers to pay whatever they can afford for their meals.

It's called EAT Café, found at 3820 Lancaster Ave., and it stands for "Everyone At the Table." The effort was spearheaded by Drexel's Center for Hunger-Free Communities, Drexel's Center for Hospitality & Sport Management, the Vetri Community Partnership, Giant Food Stores and others.

So how does it work? The idea is for residents to stop in, grab a bite to eat and pay back whatever they're able to afford. The food is donated by restaurants and companies like Giant Food Stores, Metropolitan Bakery, La Colombe Coffe and others to the nonprofit.

"... the EAT Café is designed to be a place at a crossroads of the community. A place where anyone can feel comfortable and welcome to enjoy a meal, no matter their ability to pay for it,” said Victoria Egan, deputy director of the Center for Hunger-Free Communities. “Too often, programs that serve people who are hungry can be very isolating. At the EAT Café, we hope to bring people together and create a space for them to connect.”

Since the cafe's success is dependent upon donations, Egan strongly encourages for those who can, to pay a bit more. The cafe will be open Wednesdays through Saturdays from 4:30-8 p.m. with plans on expanding to Sundays and lunch hours in the future.

Donnell Jones-Craven, the general manager, plans on have three-course meals that range from Caribbean and Asian to African and Middle Eastern flavors.

The cafe is intended to help those who face food insecurity, or lack "a reliable and affordable food source," according to Drexel's Center for Hunger-Free Communities.

In 2013, 22 percent of Philadelphians were reported as being "food insecure," according to the Greater Philadelphia Coalition Against Hunger.