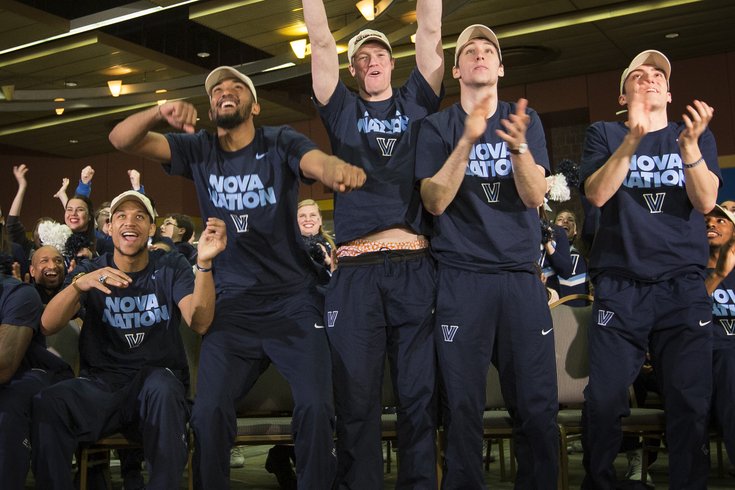 Villanova basketball players, from left, Josh Hart, Darrun Hilliard, Patrick Farrell, Ryan Arcidiacono, and Henry Lowe react after the team was announced as a no. 1 seed in the Eastern Region of the NCAA tournament Sunday.

Heading into Selection Sunday, the Big Five had one team comfortably in the field and one team waiting anxiously to see if they would get included into the Big Dance. 32-2 Villanova received a one seed as expected, but unfortunately for Fran Dunphy and his Temple Owls, the NIT is the only reward they'll get for a 23-10 season.

If they can manage it, the selection committee likes to create good storylines in opening round of the NCAA Tournament. Knowing that, it should be little surprise Villanova is matched up against former Wildcat player Fran O'Hanlon and his Lafayette Leopards, the Patriot League champions, in the 1-16 matchup.

After winning the Big East Tournament, 'Nova got pretty much all it could ask for. Jay Wright's team is the top seed in the East Region, will get to play close to home in Pittsburgh and Syracuse, and are on the opposite side of the bracket from tournament behemoth Kentucky. Virginia, Oklahoma, and Louisville are the 2, 3, and 4 seeds in the Wildcats' region. They'll potentially play the winner of North Carolina State and LSU in the second round.

It's going to be a difficult evening on North Broad Street, as Temple narrowly missed the field. Once you saw that the committee controversially added UCLA and Indiana into the field early on in the selection show, it became apparent that the Owls were in a lot of danger. The tourney is a numbers game, after all.

To make things even more painful, Utah State AD Scott Barnes, who chaired the tournament committee, mentioned on the selection show that bid-stealer Wyoming's victory in the Mountain West Tournament knocked the Owls out of the field. Thanks for nothing, Steve Fisher and San Diego State.

Kentucky, Wisconsin, and Duke are the other top seeds along with Villanova.