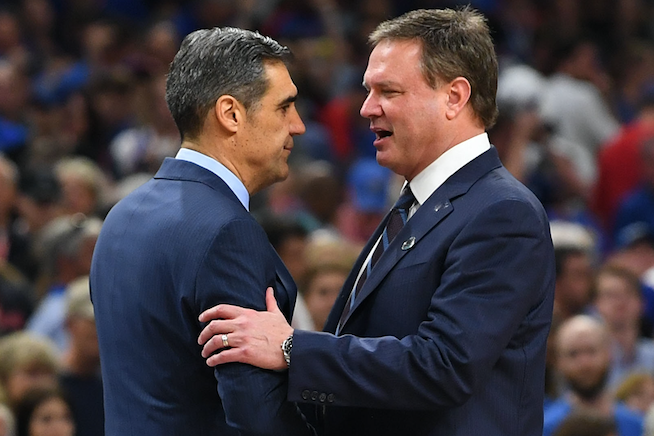 Villanova will compete in its seventh Final Four in school history Saturday when the Wildcats face the Kansas Jayhawks at the Caesars Superdome in New Orleans.

This will be Villanova's fourth national semifinals appearance under head coach Jay Wright — three of which have come in the last six years. The previous two Final Four appearances ended with the Wildcats winning the national championship.

As Villanova has evolved from a respectable college basketball program into a national powerhouse over the last 21 years under Wright, there's been a constant measuring stick through it all: Kansas.

Over the last 18 years, Villanova and Kansas have met eight times, with a ninth showdown on the horizon Saturday. Wright's Wildcats are 5-3 all-time against Bill Self's Jayhawks. Under Self, Kansas has also been to four Final Fours, but with only one national title to show for.

Almost every time Villanova has faced Kansas in recent memory, the game — win or lose — has served as a barometer moment in the Wildcats' emergence as a blueblood college basketball program. Many of Villanova's biggest milestones have come about following a win or loss against Kansas.

Simply put, the Wildcats would not be where they are today without the help of the Jayhawks.

A coming out party

Perhaps the first iconic game in Wright's tenure on the Main Line came in January 2005, when Villanova hosted Kansas at the formerly-named Wachovia Center in South Philadelphia.

The Jayhawks entered the contest undefeated and ranked No. 2 in the country, just two years removed from playing in the national championship. Meanwhile, the Wildcats were 9-4 and, in Wright's fourth season at the helm, were seeking their first NCAA Tournament appearance in six years.

On a day in which a blizzard struck the Northeast, Villanova caught fire and ran Kansas out the gym, 83-62, on national TV. It was the first real statement win for Wright at Villanova.

In many ways, the win was a reintroduction of Villanova on the national stage. The Wildcats would go on to win 12 of their next 15 games, finishing fourth in the Big East during the regular season and advancing to the conference tournament semifinals.

Villanova then earned a No. 5 seed in the NCAA Tournament and knocked off New Mexico and Florida on its way to the school's first Sweet 16 appearance in 17 years. The Wildcats finished No. 19 in the AP poll that year, the first time in eight seasons that Villanova finished in the top 25.

Villanova built upon its strong '04-05 campaign with an even-stronger season in 2005-06. The Wildcats went 28-5 and won its first Big East regular season title in nine years. Villanova earned its first No. 1 seed in the NCAA Tournament and advanced to its first Elite Eight since 1988.

The seeds of Villanova's ascension were just being planted.

The Wildcats and Jayhawks would meet again in the Sweet 16 of the 2008 NCAA Tournament. However, that wasn't a matchup fans were expecting entering the tournament.

Villanova had a bit of an up-and-down season in 2007-08, finishing eighth in the Big East and remaining unranked since late January that year. Nevertheless, the Wildcats were able to sneak into the tournament and grab its last at-large seed.

Villanova then sprung an upset of No. 5 Clemson in the first round and knocked off Siena in the second round to advance to its third Sweet 16 in four years.

Waiting for the Wildcats in the regional semifinals in Detroit were the top-seeded Jayhawks, who dominated Villanova 72-57 on their way to winning the 2008 national title.

That loss would serve as valuable experience and a foundation for what would come in 2009, when almost the entire roster returned and took Villanova to its first Final Four since 1985. It was massive in Villanova's continued development as a college basketball program.

Villanova and Kansas would not cross paths again for five years until the Battle 4 Atlantis tournament in The Bahamas in November 2013.

While both teams entered the early-season contest undefeated, much had changed since they last squared off in 2008. Kansas, ranked No. 2 in the country, had taken a stranglehold of the Big 12 Conference and was just two seasons removed from playing for a national championship.

Meanwhile, Villanova had kind of lost its way a bit. Despite a strong recruiting pipeline, the Wildcats were sent packing in the first weekend of the NCAA Tournament in both 2010 and 2011 before a disastrous season in 2012.

Villanova finished that year 13-19 and 13th in the Big East. It was the school's worst record under Wright, as it failed to qualify for any postseason tournaments. Many fans began to question whether Wright was still the right guy for the job.

The Wildcats rebounded a bit in 2012-13 and got back to the NCAA Tournament, only to lose to North Carolina in the first round.

Nevertheless, it was Villanova who came out on top in Atlantis, beating the Jayhawks 63-59. The Wildcats then defeated Iowa the following night to win the Battle 4 Atlantis title.

Despite getting upset in both the first round of the Big East Tournament and second round of the NCAA Tournament, the Wildcats finished the season ranked No. 6.

In 2014-15, Villanova would go 33-3 and capture its second-consecutive conference regular season title before winning its first Big East Tournament championship in 20 years. The best, however, had yet to come for the Wildcats.

The Wildcats and Jayhawks would next collide in the Elite Eight of the 2016 NCAA Tournament in Louisville.

Villanova entered the contest as the No. 2 seed after winning another Big East regular season title and having torn through its first three opponents in the NCAA Tournament. It was Villanova's first Elite Eight appearance since 2009.

Meanwhile, the Jayhawks were the top seed in the South Region after having the Big 12 regular and conference tournament titles. It was Kansas' first Elite Eight appearance in four years.

In a defensive battle, Villanova defeated Kansas 64-59 to advance to its first Final Four in seven years. The Wildcats went on to demolish Oklahoma by a Final Four-record 44-point margin before winning the national championship over North Carolina behind Kris Jenkins' game-winning three at the buzzer.

Two years later, the Wildcats and Jayhawks would clash in the 2018 Final Four in San Antonio.

Villanova, the top seed in the East Region, was back in the national semifinals after a disappointing second-round exit as a No. 1 seed in the 2017 NCAA Tournament. The Wildcats entered the game having won the Big East Tournament title and riding a nine-game win streak.

Meanwhile, the Jayhawks were back in the Final Four for the first time since 2012 after earning the top seed in the Midwest region. Once again, Kansas had won both the Big 12 regular season and conference tournament titles.

But it didn't matter, as Villanova blew out Kansas 95-78 on its way to winning its second national championship in three years and third title in school history. The Wildcats made a Final Four-record 18 three-pointers over the Jayhawks, and Villanova won each of its six tournament games that year by double digits.

Since meeting in the 2018 Final Four, Villanova and Kansas played a home-and-home series in 2018 and 2019, with each school winning on its respective home floor. Saturday night's game will be the fourth time that fifth-year seniors Collin Gillespie and Jermaine Samuels face the Jayhawks in their careers.

Villanova is going for its third national championship in six years and fourth title in school history. It's only fitting that the Wildcats' path to cutting down the nets once again includes a highly-anticipated showdown with Kansas.