The drugstore at the corner of Broad and Chestnut streets is among several shuttering U.S. locations 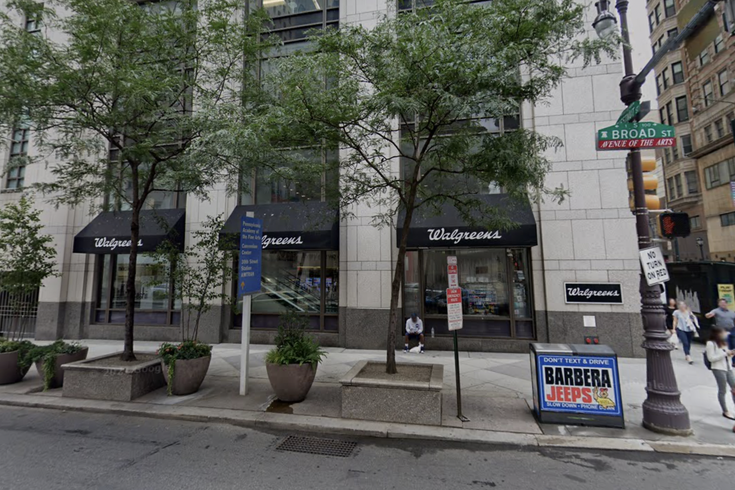 Philadelphia's Walgreens flagship store at the intersection of Broad and Chestnut streets will close on Feb. 28, 2022.

After a run of nearly a decade in Center City, Walgreens plans to close its flagship Philadelphia store at the corner of Broad and Chestnut streets at the end of February.

The pharmacy store chain recently posted a sign on its front doors announcing the pending closure at 3 p.m. on Feb. 28. The store's prescription records will be available at all other locations, including the nearby Walgreens stores at 1101 Locust St. and 1617 John F. Kennedy Blvd.

Walgreens did not immediately respond to a request for more information about the decision to close the 24-hour store, a prominent three-level space with a cafe and more extensive food and retail offerings than its other drugstores.

When the store opened in 2013, it was one of eight "flagship" super Walgreens locations that opened in U.S. cities to capitalize on brand exposure and higher foot traffic in densely populated corridors. In Philadelphia, the location at Broad and Chestnut streets had previously been a Borders bookstore that closed in 2011 as the company entered bankruptcy.

In recent months, Walgreens has announced plans to close more than 20 U.S. stores partly due to high rates of shoplifting and what the company described as "organized retail crime." Five Walgreens stores in San Francisco alone have been closed due to security concerns.

"During this time to help combat the issue, we increased our investments in security measures in stores across the city to 46 times our chain average in an effort to provide a safe environment," Walgreens spokesperson Phil Caruso told NBC News last fall.

In Philadelphia, the decline in foot traffic in Center City during the pandemic has hit retailers especially hard over the last two years. There were signs in the fall that Center City was returning to pre-pandemic levels of pedestrians, aided by sustained events such as the Christmas Village.

But as the omicron surge of COVID-19 brought unprecedented transmission over the last two months, those numbers again fell.

Public health officials see signs that the omicron wave is past its peak in Philadelphia, offering daylight for businesses that have survived two years of stop-and-go shopping conditions.

The pending vacancy at the corner of Broad and Chestnut streets adds another to a corridor that in 2020 saw the closure of the Wawa at Broad and Walnut streets, which remains unoccupied. Both were formerly retail locations — Robinson Luggage Co. and Borders — before they became convenience-related businesses. It will be interesting see what these spaces attract in the years ahead.