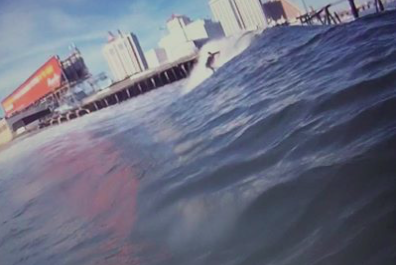 Footage from lost GoPro that washed up on an Ocean City beach after Winter Storm Stella.

Investors have been playing an interesting game with action camera maker GoPro for the better part of the last year, sending its stock up 16 percent after the company announced layoffs and revealed sunny revenue numbers last week. But in the bigger picture, GoPro's outlook has been ominous in recent years after it once took the market by storm in the early 2000's. Investors are selling it short as the company continues to reinvent itself.

Here's a simple story that should help them remember their roots. They have a durable product.

In Ocean City, near the 30th Street Beach, Jamie Weir went on his usual post-storm walk to find all kinds of interesting things that wash onto the shore, according to CBS3. This time, he happened to spot a strap in the sand and was amazed to discover that it was a GoPro sealed in an air-tight container.

Weir popped it out, saw that it was dry and turned it on to find that it worked. He took the camera home and looked through the clips before uploading the following video to Facebook on Sunday night, hoping social media could reunite the camera with its former owner. Weir's post said one of the videos indicates the camera was lost six years ago.

By midnight, after the video made its rounds, owner Andrew Finnerty was found. The former Atlantic City Beach Patrol member told CBS3 he actually lost the camera in Atlantic City last October, but the date reset to 2010 because the camera's battery died. He added that he spent a couple days looking for the GoPro, but ultimately concluded that it was lost for good.

Weir and Finnerty were expected to meet up to make the exchange this week.