WATCH: Behold the creation of the first-ever 'Cheese Gritty' 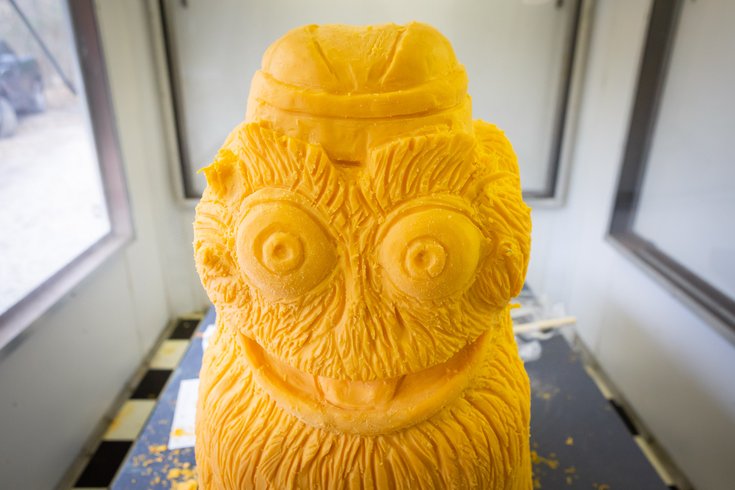 Jim Victor and Marie Pelton have been at the food-sculpture game for a good long while now. What’s been going on in a temperature-controlled trailer parked in the couple’s Conshohocken driveway over the past several days is a rather unique project, though.

With a trio of 40-pound bricks of Cabot cheddar cheese, they spent the better part of the past few days carving a cheesy homage to Gritty. Yep. Thanks to the married couple, we can now add a 2-foot, 2-inch tall cheese sculpture to all the pomp and circumstance accompanying the new Flyers mascot’s arrival in Philadelphia.

On Friday, the Gritty food sculpture will debut at a press preview for a “Very Philly Christmas,” a four-day event organized by the Historic Houses of Fairmount Park, the Fairmount Park Conservancy and Philadelphia’s Department of Parks & Recreation.

Cheese Gritty will debut on Sunday when “Philadelphians young and old” are invited to come take selfies with, and admire the essence of, the culinary creature. So, too, will The Ice Bar at Lemon Hill Mansion, which is also a rather big deal.

In the days before the event, Victor and Pelton (professional aka JVMP Food Sculpture) kindly pulled back the curtain on their process so we could see – and share with you – how such cheesy art comes to be.

The duo's unique trade (up to and including a car made entirely of cheese) has drawn much attention over the years.

They spent much of Tuesday arranging the blocks into a secure fashion, using metal rods inside, so the sculpting could proceed in earnest on Wednesday and Thursday.

A time crunch was on, as they would head to New York immediately upon completion for a food-sculpture event for Chipotle. (The latter art would face challenges with the dearth of romaine lettuce in the area on account of that whole E. Coli problem.) 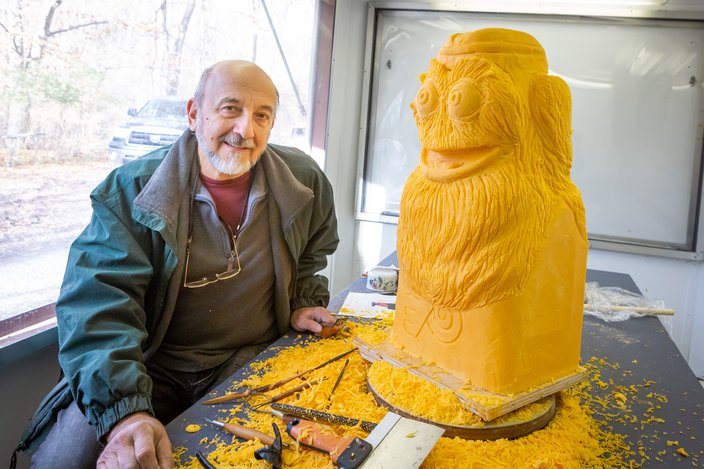 Artist Jim Victor sits with the Gritty sculpture he and his wife Marie Pelton created from three 40-pound blocks of Cabot cheddar cheese.

While Gritty is a new creature, this sort of work is nothing new for Pelton or Victor, whose food sculpting dates back to the early 1980s.

He was commissioned – after a referral from one of his students at Rosemont College – to create chocolate portraits of Mickey Rooney and Ann Miller to promote their Broadway play “Sugar Babies.”

A not-so-fun-fact that Gritty would totally appreciate: That commission almost took a turn for the disastrous. At the unveiling, Miller bumped into the table, sending the sculptures tumbling to the ground, thus necessitating some emergency creative surgery in a dressing room to save the day.

"Preparing for disasters is always a part of this business," he said.

Amid cheese already shredded from the three blocks (which were situated atop a turning table) were four photographs of Gritty along with a cheese knife, regular knife, loop tool and perforated rasp.

Those are the tools of the cheese-sculpting trade, with the photos helping to guide the creative vision.

“You can get a strong feeling from looking at the pictures, but now to translate that gets to be tricky,” Victor said on Wednesday morning, as Gritty’s face, helmet and googly eyes started taking form.

“We’ve had a bunch of cheese projects this year,” he noted of a genre that saw him recently buy an extra seat on an airplane for a flight to a recent unveiling in California. “Cheese is taking on a life of its own because people love the cheesiness of it.

"It's something tasty to eat, but also something crude can be considered 'cheesy.' We're living in such cheesy times in a sense.”

To be sure, the unmistakable smell of cheesy permeated the air inside the trailer as Victor took the loop tool to Gritty's face for fine-line detailing.

He showed how cracks or holes in the work could be patched over with the shreds of cheese that continued to fall from the blocks as he spoke.

By 1 p.m., Pelton noted that it looked like Victor might finish it up on Wednesday, but he was quick to say that wouldn't likely happen. Much work was left to be done. At least one proverbial bullet had been dodged, though.

"I asked for half of a commercial block at first. That's 320 pounds," he said. "Thank God they didn't send it. We're very much facing a deadline clock with this, and that would've been too much. Cabot gave us enough cheese for this.

"Now, we're just trying to get Gritty out there for the unveiling. There's so much that goes into it."

The work carried over into Thursday afternoon with Pelton taking the lead on some finishing touches while Victor transitioned over to the Chipotle work going on inside the garage-like studio a few steps away from the trailer. 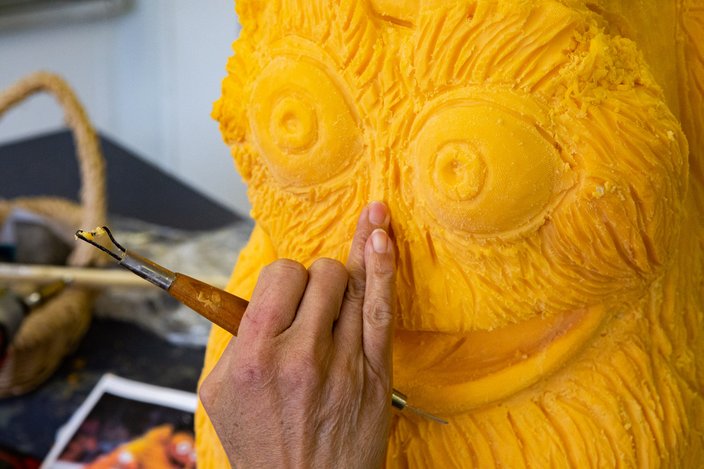 Food sculptor Marie Pelton puts finishing touches on a sculpture of the Philadelphia Flyers' mascot “Gritty” made of cheddar cheese.

After Gritty's wild hair was addressed, she got to work on the Flyers logo, which would peek out from under the mascot's beard on cheese as it does in real life.

"There's a lot that goes into it. Even though it's not a portrait of an actual person, you want to be able to give the thing personality. That's the most important thing: giving it personality."

Oh yeah, unlike other food sculptures created with consumption in mind (i.e. cakes or chocolates), Pelton said that Cheese Gritty "is not intended to be eaten." So, show some respect if you head out to Lemon Hill Mansion on Sunday.