WATCH: Jimmy Fallon in Philly for the Roots Walk of Fame induction 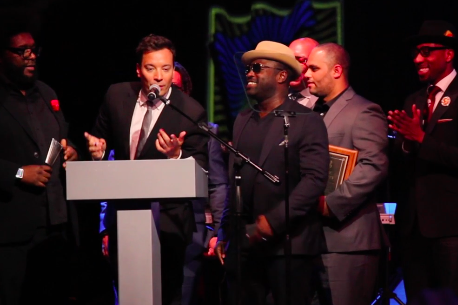 Jimmy Fallon stands with the Roots at the podium of the Philadelphia Music Alliance Walk of Fame induction on Monday, October 26, 2015.

Earlier this week, hip-hop immortals the Roots were inducted onto the Philadelphia Music Alliance Walk of Fame, part of a class that included jazz icon Billie Holiday and disco group the Trammps.

Late night host Jimmy Fallon had the honor of introducing the Roots for their acceptance speech, Rolling Stone reports. Fallon spoke about how important Philly has remained to the band despite their trip up I-95 and then revealed the 3-week silence he received after taking a chance on asking the Roots to be his 'Tonight Show' house band.

And then out came the Roots, led by Ahmir "Questlove" Thompson and Tariq "Black Thought" Trotter. Questlove spoke about how he and Black Thought worked on their first demo the day his father, musician Lee Andrews, was inducted into the Walk of Fame – never imagining that 25 years later, he would be a leading creative force behind one of hip hop's most enduring successes.

Black Thought spoke philosophically about the significance of the moment as a landmark for the future of the city and as a representation of our times.

To close things out, Fallon presented the band with a special gift celebrating the Roots' accomplishments: a framed display of three early albums  – 'Do You Want More?!!!??!', 'Illadelph Halflife,' and 'Things Fall Apart' – which collectively sold over 2,000,000 copies.