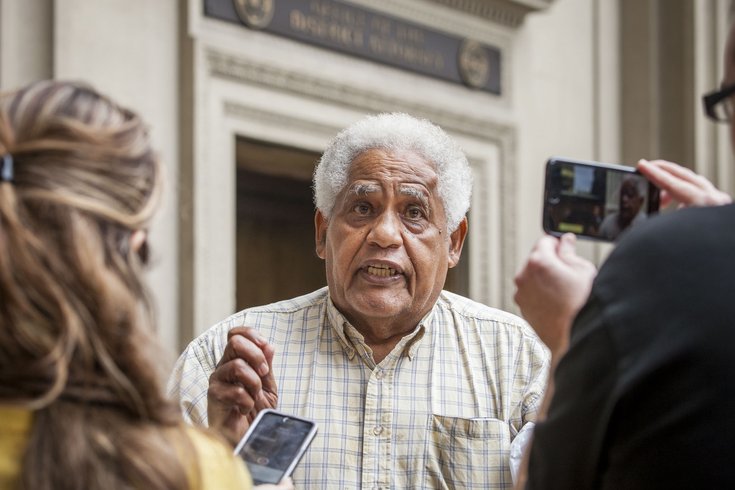 Everything was a go as of 6 a.m. Thursday when T. Milton Street Sr. logged on to Facebook with a message that read, in part (all is sic), “Come to the rally today, 12noon, in front of evil seth office. There's more you need to know about ambitiously evil Seth.”

The Seth to whom he alluded was District Attorney Seth Williams, outside of whose office Street planned to hold a racy press conference including pornography and calls for firings related to Pennsylvania’s "Porngate" scandal.

It’s a tale that PhillyVoice first shared with you two weeks ago in a post that noted that Street, who is “spurred on by a theory that several African-American elected officials were indicted as part of an investigation with racial undertones,” planned to air his grievances publicly.

Initially slated for last Tuesday, the event was rescheduled for noon today, Nov. 5. Alas, the uncertain weather forecast was not amenable to hosting an outdoor press conference where electronics would play an integral role in publicly airing pornographic images at the heart of Street’s issues with the DA’s office.

So, as you can see in the video below, he postponed said event until next Tuesday at noon.:

He did, however, provide a trio of reporters who didn’t get word of said postponement with fliers about his “Rally For The Preservation Of Legacy” event.

That flier framed the event as a defense of three state representatives ensnared in a sting operation that led to charges filed by Williams after embattled state Attorney General Kathleen Kane opted against pursuing them.

That story has many tendrils, but the one Street is fixated on is how investigators were also ensnared in unsavory Internet activity.

Street reserves the bulk of his ire for Fina, who, per Street’s event flier, “entertains himself at OUR EXPENSE, while Seth Williams seeks to DESTROY BLACK OFFICIALS for Personal Gain.”

So, yeah, Tuesday, with the promise of "eye-opening material," should be fun (provided there's not another postponement).

Asked what to expect of it, Street said, "Anything!" (Spoiler alert: He fully expects to get arrested, again.)

The postponement, however, wasn’t all for naught.

Street weighed in on a few political issues before leaving the sidewalk outside the DA’s office.

Asked for his thoughts on Mayor-Elect Jim Kenney, against whom he ran in the May primary, Street said Kenney “is a good guy. He'll do a good job as mayor or die trying."

In regards to Chaka Fattah Jr., son of a same-named U.S. representative, who would soon be found guilty of fraud charges, he said the defendant shouldn’t have defended himself on federal trial.

“I’d still be in prison if I did that,” Street said of his 2008 conviction on federal tax charges.

He reserved his harshest words for state Rep. Dwight Evans, specifically for announcing that he would run for U.S. Rep. Chaka Fattah’s seat. Street’s beef? Evans “is disgusting” for running against Fattah instead of waiting for the federal case against him to make its way through the courts.

“Innocent until proven guilty,” he said.