What to watch on Netflix during Wednesday's nor'easter

Snow, wind and cold set to hit Philly region; enjoy your day off with these movies 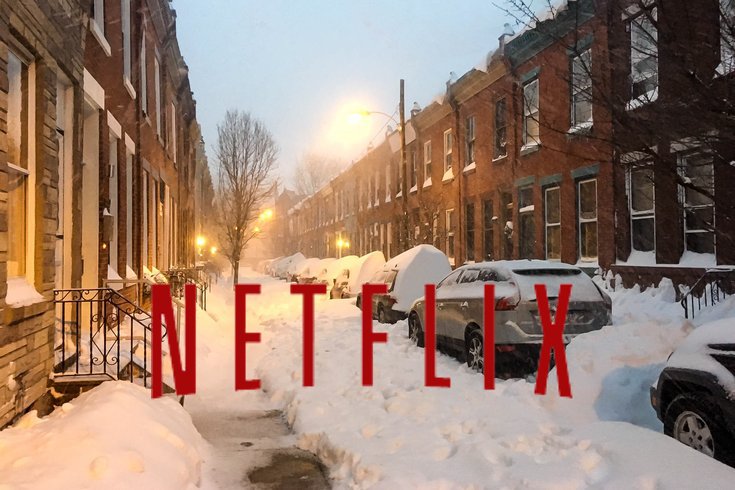 The Netflix logo imposed over a photo of snow clogging the streets on North Bucknell Street in the Fairmount section of Philadelphia.

For the second time in the span of a week, the Greater Philadelphia Region is forecasted to be hit by a brutal nor'easter. Snow, wind and cold temperatures threaten to once again cripple the area. That likely means many schools and offices will be closed for the day.

If your power isn't knocked out — which is a distinct possibility — and you have the day off or you're "working" from home, it'll be the perfect time to park your tush on the couch and binge some Netflix.

"But what will I watch?" you ask me. "I'm incapable of identifying my own personal preferences and need someone in the media to narrow my options! Help!"

Please, stop crying! It's making me uncomfortable. Here, I've picked out several select moving pictures available on the streaming service, most of which have been added recently. If you use a different streaming service like Hulu or Amazon, please email me your username and password so I can use your subscription.

A classic Apatow production, Jason Segal, Mila Kunis, Kristen Bell and Russell Brand are all hilarious. But what puts this one over the top is Jonah Hill, who thrived in minor comedy roles like this (See: "The 40-Year-Old Virgin") before busting out into a big-time movie star. Hill plays Matthew, a waiter enamored with rock star Aldous Snow, played by Brand. Soak up all of the awkward, obsessive goodness Hill has to offer.

Is it as tightly packed, funny and gripping as "Goodfellas," the other collaboration from writer Nicholas Pileggi and famed director Martin Scorsese? No. But it still features all the same violent mafia action that you'd expect, with predictably brilliant performances from Robert DeNiro, Joe Pesci and Sharon Stone. It's also long as all heck, coming in at just under three hours, which is a good thing when you have an entire day stuck inside. (Or, you know, you could also just watch "Goodfellas.")

I never read the books as a kid, so I had no expectations when my roommate recently put this on. I was more than pleasantly surprised. Not to sound cliché, but the humor works no matter how old you are, especially if you like childish toilet humor (a personal favorite of mine). One of the character's names is Professor Pee-Pee Diarrheastein Poopypants, Esq. That alone forced me into tears of laughter, and Nick Kroll's perfomance as Poopypants is pleasantly silly. Also, Philly native Kevin Hart voices one of the main characters!

Sam Rockwell is on the moon and weird stuff happens. If you like mysteries, space and Sam Rockwell — which I do — you will enjoy this movie.

Going to hand this off to fellow trash TV lover and co-worker Sinead Cummings for a description:

First off, it stars Sarah Michelle Gellar, Ryan Phillippe, Reese Witherspoon and Selma Blair in all their '90s glory. Second, it's a completely twisted movie and that's what makes it so fun to watch. Two NYC step-siblings are out to corrupt a virgin, played by Witherspoon.

If you're a "Gossip Girl" fan and you haven't seen this yet, you're missing out. The movie is all about rich kids acting badly, while wearing amazing clothes.

Even if you can't fully get behind the ridiculous/scandalous plot, the movie's soundtrack makes it all worthwhile. "Bitter Sweet Symphony" for the win.

One more thing: Sinead and I weren’t sure whether or not to label this as "angsty teen" stuff because the movie is rated R for "strong sexual dialogue and sexual situations involving teens, language and drug use." I decided to leave as is, because even though anyone under 17 would have needed a parent or guardian to see this when it was in theaters, it's ridiculous to argue that a movie about rich teenagers having sex is aimed at anyone but teenagers. It's like if Harry Styles was in a liquor commercial. We know a large portion of the audience you're trying to reach isn't 21 or older. Come on.

Alright, rant over. Enjoy your day off.