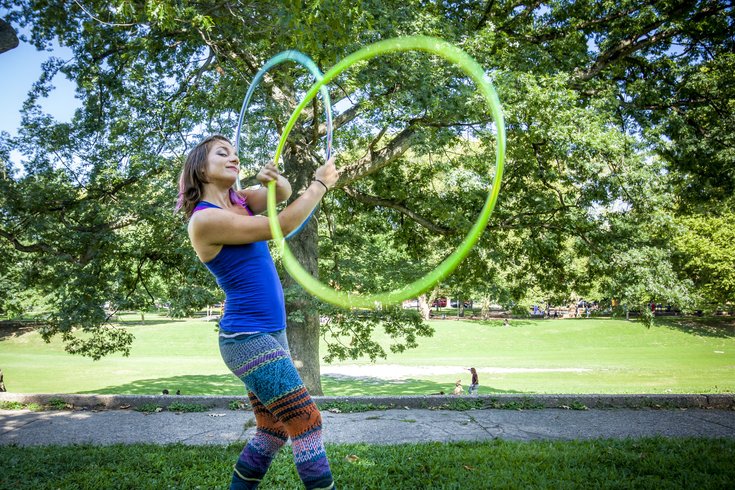 Dana Ricci hoops in West Philadelphia's Clark Park. Clark Park is one of the more popular hang-out spots for hula-hoopers in the city.

Hula-hooping's not just for kids on the playground anymore.

The Spin Coalition recognized as much when it emerged in South Philadelphia in 2011 to bring together (mostly) adult hoopers and flow artists. And just last week, more than 700 people showed up for the Return to Roots festival in Medford, N.J. Largely thanks to exposure from the rave scene, hula-hooping has emerged as a hobby -- nay, a lifestyle -- all its own.

The reason? For many, it's about the meditation.

"My entire life changed the moment I got a hoop," Meagan Ruppert, who founded Return to Roots, told PhillyVoice. "The thing allowed me to have that meditative space -- a space for personal processing. And it opened doors to a totally different lifestyle."

Hooping, she said, showed her that she could connect with others without the regular use of drugs and alcohol -- a dependency she'd taken up while traveling between 2008 and 2010. It's as much a hobby for her as it is a lens of truth.

"I moved to the Poconos in 2010 and started practicing every single night, and in that space I had the realization that I had a problem," she said. "The hooping gave me a space to process what was going on inside of me and outside of me -- taking time for myself each night to be alone with whatever came up, and whatever came through. Realizing I had a drug and alcohol dependency was a challenging thing to admit to myself, but hooping enabled me to process that."

Meagan Ruppert hoops atop her roof in West Philadelphia. New hoopers who want to use hooping as meditation, she advised, should first practice and be patient. "It's like watching water boil," she said. "It happens when it happens." (Thom Carroll / PhillyVoice)

Ruppert said she's been in control of her drug and alcohol use ever since. At her peak, she said she hoops for about 30 minutes each day. She hosts the Return to Roots festival every year as a means of empowering others and showing hoopers the power of a hoop-enabled flow state.

Shigenori Nagatomo, a professor of depth psychology and meditational experience at Temple University, told PhillyVoice that the idea of hooping-as-meditation may not be well-established yet, but it isn't altogether far-fetched.

"There are two ways to get into a meditation state: One is by engaging in a constant motion, or a deep, absorbed state through constant continuous motion; the other is through continuous sitting. So if there is anything resembling a state of meditation by engaging hula hooping, that belongs to the former category," he explained. "It depends on how easily a person can forget themselves."

It also matters how involved the movements are, he said. So, if a person is only hooping with their waist, it makes achieving a meditative state more difficult. If the movements are more involved, however, involving arms and legs, then there's a higher likelihood of absorption in the activity. He likened it to joggers who enter a flow state during long runs, noting that it involves movements of both arms and legs.

Still, it's ultimately about a person's ability to let go.

"The essential thing is to get lost in the act of doing," he said.

Nellie DiPietro uses her arms to hoop in Clark Park. She describes hooping as a 'trance-like' experience. (Thom Carroll / PhillyVoice)

Nellie DiPietro, of Ambler, Montgomery County, first encountered hooping when she stumbled upon a woman on the street who, hoops in hand, casually asked if she knew how to hoop. Naive, DiPietro nodded affirmatively and showed off with a few thrusts of her hips -- a movement that didn't exactly "Wow" her audience.

"It dawned on me [in that moment] that there was a lot more out there in hula-hooping than I knew about," DiPietro told PhillyVoice. "Eventually I understood, seeing more hula hoopers, and saw that there is so much more than hooping around your waist."

DiPietro, who's now a board member for the Spin Coalition and part of the performance-art hooping troupe Aberration Delegation, uses her hands, shoulders and legs to hoop -- not just her waist. She also uses fire hoops, hoops that feature live flames, which she admits is a little harder to accomplish a flow state with, but has its own disorienting-but-satisfying experience.

As with Ruppert, she found that hooping had a sort of healing effect.

"Like a lot of hoopers, I picked it up when things in my life were really bad, and I just needed something to do -- something constructive, physical and satisfying," she said. "I've met so many women through this and have such a broader group of friends now."

Dana Ricci hoops in Clark Park. "I used to be too embarrassed to hoop at a park," she said. "Now I can do double hoops -- even square hoops. They're called 'squoops.'" (Thom Carroll / PhillyVoice)

South Philadelphia's Dana Ricci, who today teaches lessons at Women's Fitness Solutions and performs professionally at events and private parties, began her journey with hooping out of sheer curiosity with friends in 2012. They discovered hooping on YouTube and, intrigued, took a class together at Torrent Collective.

At first a curiosity, it became a sort of side career.

"For me, specifically, it gave me a way to find artistic expression in my professional work," she said. "When I was a kid I dreamed of being a gymnast or a Broadway star, and it’s great to be close to [those], becoming a circus performer."

The flow-state perks were like an added bonus when she discovered them, she said. And, like so many others, it came at a time in her life when she needed the meditation.

“Hitting the flow state is definitely part of this," she said. "When I started hooping I was working a full-time office job and it was the perfect way to escape and have a creative outlet and use a different part of my mind."

In many ways, it's upended who she is and has given her perspective. Making money off of it is just a bonus.

"It's taught me to be a student of something, but also a teacher and a performer, and that's been great," she said. "I'm happy to have been caught in this rotation."