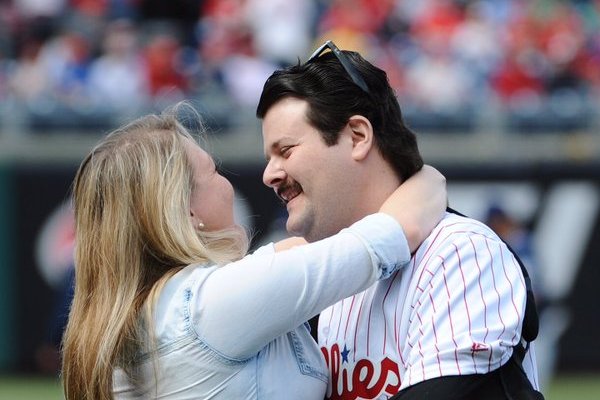 Officer Jesse Hartnett embraces his girlfriend after proposing to her following his ceremonial first pitch at the Phillies home opener Monday, April 11, 2016. Hartnett was attacked while on-duty by a gunman in January.

The Philadelphia police officer who was ambushed by a gunman earlier this year added a heartfelt chapter to his long road to recovery Monday.

Jesse Hartnett, who was attacked while sitting in his police cruiser in January, threw the ceremonial first pitch at the Phillies home opener.

Despite his arm cast — he suffered three gunshot wounds to his left arm — Hartnett, a four-year veteran of the force, was able to throw right-handed to catcher Carlos Ruiz.

Hartnett then went to his girlfriend, pulled out a ring and popped the marriage question; she, of course, said yes. Here's a video of the proposal via Sen. Pat Toomey:

Watch Philly Officer Jesse Hartnett propose to his gf after throwing out the 1st pitch at today's @Phillies game!https://t.co/jmGrt8niLO

Hartnett has been recovering at home since being released from the hospital and has received plenty of support thanks to a GoFundMe page set up by close family friends.

His alleged attacker, Edward Archer, 30, of Delaware County, has been charged with attempted murder and related offenses. A pre-trial conference is scheduled for April 21.