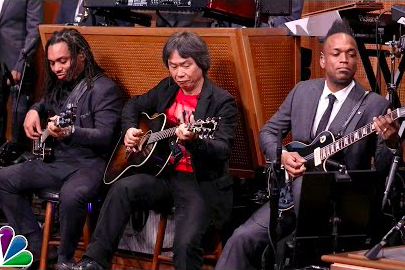 One of the most memorable melodies in the world, right up there with the English alphabet and Beethoven's "Symphony 5," has got to be the theme song to Nintendo's "Super Mario Bros," without a doubt.

Composed by Nintendo sound designer Koji Kondo, the jingle was one of six he wrote for the original "Super Mario Bros." debut on the NES in 1985, according to an interview with Wired. The tune, dubbed "Ground Theme," was chosen because game developers felt it accentuated the side-scrolling action.

Over 20 years at Nintendo, Kondo went on to score the brass brilliance of "Legend of Zelda" and basically every other Mario game known to man.

Earlier this week on "The Tonight Show Starring Jimmy Fallon," The Roots welcomed not Kondo, but Mario and Zelda creator Shigeru Miyamoto to join them for a rendition of "Ground Theme."

Nintendo took a huge leap forward today with the release of "Super Mario Run," its first true smartphone game available on all iOS devices for $9.99. Nintendo has not yet revealed the release date for Android devices.

Take a look below at "Super Mario Run," which earned a rave review from Time.