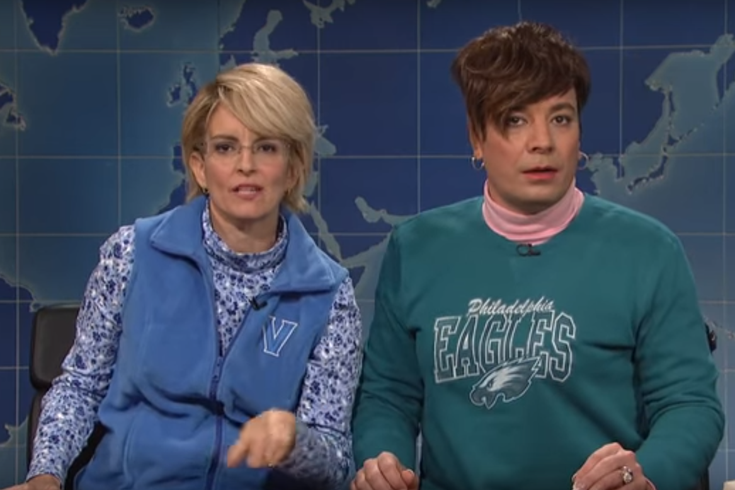 On this week's edition of "Saturday Night Live," Tina Fey and Jimmy Fallon returned to the "Weekend Update" desk as much sought-after undecided suburban Philadelphia voters.

Fey, who was born in Upper Darby, and Fallon were decked out in typical Philly attire for the occasion. Fey rocked a Villanova University sweater vest while Fallon wore an Eagles sweatshirt.

The pair even brought a local delicacy as appreciation for the invite to the show. They handed host Colin Jost hoagies to begin the bit.

There was a lot to unpack in the 6-minute segment because Fey and Fallon, as they usually do, made the most of their time to get in as many jokes as possible.

Here's how Fey and Fallon portrayed the local area residents' unique perspective on the election.

Obviously, Fallon's character didn't like Clinton lying about her emails and Benghazi. However, Fey's character had a problem with how Clinton handled the fact that Bill Clinton has cheated on her. In Philly, "if a girl's been banging your husband for 12 years, at the very least you have to cut her ponytail...When a girl so much as flirted with my husband, I released mice in the drop ceiling of her pizza place," she explained.

While we're all smitten with Tina Fey, here are some other Philly-Delco-South Jersey accent videos

On the other hand, Fey and Fallon didn't take it easy on Republican candidate Donald Trump. They wasted no time as Trump's campaign struggles to survive after his vulgar comments about women were revealed. While an appropriate comparison for the outlandish nominee hasn't been obvious, Fey's character found a perfect one right here in the City of Brotherly Love: the "drunk" Mummers.

"When you are a big star like that, the rules are different. If you have ever been to the Philadelphia Mummers Parade on New Year's... Have you ever been to that, Colin Jost? You should go, it's terrible. Anyways, a lot of the guys in the clown brigade are already drunk and sometimes they might honk your boob on the way down the street. I think Trump is kind of like that," she said.