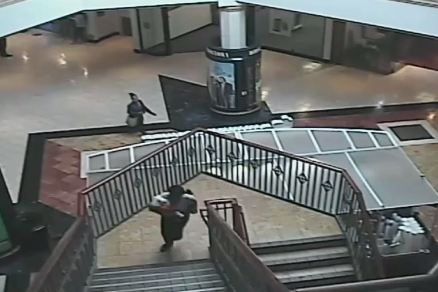 Surveillance footage from King of Prussia Mall of March 31, 2016.

Upper Merion Township police have released a full video of the King of Prussia mall kidnapping that prompted an Amber Alert and a frantic search in Montgomery and Chester counties on March 31.

The suspect, 32-year-old Cherie Amoore, stands accused of befriending a stranger at the mall, joining her and her two children at the food court and later leaving the mall with a 7-week old baby in her arms. Authorities spent five hours searching for the infant before Amoore's family, having seen the Amber Alert and images of the suspect, notified police that she was located at the Tredyffrin Township apartment of Amoore's boyfriend.

The video, obtained by 6ABC, shows a sequence of events similar to what authorities described at the time of the incident.

Amoore is seen conversing with the mother, Malika Hunter, outside of a jewelry store before they and Hunter's older son take a seat at the food court. The stroller is situated next to the table. After some time, Amoore pulls the child out, holds her for a while and, eventually, while Hunter isn't looking, walks away from the food court, climbing a set of stairs and exiting into the lot where her car had been parked.

Amoore, the daughter of Republican Party of Pennsylvania Deputy Chairman Renee Amoore, initially told investigators that she took the child because she was overwhelmed by feelings that reminded her of a newborn she lost after giving birth in February. Prosecutors have not been able to confirm that Amoore ever had a child.

In an interview with NBC10, Hunter, a resident of Philadelphia, said realizing her child had been kidnapped was "the worst feeling I ever felt in my life."

Amoore has told investigators that she did not go to the mall with the intention of kidnapping a child. At a preliminary hearing last month, her defense attorney said she was undergoing mental health treatment.

Charges include kidnapping of a minor, unlawful restraint, false imprisonment, interference with the custody of a child, and concealment of the whereabouts of a child. She remains free on $500,000 cash bail. A formal arraignment is scheduled for June 22.