Watchwords in Philly after terrorism attack: 'Be more observant.'

No credible threats seen, but security stepped up across the US 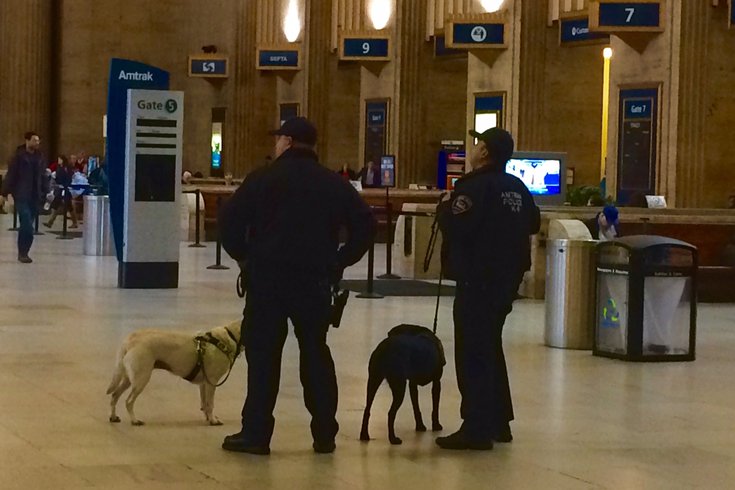 Amtrak K-9 officers keep an eye out at 30th Street Station Saturday, the morning following terrorism attacks in Paris that killed at least 127. There are no specific threats, but the watchwords are be more observent.

The watchwords in Philadelphia as a result of the terrorism attack in Paris are: “Be more observant.”

A K-9 officer for Amtrak said this morning that was the instruction to him and fellow officers when they came on duty Saturday following coordinated attacks that killed 127 and injured many more Friday evening in France.

He and another K-9 officer, as well as additional uniformed Amtrak officials, were keeping an eye on cavernous 30th Street Station, where trains serving the Northeast corridor connect with local rail service.

Hannah Brandon, 27, who’d just arrived at 30th Street from her hometown of Baltimore, was pleased by the security presence, having seen none when she boarded an early train.

“I thought about it, the attack. It was on my mind since I’m traveling. But it can happen anywhere. You can’t live your life afraid of what might happen. You just hope it won’t happen,” she said.

“Amtrak continues to monitor the events in Paris and maintains a strong security posture to keep our passengers, employees and the railroad safe,” said a spokeswoman. “Robust security measures are in place and partnerships with federal agencies to gather intelligence information are underway. There are no specific or credible threats against Amtrak.”

Philadelphia police also said there were no specific or credible threats in the city.

A Philadelphia police spokesman said there would be increased vigilance and asked for the support of the public if they see anything.

A spokeswoman for the Philadelphia airport said,  "the airport does not discuss security measures."

"I'm numb and angry at the same time,” said Philadelphia jazz singer Julie Charnet, who is traveling to Paris next week with her husband, musician Jon Ball. On Saturday, she was aboard Amtrak, bound for Washington.

“I now look at my list of souvenirs to bring home and wonder what else I will bring back with me. I'm excited to go, but less happy. It's more of a resolve to show support now,” she said of her plans to visit Paris again despite the attacks.

Throughout the country, resolve and preparedness, but no credible threats, seemed to prevail.

“The Pennsylvania State Police and Office of Homeland Security are in communication with the FBI and other federal agencies regarding the attacks in Paris and are continuing to monitor the situation for any changes.”

New York, Boston and other cities in the United States bolstered security but law enforcement officials said the beefed-up police presence was precautionary rather than a response to any specific threats.

The New York Police Department said officers from its Counterterrorism Response Command and other special units were deployed.

New York, the site of the Sept. 11, 2001, hijacked plane attacks that killed nearly 3,000 people and destroyed the World Trade Center’s twin towers, is considered a top target for potential attacks.

The top of the Empire State Building and the spire at One World Trade Center were lit up Friday night with blue, white and red, the colors of the French flag.

The Port Authority of New York and New Jersey said police were on heightened alert at all of the agency's bridges, tunnels and rail facilities, as well as at the World Trade Center in lower Manhattan.

U.S. Department of Homeland Security Secretary Jeh Johnson said in a statement that "we know of no specific or credible threats of an attack on the U.S. homeland of the type that occurred in Paris tonight."

The National Basketball Association was increasing security at each of its venues, as is the NFL.

"Security at our games is always at a heightened state of alert," National Football League spokesman Brian McCarthy said.

The U.S. Capitol Police in Washington boosted patrols around the Capitol complex, though a spokeswoman said, "There is currently no known threat to the Capitol Complex."

In Boston, the police department said it deployed additional resources and was working closely with federal authorities, but saw no credible threat in the city, where Islamist militant sympathizers set off home-made bombs at the Boston Marathon finish line in April 2013.