We tried the Philly cheesesteak-inspired Slim Jim; should you? 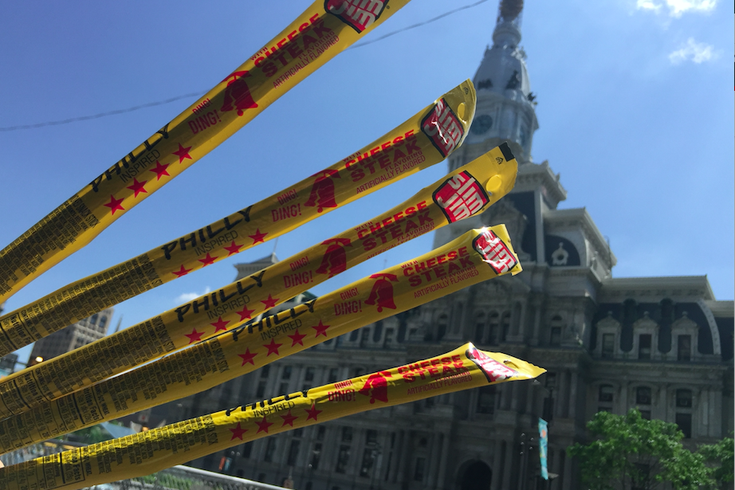 As part of its 'Flavors of America portfolio,' Slim Jim produces a Philly cheesesteak-inspired version of the dried meat snack.

I recently stopped by the Five Below near 15th and Chestnut streets to pick up a fidget spinner for my first-grader son, because that’s what parents are legally, ethically and morally required to do these days.

While waiting in line, I turned my head to the left and noticed a sizable display of Slim Jims into which hungry customers could consider snapping. Amid that display, one offering instantly captured my full attention.

This was something that most assuredly had to be purchased without a moment’s hesitation, so, purchased it was for $1.29.

It was the right decision to make.

Unbeknownst to me before speaking with Adam Beane – ConAgra’s Slim Jim brand manager – after the fact, the pre-eminent dried meat snack was invented by a Philadelphian named Adolph Levis (RIP).

With the Great Depression-mood still looming, but post-Prohibition, the food merchant “realized before the age of little jars of nuts on the bar” that drinkers might like to pair such a snack with their swill.

Then – voila – a culinary staple made further famous by wrestler Randy “Macho Man” Savage was born.

Before we get to the product review portion of this story, the good folks at Slim Jim made sure I knew how this Philly-inspired variation came to be.

Beane called Friday morning to discuss that matter while sharing some details about how it’s made and how the Philly inspired jawn fits into Slim Jim’s “Flavors of America portfolio.”

Though it was the first I’d ever seen the cheesesteak variety, Slim Jim launched wholeheartedly last spring.

It includes “Burnin’ In Buffalo” and the “Cali Taco” smoked snack stick varieties with plans to introduce New Mexico Fajita and Texas Chili products in 2018. Also in the pipeline is an homage to a Chicago Deep-Dish Pizza inspired beef-and-cheese line addition.

“We’re really trying to hit on big American classics,” Beane said, noting that Slim Jim’s association with a “quick-and-easy, on-the go” treat is a driving force behind it. “What better way to get into the road-trip bloodline that tying in regional favorites?” 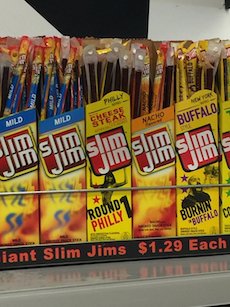 Of the three existing flavors, Philly Cheesesteak “may even be at the top of the list,” he said, noting they’ve gotten “very positive feedback."

The local version has met the company’s sales expectations and “we intend to keep it for the forseeable future."

He explained that all of the base Slim Jim sticks come from the “same meat source: Beef, pork and chicken and a proprietary blend” with herbs, spices and the like.

As it pertains to the cheesesteak variation, the “culinary experts we have in our research kitchens sought out the most authentic taste … the peppery taste of the steak, the onions and peppers.”

So, what’s the verdict? Well, I grabbed a few Slim Jims and passed them out for folks to share reviewing duty.

While my bride maintained that “it just takes like a non-spicy Slim Jim,” I caught – upon eating a second one – some hints of cheesesteak therein. (Would buy again if the mood struck.)

This is similar to what others at PhillyVoice’s International headquarters thought. Here’s one response:

“As someone who has never had a Slim Jim until now (insert 'flushed' emoji here), I was surprised that I liked it,” said Sinead Cummings.

“The first bite didn't taste like cheesesteak, but the next bite had more of that Philly flavor. My verdict: Just go buy a cheesesteak if you're craving one that badly. We live in Philly. We don't need cheesesteak flavored foods. We have the real thing.”

Not satisfied to contain it to in-house reviews, I took a couple over to City Hall on Friday morning to get a variety of takes.

Dyshana and Omary at the security desk by the northeast entrance were more than happy to give them a try. Omary noted that she’d even had a plain Slim Jim that very morning.

“I like the first bite, but not really after that,” she said. “The original is always the best, right?”

Dyshana noted that “it really does taste like a cheesesteak,” noting that she could sense hints of the vegetables and spices therein.

“Mmm hmm, it’s good. You can see I’m eating the rest of it,” she noted. “I wouldn’t buy it, though. (It falls short when) compared to the original. It’s not bad, though!”

While Dyshana was still nibbling away, Fire Commissioner Adam Thiel declined an offer but deemed it an intriguing idea that he’ll try, should he see one while out and about.

I also handed one to Mayor Jim Kenney as he was walking out of the building for a Friday afternoon event. While he seemed excited by the opportunity, wondering whether it was aligned with any particular steak shop, I didn't hear back before this story was written. (I'll be sure to add something should he weigh in post-publication.)

In conclusion, for the science and foodie nerds reading this – Hi! – here’s a Wired video about what goes into the Slim Jims into which many of us snap.