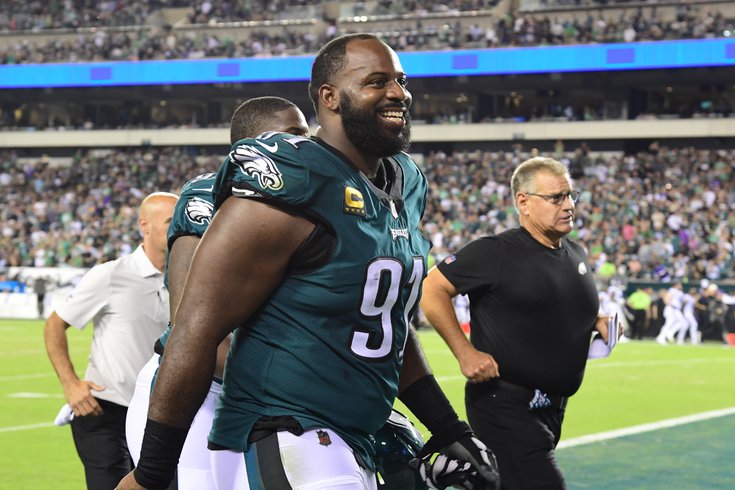 Fletcher Cox is good again, and the Eagles' defensive line has been dominant.

For the gambling enthusiasts, here are my Week 4 NFL picks. To note, the team logos indicate who I think will win the game, not cover the spread. At the end of the picks, I'll note a few teams that I like based on the spread.

Dolphins at Bengals (-3.5): Yeah, the Bengals went to the Super Bowl last year, and Joe Burrow looked like a stud in doing so. Cool. It's a new year, and the loser of the Super Bowl often falls off the following season, while teams that didn't even make the playoffs emerge. If you had no preconceived notion of what was supposed to happen this season and you watched each of these two teams play their first three games, there's no way anyone would say the Bengals are better. I'm betting on the now, not the last year. Sometimes the lines are slow to adjust.

(I guess this is also sort of a bet that Tua Tagovailoa will play, but even if he doesn't the Dolphins have a capable backup in Teddy Bridgewater.)

Vikings (-2.5) at Saints (in London): In the Hierarchy this week, we noted that Kirk Cousins is a stud during 1:00 p.m. games against weaker opponents, but he shrivels in primetime and/or against good teams. We then wondered if the 9:30 a.m. EST kickoff time would make Cousins an MVP-level player, or if the added international exposure would make him bad again?

Jameis Winston might not play (we'll see), and there's a reasonable enough argument that the Saints would actually be better off starting Andy Dalton with the way Winston has performed in the wake of the report that he's playing with four fractures in his back.

But clearly, this Vikings team is more talented than the Saints, and also significantly healthier, as the Saints could also be without Michael Thomas and Jarvis Landry, who did not practice on Wednesday.

Jaguars at Eagles (-6.5): The Jaguars are not a pushover anymore. Trevor Lawrence had the disadvantage of entering the NFL with a clown of a head coach, but he is settling in nicely in Year 2 under Doug Pederson. Lawrence has a nice trio of receivers led by Christian Kirk, and an intriguing one-two punch at running back in James Robinson and Travis Etienne.

Defensively, the Jags get after the passer, as Josh Allen and Travon Walker could be a star edge rushing duo in Jacksonville for the foreseeable future.

That said, the Eagles still match up favorably against this team:

The Eagles also own the most lopsided advantage in this matchup. The Jags' offensive line still has a ways to go, particularly on the interior, where the Eagles have looked stellar through the first three games.

Browns (-1.5) at Falcons: I tried to talk myself into taking the Falcons to win this game outright, but the Browns have more firepower on offense, and Jacoby Brissett has actually played pretty well. This morally corrupt team might actually be in good shape when Deshaun Watson returns from his suspension.

Commanders at Cowboys (-3): The Eagles are second in the NFL in sacks, with 12. The Cowboys are first, with 13.

Carson Wentz was sacked nine times and hit 17 times by the Eagles on Sunday, which we all saw, but that was nothing new. He was was also sacked five times and hit 11 times by the Lions Week 2. The Commanders can't protect Wentz, and Wentz doesn't have the mental capability of changing the way he plays. Expect Wentz to give the ball to the Cowboys one way or the other in this matchup.

Seahawks at Lions (-4): The Seahawks are in the conversation for worst team in the NFL, while the Lions have at least begun to look like a legitimate NFL team, even if they haven't finished off some games. I think this is the week they stomp someone.

Titans at Colts (-3): I have no feel for either of these teams, and no desire to try to get one until I have to later this season when the Eagles play them.

Bears at Giants (-3.5): Barring a tie (and this game does have some tie potential), one of these trash teams will be 3-1 at the end of the day on Sunday.

Jets at Steelers (-3): Zach Wilson will make his first start of the season in Pittsburgh on Sunday. Unfortunately for him, there's this:

I can't think of many reasons to like the Steelers, but the Jets have more downside.

Bills (-3) at Ravens: This is a matchup between a pair of top 5 teams. Above we noted that one of the Bears and Giants will be 3-1 after this week. Well, one of these teams will be 2-2.

Even in a loss to the Dolphins last Sunday the Bills were kinda dominant.

Like, if you didn't know the outcome of that game, you'd think the Bills won by 30.

The Bills might very well be the best team in the NFL, but they've had trouble winning close games. In games decided by a touchdown or less last season, they were 0-6. In games decided by more than a touchdown, they were 11-1. In other words, they're either blowing teams out, or they lose. This game should be close. We'll see if they can finish. It's too bad this isn't a primetime game.

Chargers (-5) at Texans: Ah, the team that always screws me when I think they might be good (the Chargers) against the team I know is terrible but somehow seems to cover spreads whenever I go against them (the Texans). I'm not touching it.

On a side note, Brandon Staley let an injured Justin Herbert keep playing in a blowout on Sunday against the Jaguars because Herbert wanted to be out there with his teammates. That's admirable and all for Herbert. You like to see that kind of toughness, I guess. But if you're the head coach, get your franchise player the hell out of the game, lol.

Cardinals at Panthers (-1.5): I felt that the Cardinals had high fraud potential heading into 2022, but I did not foresee them being underdogs to a Panthers team that has looked as bad as expected. Still, give me Kyler Murray over Baker Mayfield all day.

Broncos at Raiders (-2.5): Somehow the Broncos are 2-1 despite their head coach trying to torpedo their season.

They've been an absolute mess to watch, and the 0-3 Raiders are in "must win" territory.

Chiefs (-1) at Buccaneers: This game will be played in Minnesota if Hurricane Ian prevents it from being played in Tampa. I like the Chiefs either way, as the Bucs' offense has looked very stoppable the first three weeks of the season. They still don't have a first half touchdown.

Rams at 49ers (-1.5): The 49ers have owned this rivalry in recent years, as they have won the last six regular season matchups. Of course, the Rams beat the Niners in the game that really mattered — the NFC Championship Game last year. This game feels a lot like the Bucs-Saints game earlier this year, in that the line felt slanted toward the Saints since they had beaten Tom Brady convincingly in the past, but yet they were the pretty clearly less talented team.

The Rams are more talented than the Niners. Are we even sure the Niners are good? Give me the Rams, and oh hey I get points, too? OK.

Here's how that Chiefs game went on Sunday:

The Bills, Chiefs, and Bucs all lost their Week 3 matchups. Does that mean it’s time to worry?@SheilKapadia and @BenjaminSolak break down why it’s way too early to even consider being worried about these teams’ losses.