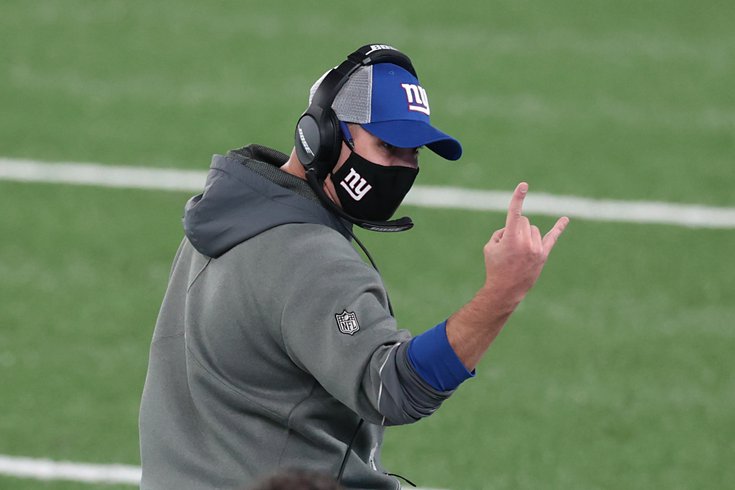 Eagles fans will feel Giants fans' pain this Sunday, when they are forced to root for Joe Judge and the Giants.

While we won't be reminiscing about the Eagles' win on Sunday in Santa Clara over the Niners in 10 years, it was a win nevertheless, and the Birds now hold sole possession of first place in the NFC East, the worst division (by far) in the NFL.

And so, we'll continue on plotting the ideal outcomes for other games around the league as if the Eagles have a chance to contend (though they probably don't) this season.

• Rams at Football Team: The Football Team is going to be in the market for a quarterback in the 2021 NFL Draft now that they have stupidly benched Dwayne Haskins, so at some point it will be ideal for them to win some games. That time isn't now, yet. Haskins has to have some support in that locker room, right? So if his replacement, Kyle Allen, falls flat on Sunday, players may begin to lose confidence in the coaching staff's ability to make reasonable football decisions.

• Panthers at Falcons: The Falcons are 0-4 and the Panthers are 2-2, so it's probably best if they even out a bit.

• Bengals at Ravens: The outcome of this game doesn't matter, but it's at least worth keeping an eye on since the Eagles play the Ravens Week 6.

• Giants at Cowboys: The Giants are the worst team in the NFL, in my view, and after the poor season that Daniel Jones is putting together, they could be looking for another quarterback in the 2021 NFL Draft, just like the Football Team. Therefore, it's not the worst thing for the Giants to pick up a few wins along the way, and there's no better time for the Eagles' purposes than for that to be against the Cowboys.

The Cowboys, by the way, are now down both of their starting offensive tackles, so it's hard to imagine them seriously contending for anything this season other than the crappy NFC East.

• Colts at Browns: The outcome of this game doesn't matter, but the Browns are of mild interest in that they're an Eagles opponent later this season (and they might actually be good?).

• Vikings at Seahawks (SNF): The Seahawks aren't a factor to the Eagles anymore, since they are clearly going to be a playoff team, and the Eagles aren't likely to come close to catching them. The Vikings, meanwhile, are 1-3, but more talented than that record would indicate.