In past seasons, Philadelphia Eagles fans generally rooted for their own team, and kept an eye on the rest of the NFC, with a focus on the NFC East. They'll still do that in 2021 (for now, I guess), but there are even more peripheral rooting interests for Birds fans this season because they own 2022 draft picks from other teams.

And so, each week we'll lay out a rooting guide for non-Eagles games on the NFL schedule, and yes, I'm aware that most of the below is obvious. You can also check out the latest Week 8 odds and read all my picks, here. 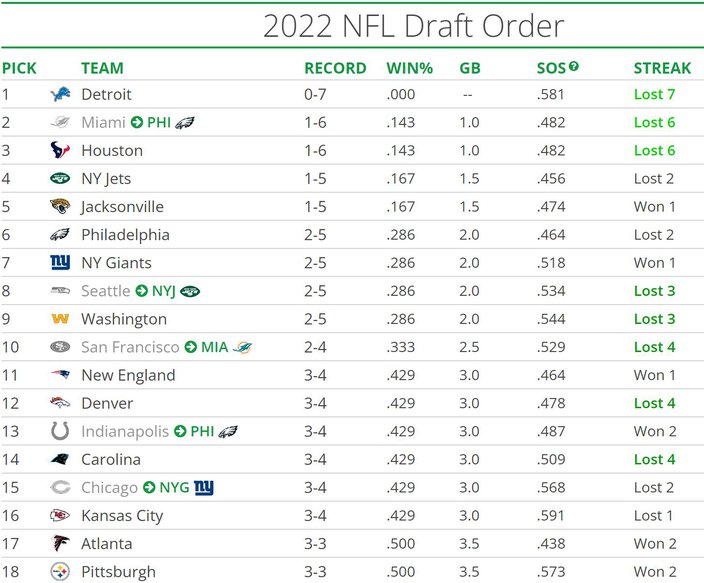 MORE: Five college prospects who could interest the Eagles in the 2022 NFL Draft | Eagles-Lions injury report, with analysis

The concern with the Titans all but wrapping up the division so soon is the thinking that the Colts would eventually just bench Carson Wentz so that he doesn't hit playing time benchmarks that would cause the second-round pick the Colts owe the Eagles to become a first-round pick.

However, even with a divisional title out of reach, it feels very unlikely that the Colts will bench Wentz, mainly because (a) Wentz is playing reasonably well enough that they won't want to piss him off by benching him for draft positioning, and (b) the Colts will still be in wildcard contention. The division leaders currently are the Titans, Raiders, Bengals, and Bills. A look at the AFC wildcard race otherwise:

As you can see, the Colts are currently within one game of the 7 seed Browns. The Colts still have games upcoming against the Jets and Texans, as well as two games against the Jaguars. They have plenty of highly likely wins left on their slate of games.

The most ideal scenario for the Eagles is if Wentz hits his playing time benchmarks (duh) while also missing the playoffs, and in my view, a loss to the Titans is the best outcome this weekend to help achieve that.

• Steelers at Browns: It's best if the Colts keep pace with the 7 seed Browns, in case the Colts lose to the Titans.

• Dolphins at Bills: The Dolphins' first-round pick, owned by the Eagles, has an outside chance to be No. 1 overall. It has a very good chance of landing in the top 5.

• Bengals at Jets: The more games that NFL doormats like the Jets win, the better it is for the Eagles' chances of that Miami pick ending up as high as possible.

• Rams at Texans: The Texans are probably even more of a doormat than the Jets.

• 49ers at Bears: The Giants own the Bears' first-round pick , so more games they win the better.

• Panthers at Falcons: Both of these teams suck. It's just good that one of them will win. I don't think it matters much which one that is.

• Jaguars at Seahawks: Again, the more games that bottom feeders like the Jaguars win, the better it is for the chances of that Miami pick becoming a high a pick as possible.

• Football Team at Denver: Both of these teams are bad, so this game is worth monitoring for draft slot purposes. It's best if Washington wins games and puts them out of position for a top QB prospect again.

• Patri*ts at Chargers: The Patri*ts are 3-4, while the Chargers are 5-2. It's best if the AFC teams move closer toward 0.500, so the Colts stay within striking distance of a wildcard berth.

• Buccaneers at Saints: Do you want Dallas to win a Super Bowl? No? Then you better root for the four other Super Bowl contenders — the Bucs, Packers, Cardinals, and Rams — to earn better seeds than them. As long as there isn't a result that could directly impact the Eagles' draft positioning, like Rams-Texans above for example, root for those other good teams.

• Cowboys at Vikings: The Cowboys are extremely likely to win the NFC East. If you don't want to see them do damage in the playoffs, it's best if they get the four seed, which means they'll have a difficult opponent in the wildcard round, and (likely) road games against other very hard opponents the rest of the way. A loss to an NFC team would help in them ending up with that 4 seed.

• Giants at Chiefs: The Giants aren't good enough to make the playoffs, so the more games they win the better, in hopes that (a) they somehow keep hope alive for Joe Judge and Dave Gettleman to remain with the team, and (b) they wreck their 2022 draft positioning.