What they're saying: A bunch of Eagles players are (apparently) on the trade block right now 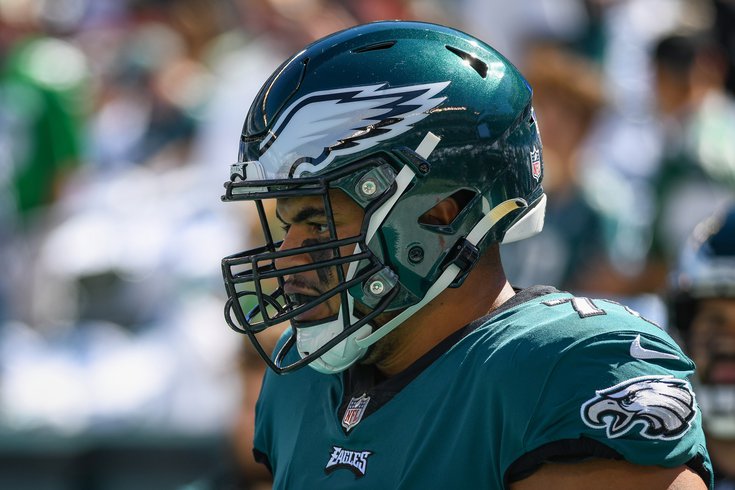 PHILADELPHIA - SEPTEMBER 19: Andre Dillard #77 of the Philadelphia Eagles looks on before the game against the San Francisco 49ers at Lincoln Financial Field on September 19, 2021 in Philadelphia, Pennsylvania. (Kate Frese for PhillyVoice)

The NFL trade deadline is early next week and the Eagles are clearly not destined for greatness this season, boasting a 2-5 record with little hope of making a playoff run this year.

With so much draft capital already on the ledger heading into the 2022 offseason, it would make sense for Howie Roseman and the Eagles front office to do whatever they can to enhance their ability to make a big splash, via the draft, free agency and the trade market, come the spring.

And so, you have no doubt seen rumors fly about certain players being traded away in an Eagles semi-firesale.

They already shipped out Zach Ertz and Joe Flacco for draft picks. More has to come, right?

Around the internet, dozens of fake trades have been contemplated. Some of them are reasonable. Some are not. We've done our best to breakdown the viability of several of these trade contemplations in our latest 'What they're saying about the Eagles.' Take a look:

In recent days the Andre Dillard reports have ramped up a bit, with teams like the Titans being linked to the former first round pick. With several contenders in need of offensive line help or depth, the Birds may be able to get decent value here. Here's a breakdown from former PhillyVoice writer Hermann of two other teams that have been the subject of Dillard rumors in recent days:

ESPN insider Jeremy Fowler seems to feel that way, too. In a column Wednesday discussing the trade buzz he's heard from league sources, Fowler reported that the Eagles have a player of interest who might be moved before Nov. 2.

Here's what Fowler had to offer:

"It wouldn’t be a shock to see an AFC North team call Philly about offensive tackle Andre Dillard, who is considered to be on the block. Browns and Ravens have had depth issues there."

Hmm. This feels like a very specific trade rumor. Normally when an insider is naming a particular division, and then particular teams, it's not just off-the-cuff speculation. It's reminiscent of how specific FOX Sports insider Jay Glazer was about a Zach Ertz trade less than 24 hours before the tight end was dealt. I would imagine both the Browns and Ravens have legitimate interest in Dillard.

NFL.com's Ian Rapoport reported over the weekend that teams around the league believe a "quality second-day pick" would be enough to wriggle Dillard away from the Eagles. Rapoport also reported there are scenarios where Dillard is in the Eagles' long-term plans. [NBCSP]

I am not entirely sure if Iyer has heard teams talk about trading for Barnett, or if he just looked at the Eagles expiring contracts (technically) going forward but Barnett is going to be off the Eagles roster at the end of the year, and the team would no doubt like to get something for him. But, that is super duper unlikely and Iyer, according to our Jimmy Kempski, is wrong about his trade viability. First, here's what he wrote:

The Eagles' second entry is another first-rounder, an older one from the 2017 draft they are bound to let walk in pending free agency given his sack-less 2021 season. Barnett has dropped off badly in the new non-wide nine scheme after having six sacks and playing well all-around in 2020. He could benefit from joining a better-tailored 4-3 team. [The Sporting News]

But Barnett very unlikely to be moved. The Eagles restructured his contract a few months ago, and if they traded him, they’d take a dead money hit of over $9 million, after converting his base salary into a bonus. An acquiring team would get him on an extremely cheap salary if they traded for him, but as such the Eagles' expectation would be that they receive a premium on the draft pick compensation for him in return. It's hard to imagine anyone lining up to overpay in a trade for a player with no sacks in seven games this season. It's also perhaps worth noting that if Barnett walked in free agency, he would qualify toward the compensatory pick formula. So no dice on this one.

This story also mentions Dillard as one of their 15 players most likely to be traded prior to the deadline.

Another interesting rumor over at SI is that the Eagles may be willing to move their linebackers. Which makes sense if they are truly rebuilding and if they do not see many of their current pieces as starters on a Super Bowl team. Unlike with Barnett, Eric Wilson and Alex Singleton have contracts that would be easier to move. But would Philly really be willing to get even worse at LB for what will surely be late round draft picks in return?

The Eagles have a couple of linebackers, Eric Wilson and Alex Singleton, who’ve made starts this year who could be had. And of course, Philly’s 2019 first-round left tackle, Andre Dillard, has been discussed, and could be a reclamation project for someone. [Sports Illustrated]

For context, we should mention that Breer starts by saying "here are some players being discussed ahead of the deadline, with one important caveat: Teams aren’t necessarily shopping the guys on this list. In some cases, these are notes resulting from another team calling to ask …"

Another typically reliable news source, another impossible trade. For whatever reason, the prognosticators across the internet don't seem to have the time or interest in researching the true viability of the trades they are suggesting. At CBS, Benjamin proposes one trade that he thinks each team should make. And I suppose there is an argument to be made that trading Fletcher Cox would have some great benefits to the Eagles.

However, the likeliness of it happening are near zero, as Kempski reported two days ago, thanks to the Eagles' decision to wildly restructure his deal in a way that made the cap hit decimating. And so we'll show you what Benjamin wrote, but it's worth checking out what Kempski wrote right here to get some context as to why Cox will not actually be moved in any way shape or form.

Howie Roseman probably won't, because dealing Cox would signal to the locker room that 2021 is basically a lost cause. But how could you not listen to calls considering Javon Hargrave's emergence and Cox's massive contract going on 31? [CBS Sports]

Despite his being injured right now, there are many who think Sanders is still a viable trade candidate. Kempski explored that earlier this year when he contemplated that Sanders was among the Eagles players most likely to get moved before the deadline. Here's BR's take on Philly's under-utilized running back:

There are several teams that could use an upgrade at running back. The Baltimore Ravens, Kansas City Chiefs and San Francisco 49ers all spring to mind. All would likely get more use out of Sanders and be willing to send something in return to add him to their offense.

As an added bonus, Sanders still has one more season on his rookie contract so the team would have him for cheap again in 2022.

That could be important as Sanders recently suffered an ankle injury that is expected to be "week-to-week." Knowing that he could be an important weapon for an offense for the next season-and-a-half makes him an intriguing trade prospect. [Bleacher Report]

And finally a player the Eagles will not be involved in trading. Amid growing rumors that Deshaun Watson may indeed be on the move (likely to Miami, or perhaps Carolina), reports suggest the Eagles are done kicking the tires on the superstar mired in legal troubles.

During the initial rumors surrounding a potential destination, both the Denver Broncos and Philadelphia Eagles had been reported as interested. According to Texans beat reporter Aaron Wilson, the Eagles even went as far as to contact Watson’s legal team. However, on October 24, John McClain reported that Watson had not approved a trade to Philadelphia. [Pro Football Network]